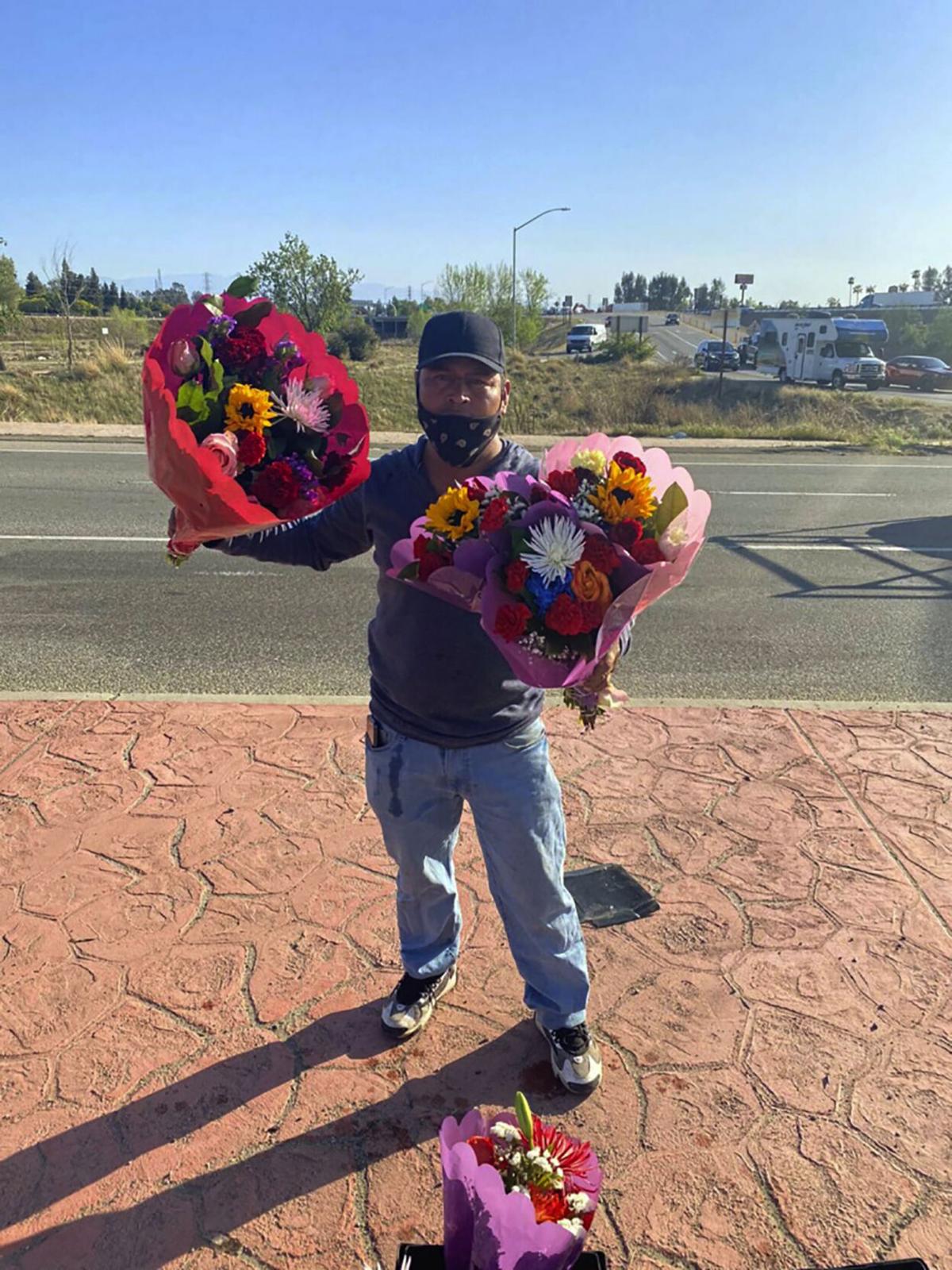 Street vendor Felicito Chavez displays some of his flowers for sale. Money from sales is sent to his sons in Guatemala. 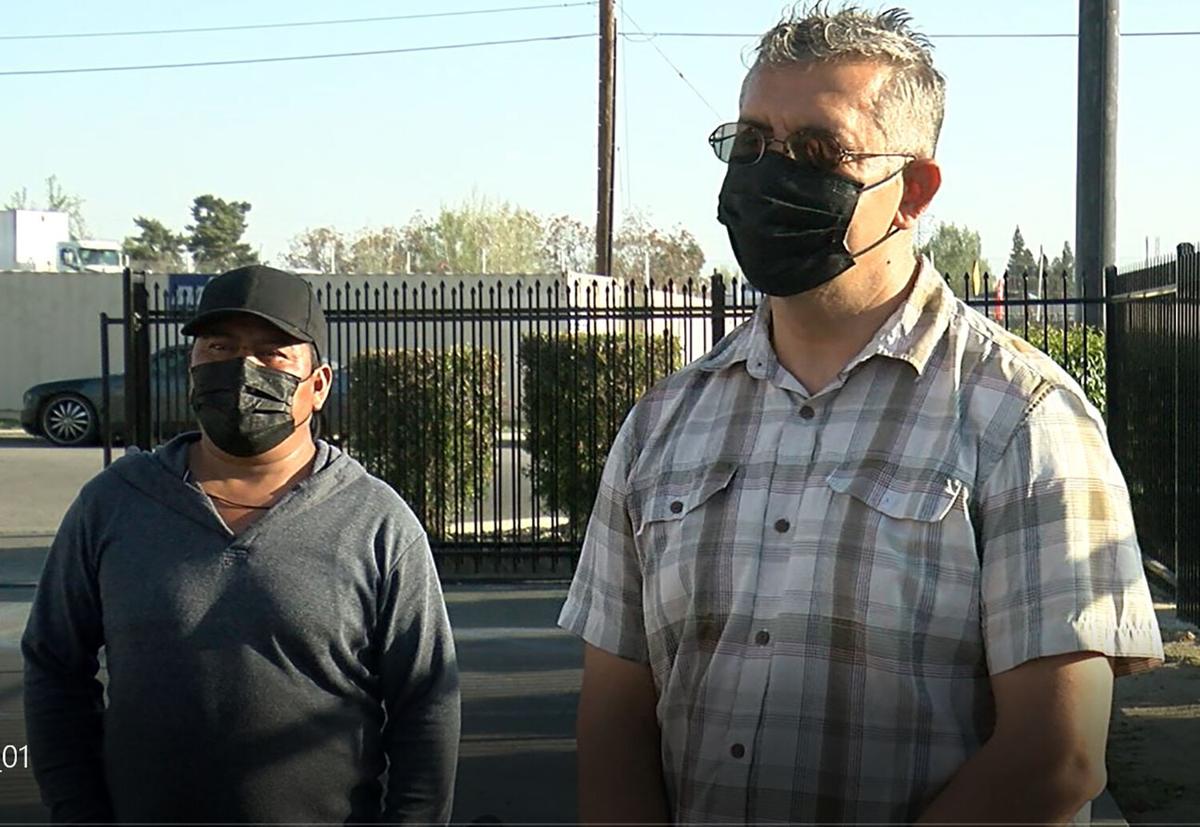 Felicito Chavez, left, stands next to Gabriel Baez, who stopped to help Chavez, who was being being attacked by a homeless man. 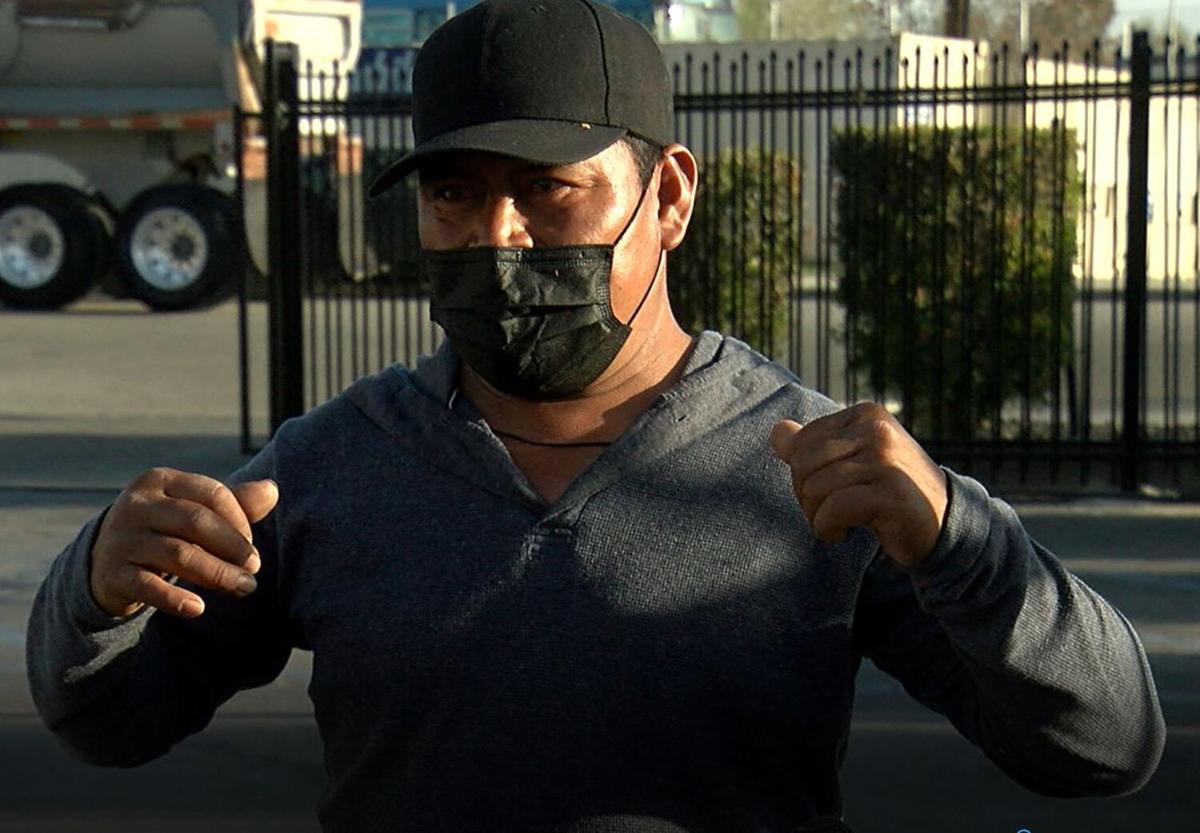 Felicito Chavez talks about what happened to him as he was selling flowers. 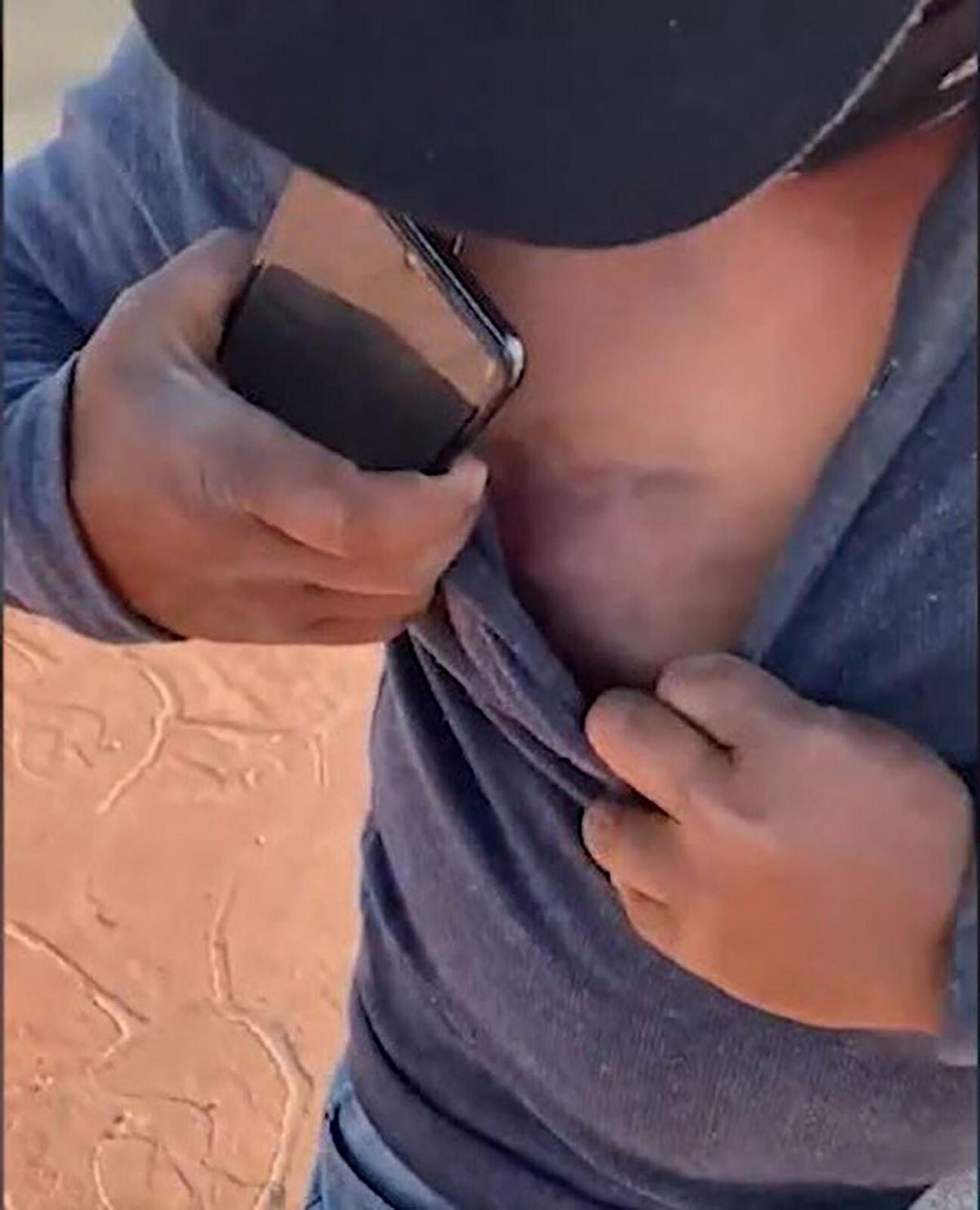 Felicito Chavez shows bruises he said were caused after being struck in the chest by a homeless man. 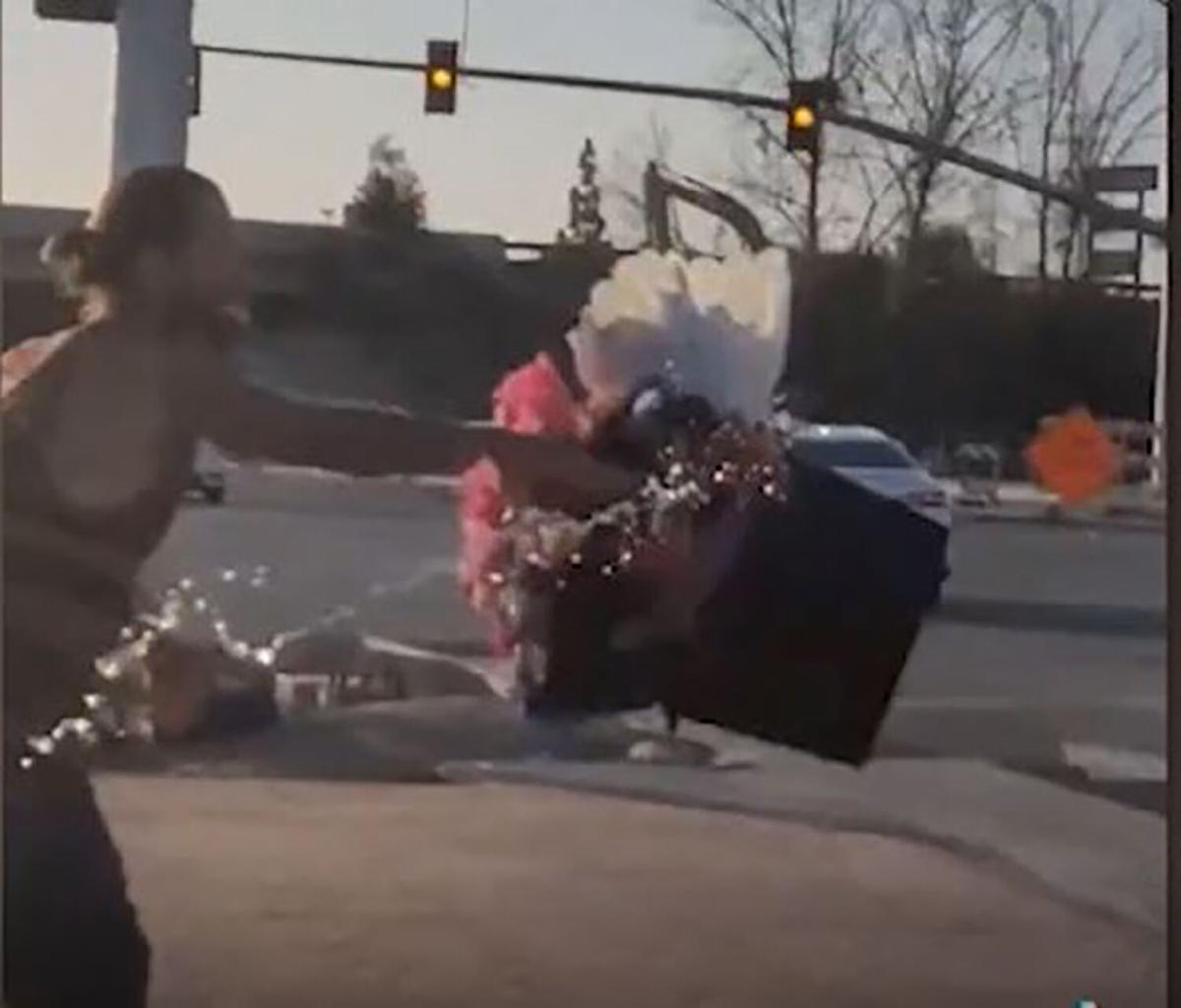 A homeless man throws Felicito Chavez's bucket of flowers on the ground.

Street vendor Felicito Chavez displays some of his flowers for sale. Money from sales is sent to his sons in Guatemala.

Felicito Chavez, left, stands next to Gabriel Baez, who stopped to help Chavez, who was being being attacked by a homeless man.

Felicito Chavez talks about what happened to him as he was selling flowers.

Felicito Chavez shows bruises he said were caused after being struck in the chest by a homeless man.

A homeless man throws Felicito Chavez's bucket of flowers on the ground.

The homeless man was irate. He was screaming and threatening a street vendor who had the audacity to post himself at the island on Rosedale Highway and Buck Owens Boulevard and was working away selling flowers.

But the angry bearded man would have none of it. He grabbed a couple of buckets of flowers the vendor was selling and threw them on the ground, raising his arms afterward as if to say, "What are you going to do about it?"

In reality, there was not much Felicito Chavez could do to stand up against a man much taller and stronger than Chavez, who is approximately 5 feet 7 inches tall. Fortunately, a family passing by witnessed the harassment, made a U-turn and returned to intervene on behalf of the hapless flower vendor.

"We're fed up with everything that's going on and we want to make sure that does not happen again," said Gabriel Baez, the good Samaritan who, along with his wife and 19-year-old daughter, Itzell Baez, went to help the vendor.

It was a Sunday afternoon around six and the Baez family could easily just have driven by as did others at this busy intersection. Risking their own safety against a man who may or not have been armed did not faze them.

"We thought it was the right thing to do," said the father.

While Gabriel was calling 911, his wife confronted the man who was yelling and daughter Itzell started recording video on her cell phone. Then other motorists also stopped, telling the irate homeless man to stop and leave Chavez alone. Baez followed the bearded man as he finally walked away to make sure he didn't come back, said Baez. Itzell posted the video and it went viral.

It could have gone worse for Chavez, an immigrant who began selling flowers two years ago so he could send money back to his sons in Guatemala. Prior to the family arriving to help him, Chavez said, the homeless man had punched him in the chest with some sort of object in his hand, leaving a bruise clearly visible. And it's not the first time something like this has happened. A couple of months ago three men took his backpack, ID and cell phone.

"What could I do? There were three of them," said Chavez, who speaks in a soft voice.

Compounding the issue is that street vendors may not report being attacked or robbed.

"I absolutely believe it is an under-reported crime," said Bakersfield police Sgt. Robert Pair. "Often we will get witnesses reporting these incidents as opposed to a cooperating victim. It can be difficult to build trust between the victim and law enforcement and I’ve seen it impacted by the victim’s life experiences and perception of police in their country of origin, regardless if that is Southeast Asia, the Middle East or Latin America."

Or victims may be undocumented immigrants who prefer to keep quiet, fearing deportation if they speak up. Worse, street vendor robberies sometimes turn deadly. That was the case last month when a street vendor in Fresno was gunned down by a man who pretended to be a customer. The suspect shot 45-year-old Lorenzo Perez in the head, killing the father of four young children. Same thing happened in November with the robbery and killing of another street vendor in Fresno.

Now one local group is doing something to help street vendors to protect themselves.

"When I saw that video, it made me very angry, it broke my heart to see this type of thing happening in our community," said Aimee Stribling, who is part of an activist group called "661: Voices Heard." "I said to myself, 'I can't stay home and do nothing.'"

Along with fellow member Erika Harris, the pair reached out to Chavez and asked if he needed financial help. In a matter of days they raised $9,265 and gave the money directly to Chavez, who was visibly moved by the gesture of strangers helping him. But Stribling and Harris say the issues go further than one man.

"We're hoping to bring awareness to the community about the plight of street vendors and the dangers they face by being alone," said Harris.

Efforts are underway to offer vendors self-defense classes, provide them with key chains with mace and a sound alarm. The eventual goal is to provide them with a body camera to document any incident, said Harris. The Baez family is also helping out Chavez. Itzell Baez began a GoFundMe account and so far it has generated $7,552.

After killings and robberies of street vendors in Fresno, city leaders there said last month the city will sponsor the creation of a food vendor association. The goal is to work together on ideas for better safety, also equipping them with sirens and cameras, and coordinating with police. It'll also help vendors obtain city and county permits. Hmmmm ... anyone with the Bakersfield City Council or Kern County Board of Supervisors listening?

I asked Felicito Chavez if he feared his attacker may have done more serious harm had the Baez family not intervened on his behalf.

"If it wasn't for them, who could help me against this man?" said Chavez, his voice quivering a little. "God bless them and all those who are helping me. I am very grateful."

To view the video of the attack, go to: https://www.kget.com/news/local-news/video-flower-vendor-attacked-harrassed-by-man-panhandling/