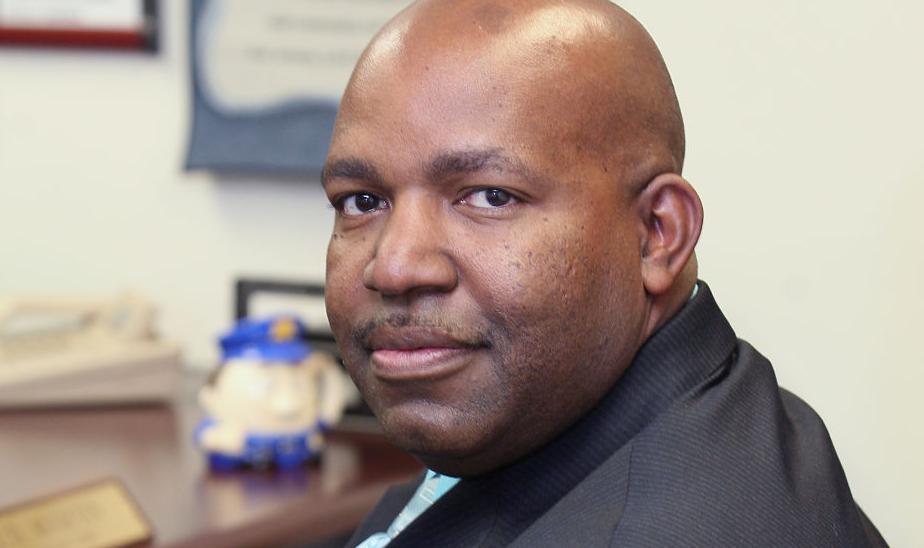 Lyle Martin has been selected as the new Bakersfield police chief.

The other day I caught up with Bakersfield Police Chief Lyle Martin and we had an interesting talk as we walked around Jefferson Park. He's been on the talk circuit lately focusing on speaking to Latino students at various high schools around Bakersfield. Addressing a group of Latino students at Foothill High School, he's hearing some very real concerns from students.

"I had girls come up crying 'cause they're being told these stories that the police department is coming out to round up undocumented immigrants," said Martin. "That's absolutely not true."

It's not hard to figure out why students and others would be thinking this way. In an executive order issued Jan. 25, our new president has kept his promise to crack down on finding and deporting undocumented immigrants. Trump wants city cops and sheriff's deputies to help Immigration and Customs Enforcement be part of that effort.

Titled, "Executive Order: Border Security and Immigration Enforcement Improvements," part of it reads like this:

"Sec. 8. Federal-State Agreements. It is the policy of the executive branch to empower state and local law enforcement agencies across the country to perform the functions of an immigration officer in the interior of the United States to the maximum extent permitted by law."

I can't think of a better way to sow mistrust between law enforcement and the Latino community than have the cops start acting in collusion with ICE. If you are undocumented, why would you report a crime or come forward as a witness when the very people who are supposed to protect you might be the ones to deport you?

"That's not what we do, we're here to serve local communities, deal with local issues," he said, adding that the department has neither the time nor resources to turn into ICE agents.

This is not to say that BPD will stop cooperating with federal agencies such as ICE. In fact, around 1998 or so I was called out to east Bakersfield where BPD cops were stopping drivers with expired tags. When drivers failed to produce a license and vehicle registration, Border Patrol agents who just happened to be standing nearby took the driver into custody.

Then-BPD spokesman Mike Cantrell told me the practice was "nothing new." That's no longer the case. BPD Policy 428 adopted in 2012 states: "Bakersfield Police Department does not independently conduct sweeps or other concentrated efforts to contain suspected undocumented aliens."

Echoing similar thoughts about the issue is Kern County Sheriff Donny Youngblood, who got straight to the point.

But like BPD, there are exceptions in cooperating with ICE.

"We're going to assist our law enforcement partners and make an arrest of bad people," said the sheriff. "(But) if ICE calls and says, 'We're going to go out and do a raid on a farm,' sorry, we're not agents and we're not interested."

Fueling much of this fear in the community about raids and deportations is what is disseminated on an almost daily basis from the Trump administration. While Trump would like you to believe that only those with felony criminal records will be targeted, that's not the case. The reality is that any undocumented person with a clean record is subject to being picked up and deported if he or she is at the wrong place at the wrong time.

So now law enforcement agencies everywhere appear to be taking steps to address the issue. California Attorney General Xavier Becerra came to Bakersfield earlier this month and weighed in on the issue.

"I have an obligation as the attorney general to make sure the laws of the state of California are enforced to protect everyone, everyone!" said Becerra.

Not being left behind is the Delano Police Department. It posted the following message on its Facebook page:

"We encourage all people who may be victims of crimes or witnesses to crime, to continue to come forward and assist law enforcement, without fear that our officers will try and determine anyone’s 'status.' We do not arrest based on one’s immigration status."

The Arvin and McFarland police departments have similar policies.

So Chief Martin had a thought. Perhaps, he said, he and his colleagues in other agencies need to get together and record a Public Service Announcement to assure everyone that their officers/deputies will not turn into immigration agents and start snatching up people. You can record it at Telemundo, chief.

Contributing columnist Jose Gaspar is a news anchor for KKEY, Telemundo Bakersfield. Email him at elcompa29@gmail.com. His work appears here every third Monday; the views expressed are his own.

Mr Gaspar thinks local police would be "colluding" with ICE by following Trumps "insane" Executive Order. The insanity is allowing the illegal aliens, undocumented is a liberal term, take advantage of our Nation's civil nature. They disrespect our laws and have no respect for the sovereignty of our nation. Those here legally on work visas have nothing to worry about and are protected by our laws. My wife said her mostly Hispanic kindergarten students would not stand and say the pledge of allegiance. Their parents told them not to. Our Country was built on backs of immigrants who came here to embrace the freedom and opportunity offered by this Nation. But if those who come here only to take advantage of the lack of enforcement of our laws, then let them suffer the consequences.

In other news, Chief Martin stated that the Bakersfield Police Department will no longer arrest Burglary suspects, referring to them merely as "Undocumented House Guests."

Aliens who come to this country legally and carry work visas should have no fear of deportation. Anyone here illegally is a felon and should be deported. They have taken advantage of this Country long enough.

Perhaps Mr. Martin should post the laws he intends to enforce....

Funny, the appointed not elected state A.G. Says it's his duties to enforce state law. Law enforcement oaths are for all laws not just state laws. Obamas undocumented wording doesn't change the fact they are here illegally. They are law breakers. I guess only in California can they pick and choose.