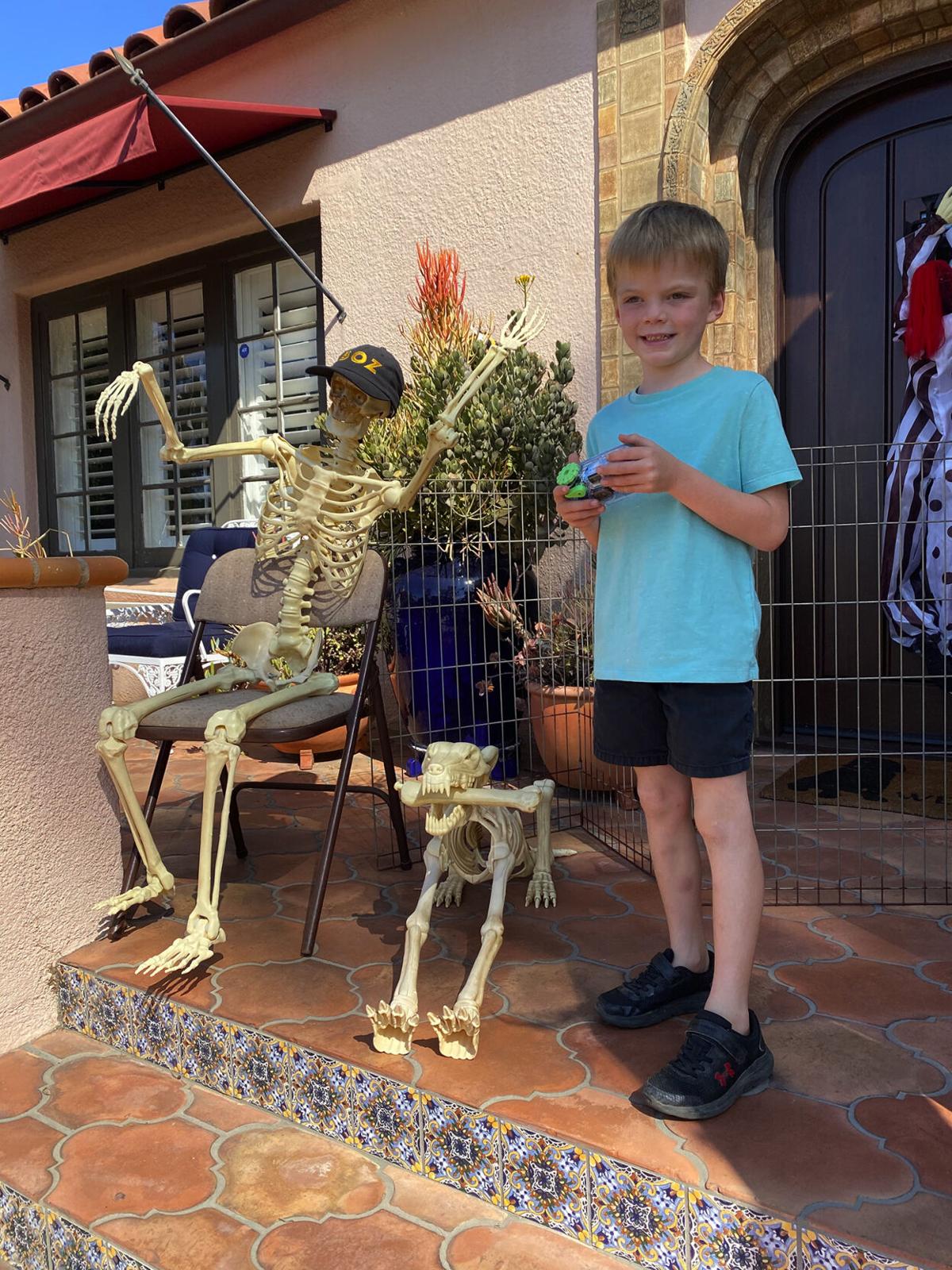 Andrew loves Halloween like most kids and enjoys the Halloween decorations in  the Mission Hills neighborhood in San Diego. 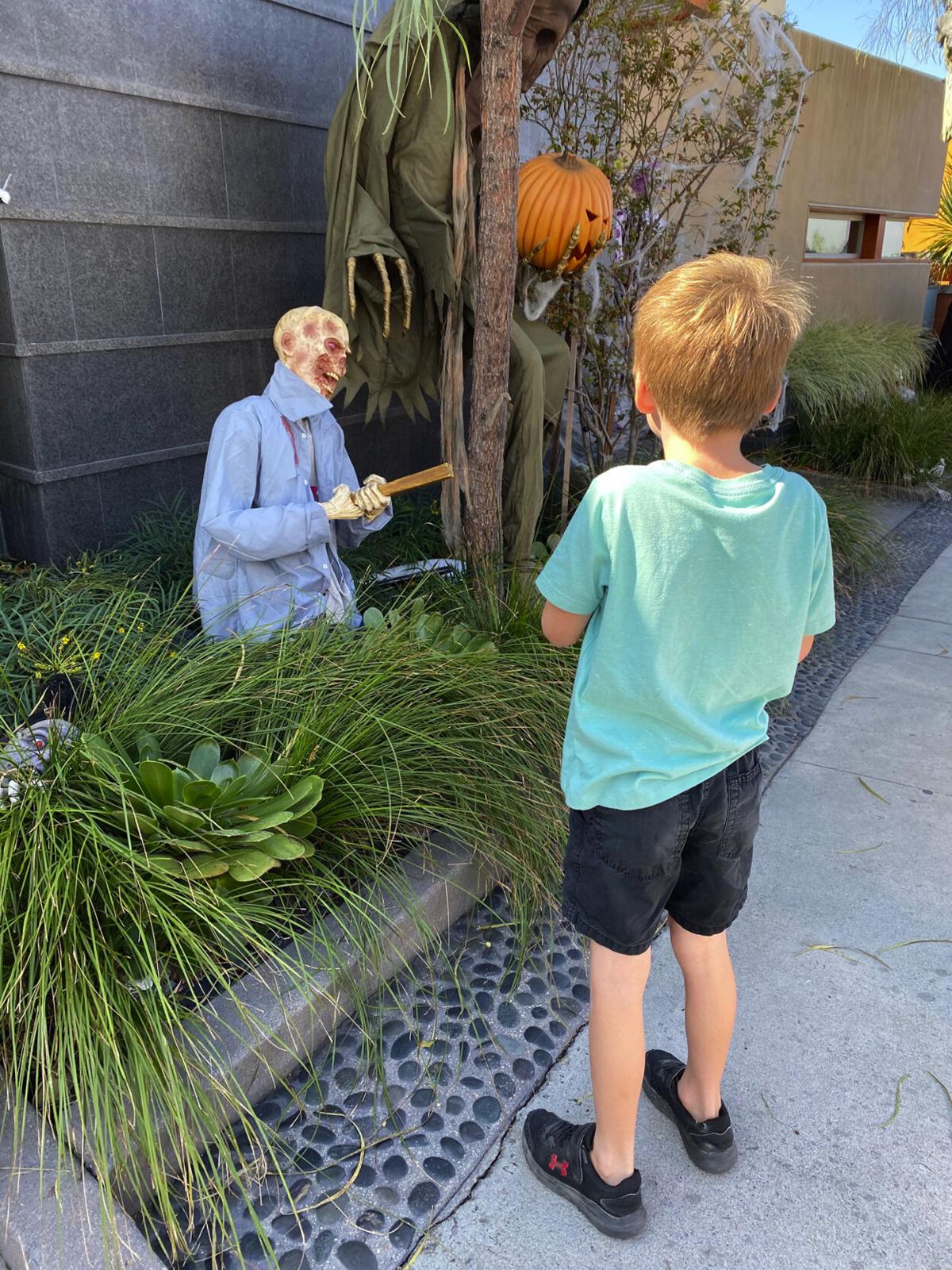 The scarier the better for Andrew when it comes to Halloween. 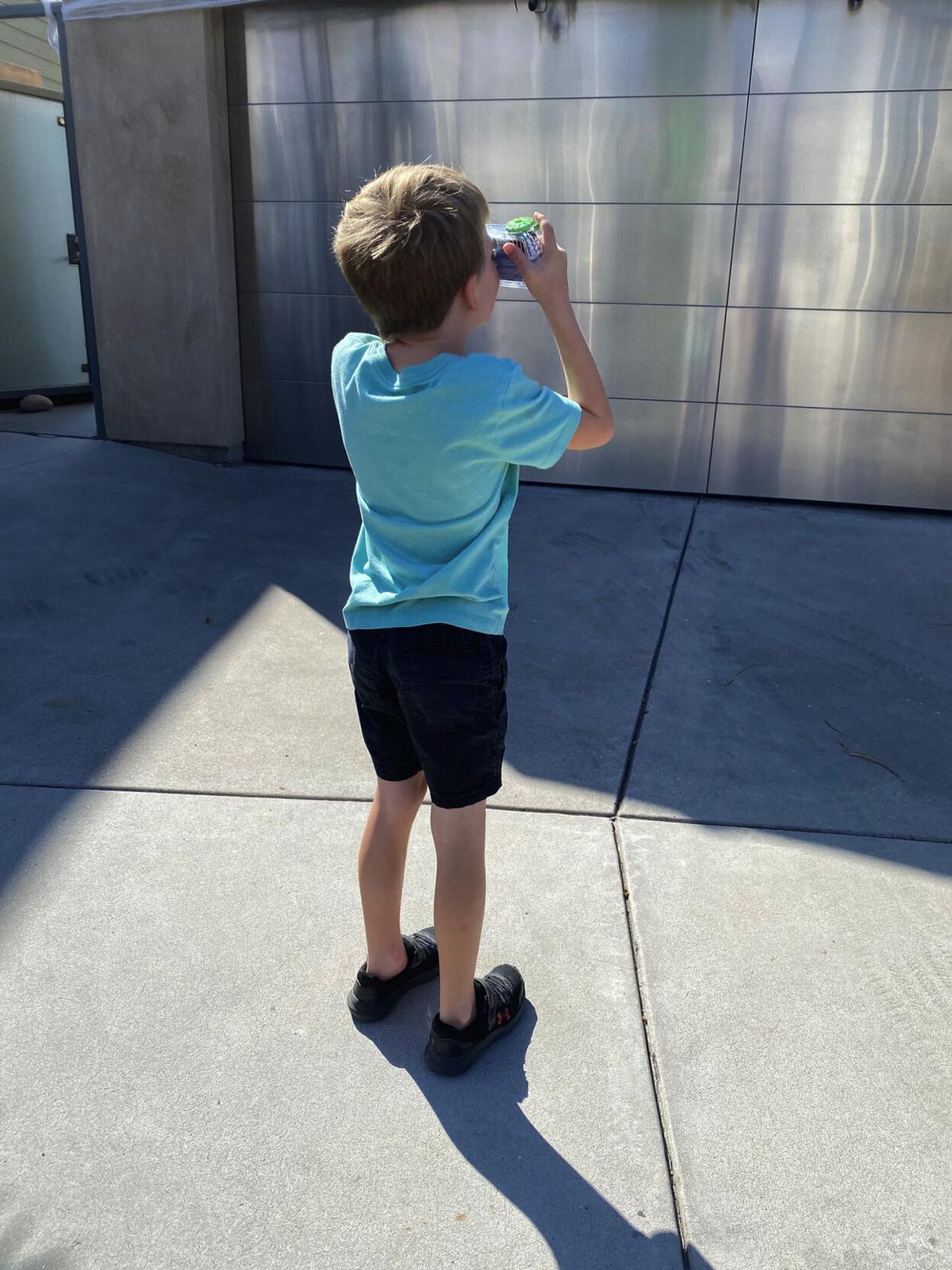 Andrew has a trusty disposable camera to capture some of the Halloween decorations in Mission Hills in San Diego. 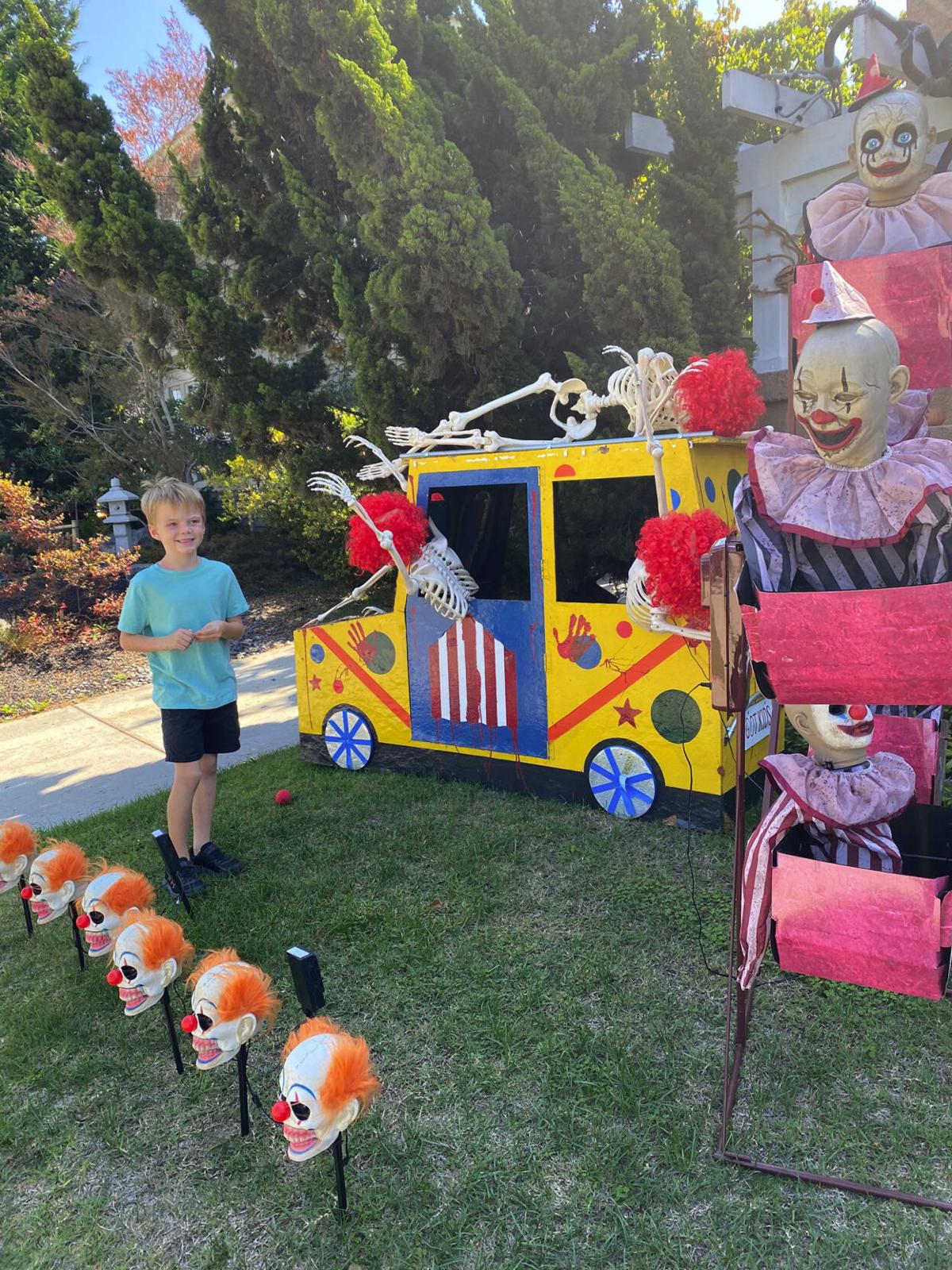 For a kid like Andrew, there is no better holiday than Halloween. 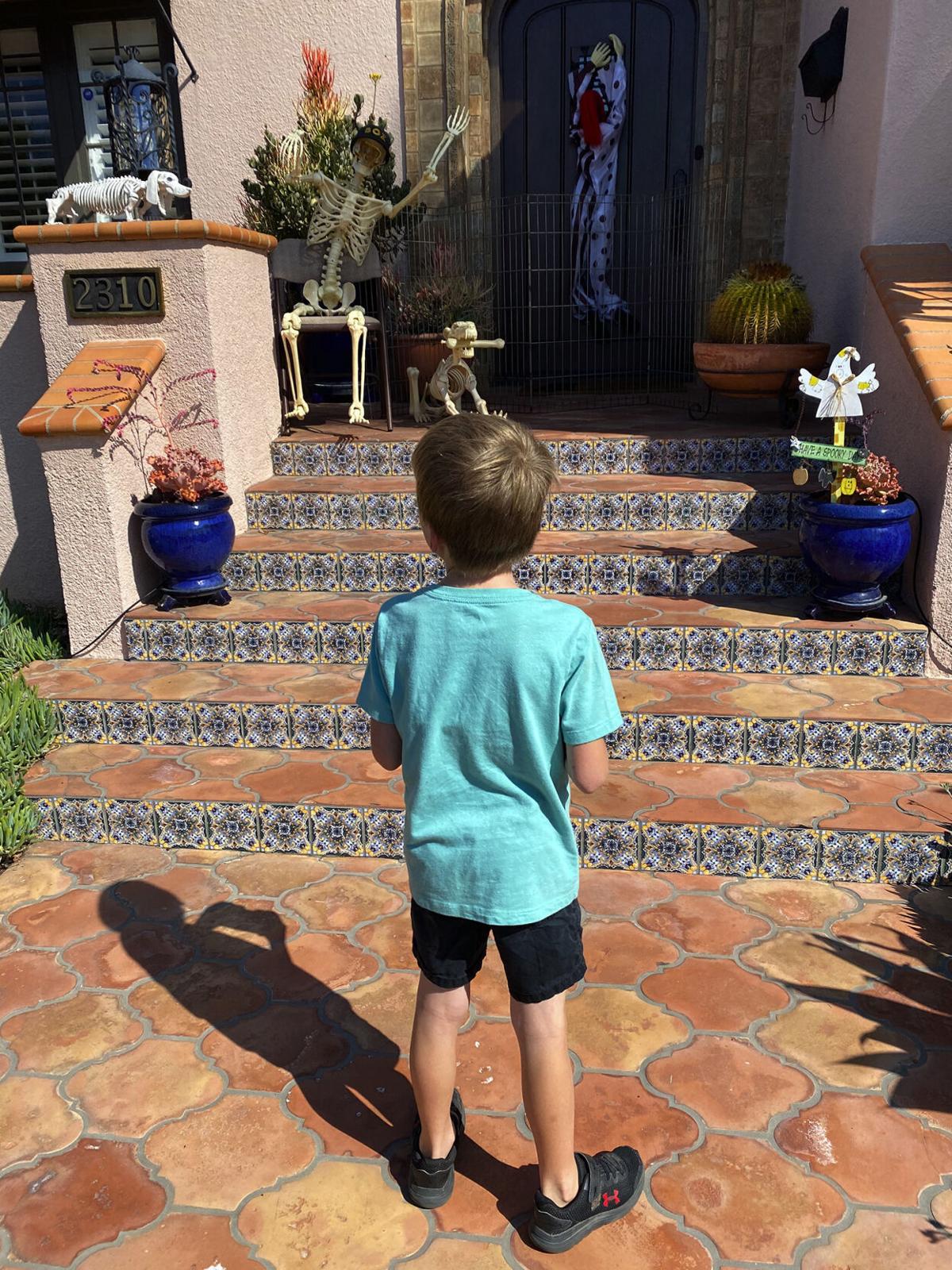 Andrew doesn't want to get too close. Who knows what will happen? 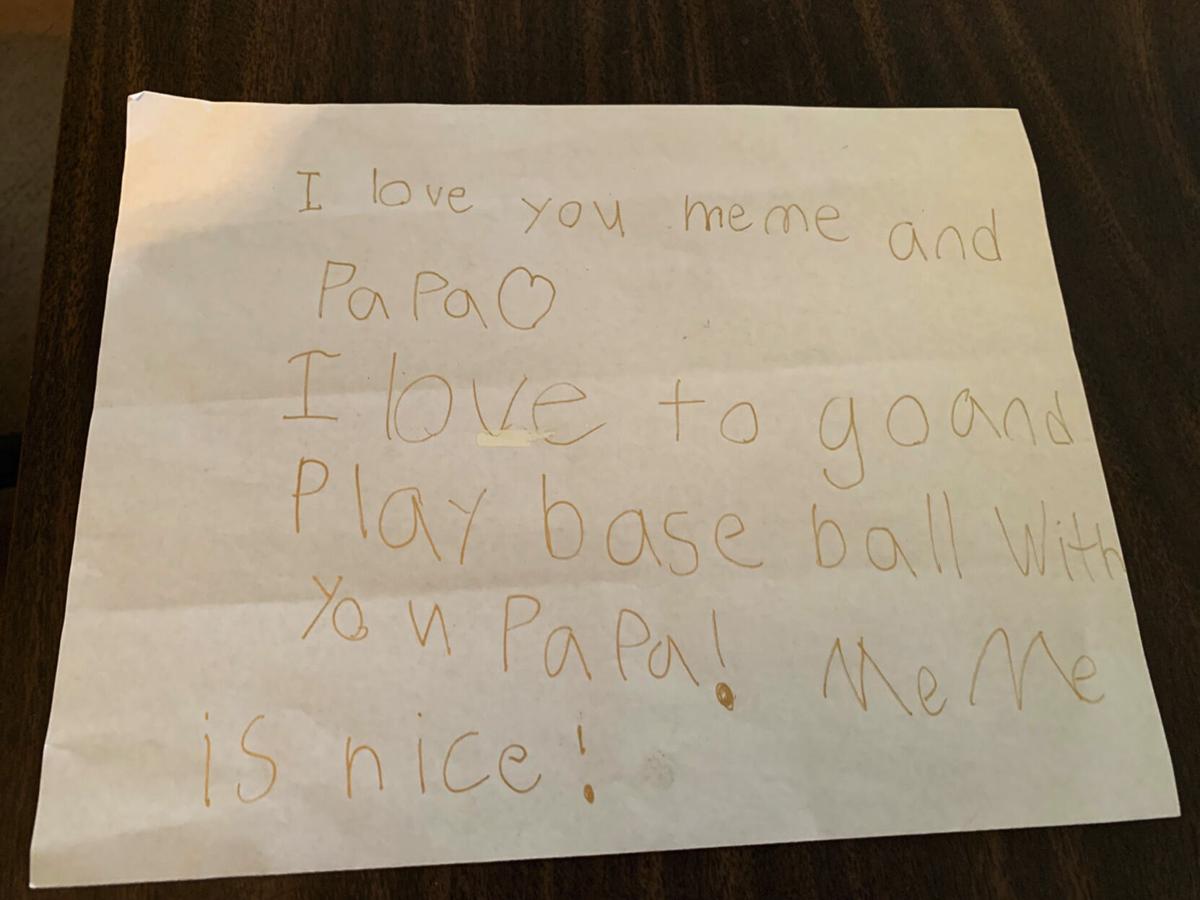 Andrew's note after a recent visit. You get one of these and you'll drive 600 miles to get another.

Andrew loves Halloween like most kids and enjoys the Halloween decorations in  the Mission Hills neighborhood in San Diego.

The scarier the better for Andrew when it comes to Halloween.

Andrew has a trusty disposable camera to capture some of the Halloween decorations in Mission Hills in San Diego.

For a kid like Andrew, there is no better holiday than Halloween.

Andrew doesn't want to get too close. Who knows what will happen?

Andrew's note after a recent visit. You get one of these and you'll drive 600 miles to get another.

You wonder when it's going to end. If not end, change. Move from this gravity-altering, earth-shaking, unconditional love to something more modest and measured.

I'm talking about grandchildren, immersing ourselves, which we did last weekend, in a visit with Andrew, 6, and 4-year-old Lillian. There is a hangover the day after from missing them, but we'll pay that price. Most people will.

A few days ago, I talked to a friend whose grandchildren are 10 and up and asked her: "Do they still love you like they did when they were younger?"

"Yes," she said after a pause.

I've heard that yes before and the pause, too. I know what she means. Things change but change is good, isn't it?

What hasn't changed is a child's love of Halloween. Sue brought an extra string of pumpkin lights that Andrew managed to talk his sister out of and that he strung in his room.

We visited our friends' neighborhood in Mission Hills because most of the houses were deep in Halloween decorations. Sue bought Andrew a disposable camera at CVS, so he could take photos of his favorite displays.

Although he appreciated "cute," "scary" decorations were better and "scary" ended up in most of the 27 photos. His preference for scary has made telling bedtime stories more challenging because unless I want to get into stray body parts ending up under the bed, I risk making up stories that fall in the cute category.

Other than having to rev up the scary meter, bedtime has not changed much. It is as comforting for us as it is for them. I'm not sure who likes it more.

For Andrew, the only thing that rivals Halloween is baseball.

When a small child falls in love with baseball, as Andrew has, he loves it with all his heart. Baseball occupies his waking hours, sleeping hours and all other available hours.

His interest started with his home team, the Padres, and especially Fernando Tatis Jr., San Diego's brilliant young shortstop who has captivated the city. Tatis plays with energy, joy and enthusiasm — who doesn't like that?

As much fun as watching is, playing is even better and enough is never enough.

He can't wait to get up in the morning, run to the brick driveway in his pajamas, where his parents have placed flat rubber bases, pick up his plastic bat and have somebody throw him a whiffle ball.

We played in the driveway and then moved the game to the schoolyard four blocks away. I was part of the visiting team — the Dodgers — and I took a licking. Thirty to nothing, 40 to nothing. When Andrew thought the narrative should shift, so as to not demoralize the visiting team, the Dodgers would be allowed a comeback but not an all-the-way-back comeback.

I was a Dodger, but I was a weak Dodger and in danger of being sent down to the minors.

You wouldn't think somebody would get tired just standing there and throwing pitches, occasionally bending to pick up the ball and walking the bases rather than running, but I did. I wondered about my fitness. Would it be against league rules to bring a chair and pitch, similar to what Lake Lovelace, founder of the Bakersfield Racquet Club, would do, hitting balls from a basket, later in his life?

I pitched mostly and he hit. The whiffle balls would end up in the eucalyptus trees, in the yucca plants, spiky palms and behind the trash cans.

During our visit, after a triple header for us and a tea party and a trip to Warick's, the old-fashioned bookstore in the village for Sue and Lillian, the kids were quiet. Dinner was in the oven and Lillian was coloring and Andrew writing, something he has learned how to do in the first grade this year.

When he was done, he showed Sue the sheet of white paper with the gold letters. It read:

"I love you MeMe and Papa (heart). I love to go and play baseball with you Papa! MeMe is nice."

Kids don't throw around the word love. When they use it and say it, they mean it. If you are lucky enough to be at the receiving end, it's better than fame, money and even homemade corned beef hash.

The countdown to the end starts at the beginning of the visit.

"You are going to be here for another day, aren't you?" Andrew asked, and so did Lillian.

"Yes, we are and we're going to spend every waking minute having fun, eating dinner, reading stories and playing baseball."

"Do we have an hour left?" Andrew asked during our last game in the driveway.

When the end comes, everybody falls apart. He cries, his sister gets inspired, she cries and we're not much help either.

"When are we going to see you again?"

Soon. Count on it. No pause yet.