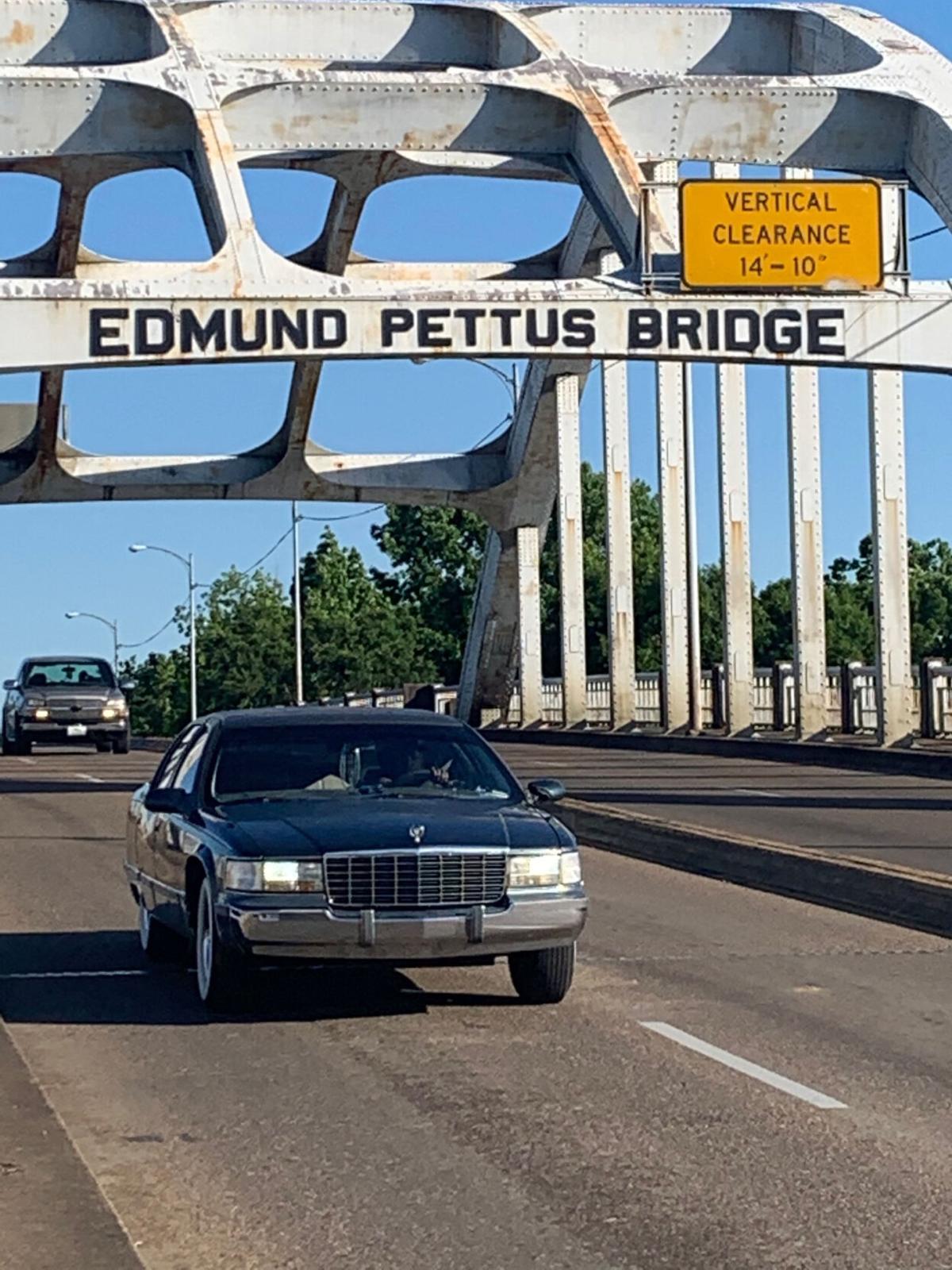 Cars drive over the Edmund Pettus Bridge in Selma, Ala. 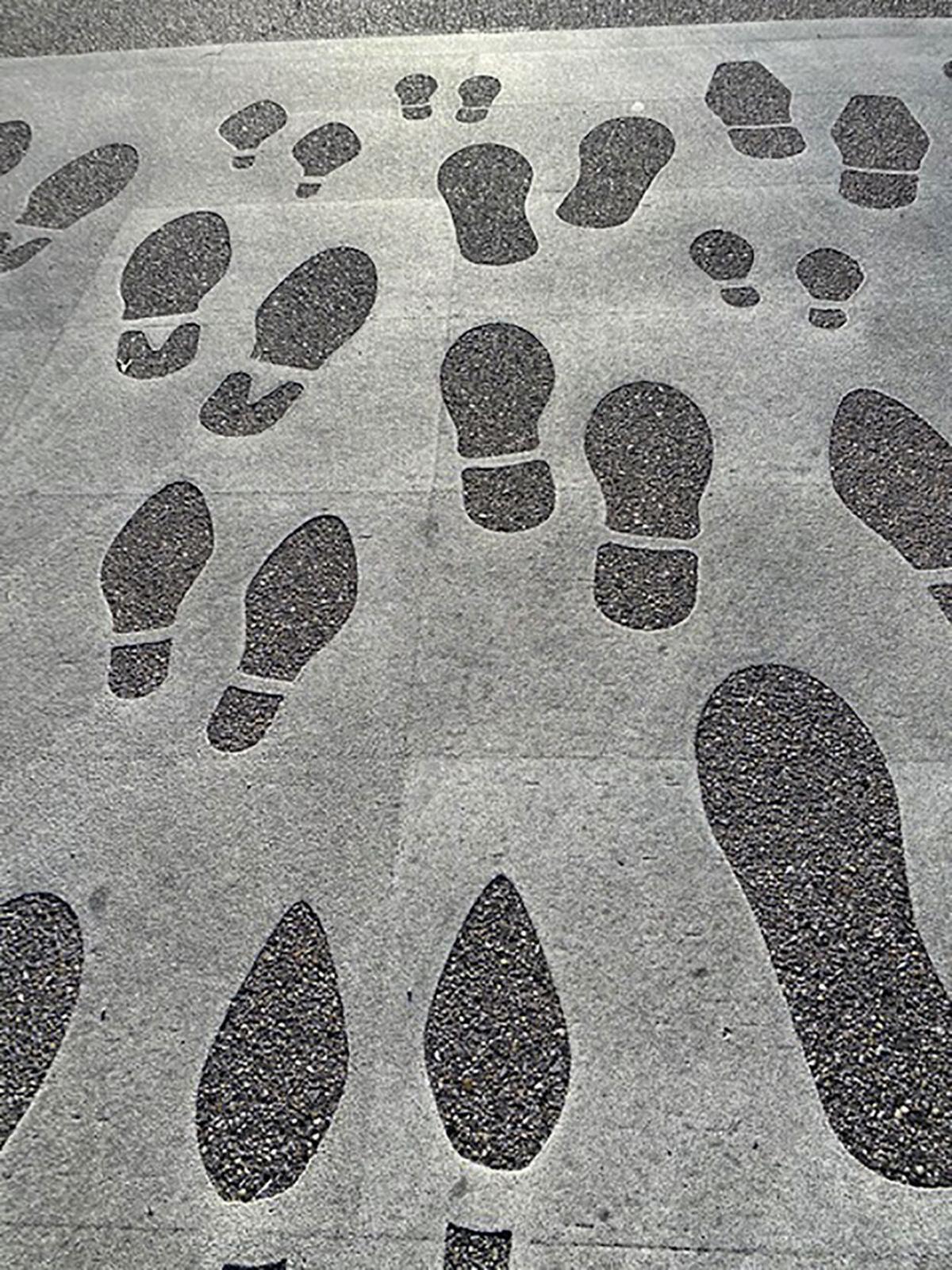 Footsteps leading to the state house in Montgomery, Ala., honoring the marchers who marched from Selma to Montgomery. 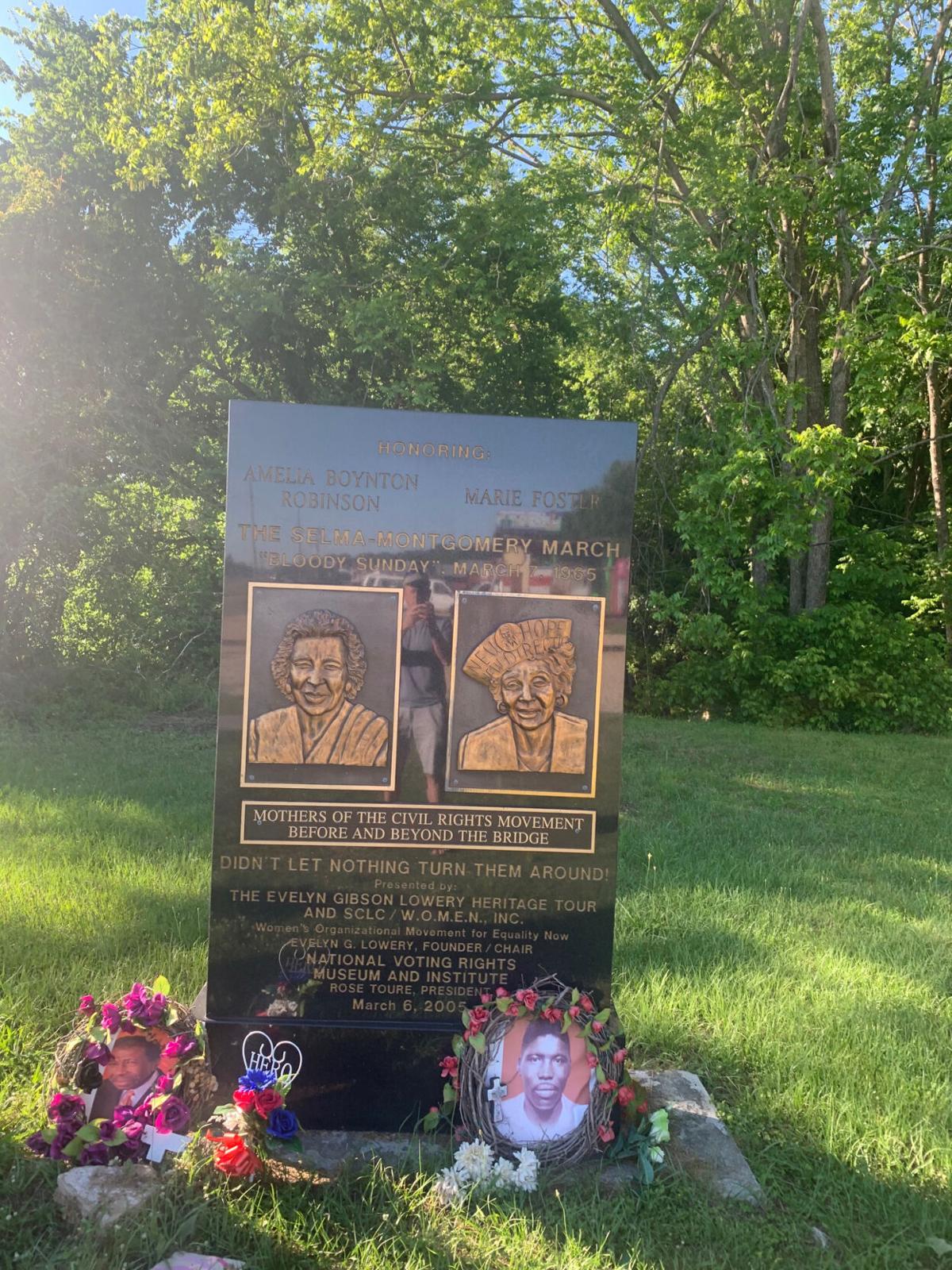 Memorial at the base of the Edmund Pettus Bridge in Selma, Ala. 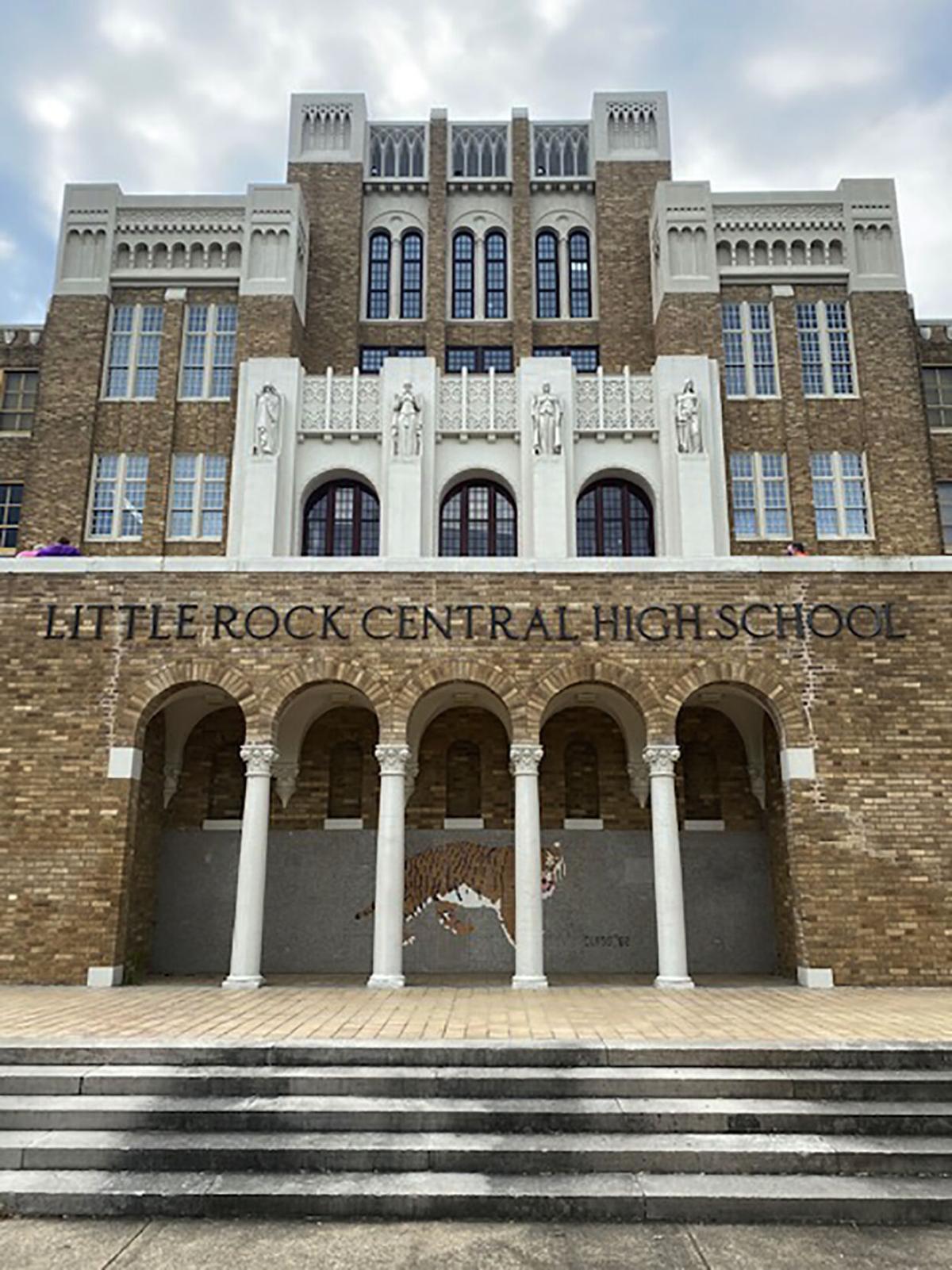 Alabama's Little Rock Central High School, where the Little Rock Nine made history in 1957 by enrolling in the formerly all-white school. 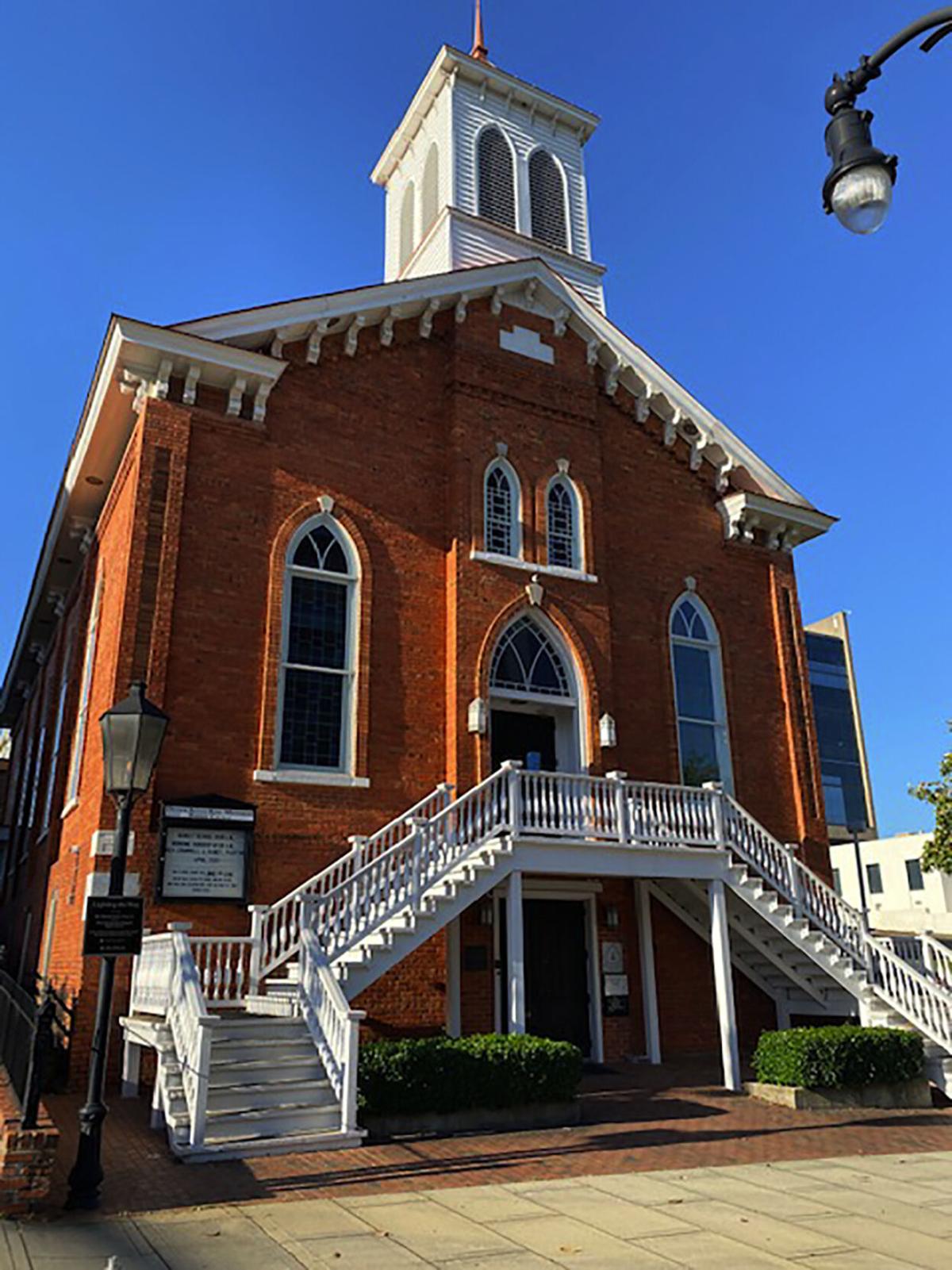 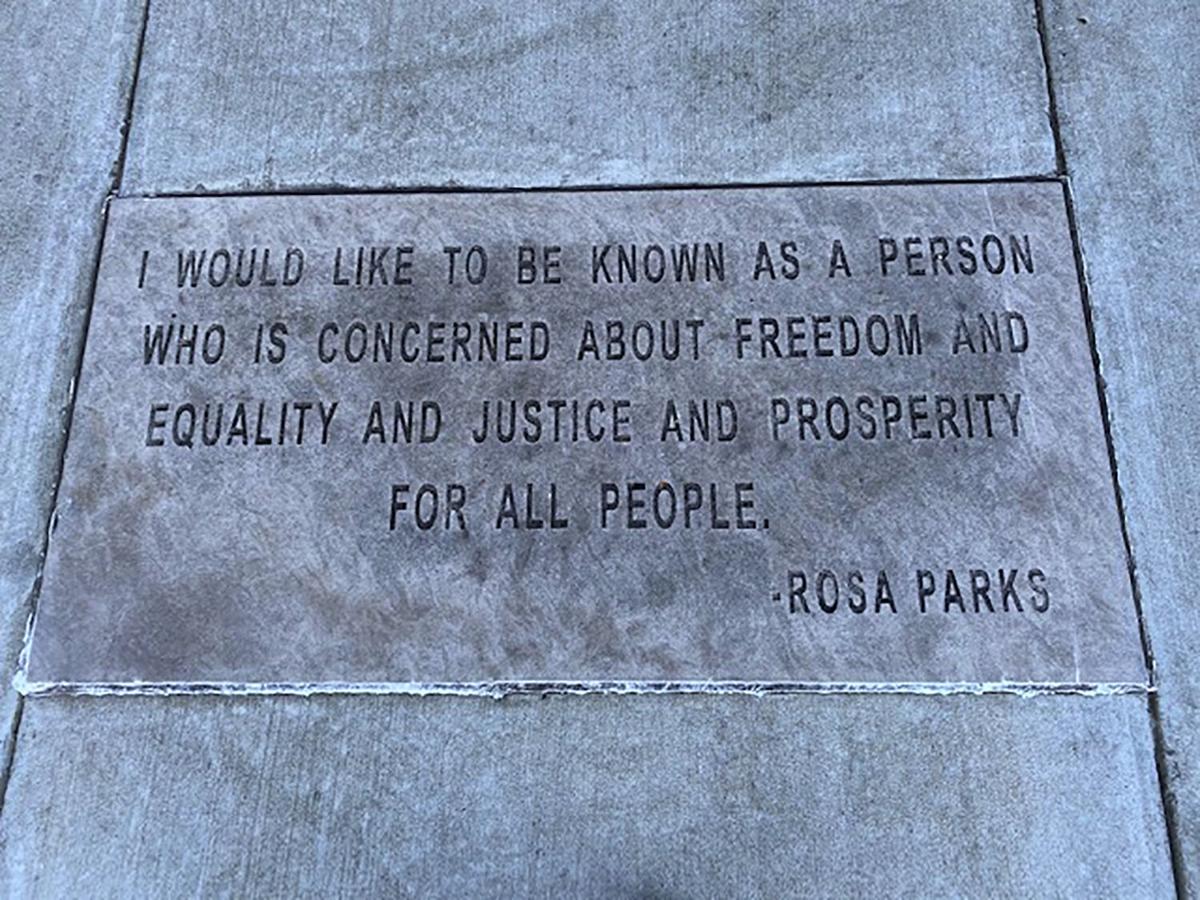 A memorial honoring Rosa Parks in Montgomery, Ala. 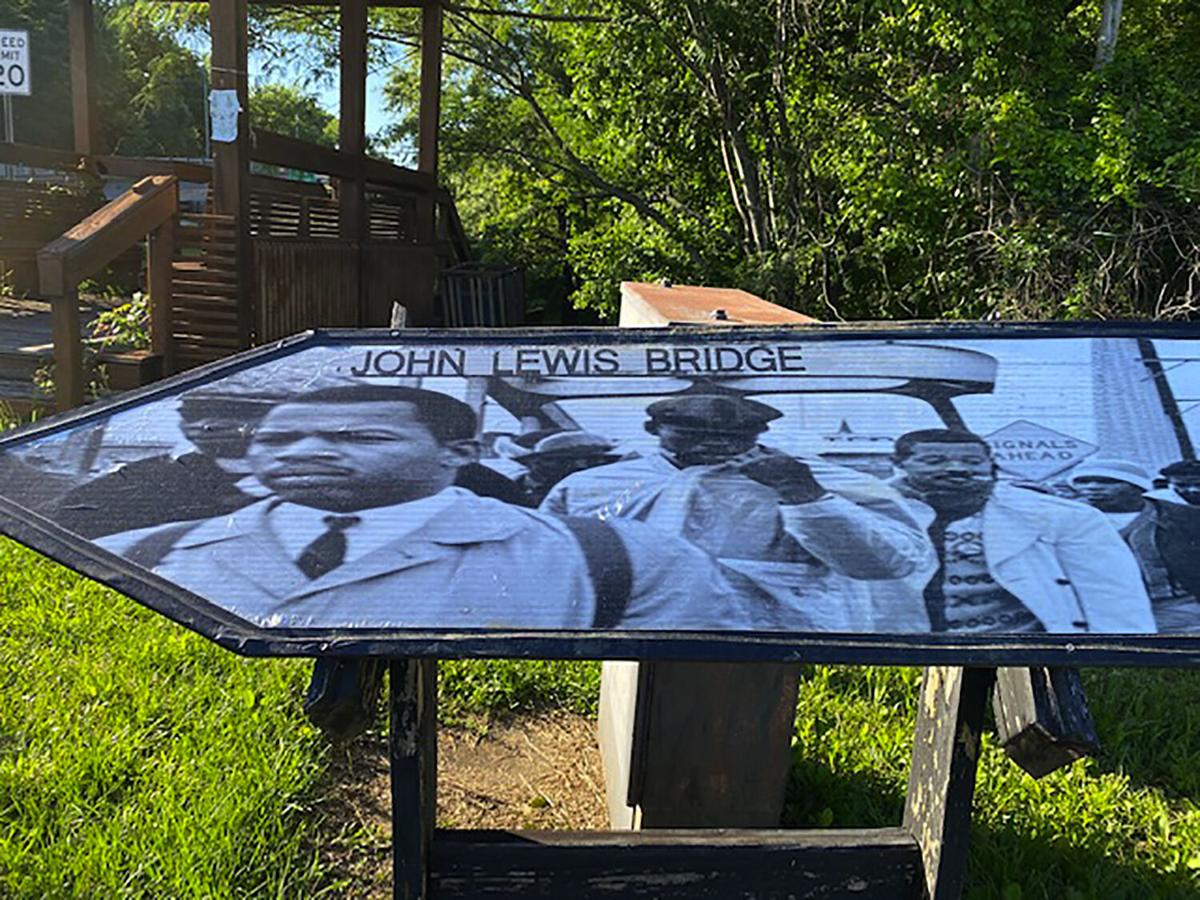 A memorial at the base of the Edmund Pettus Bridge in Selma, Ala., honoring the late John Lewis. 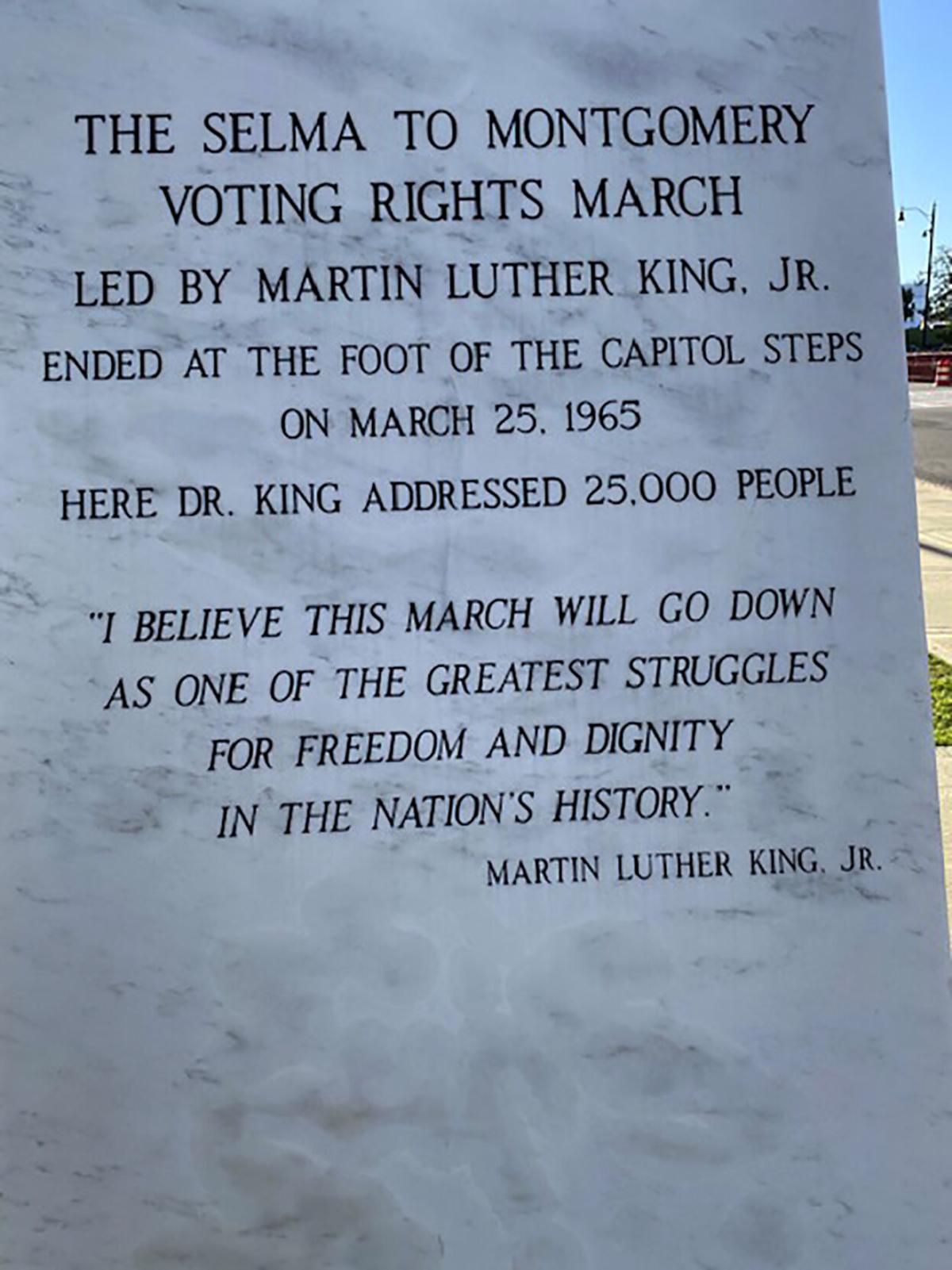 A memorial in Montgomery, Ala., honoring the Selma to Montgomery march that began on March 7, 1965. 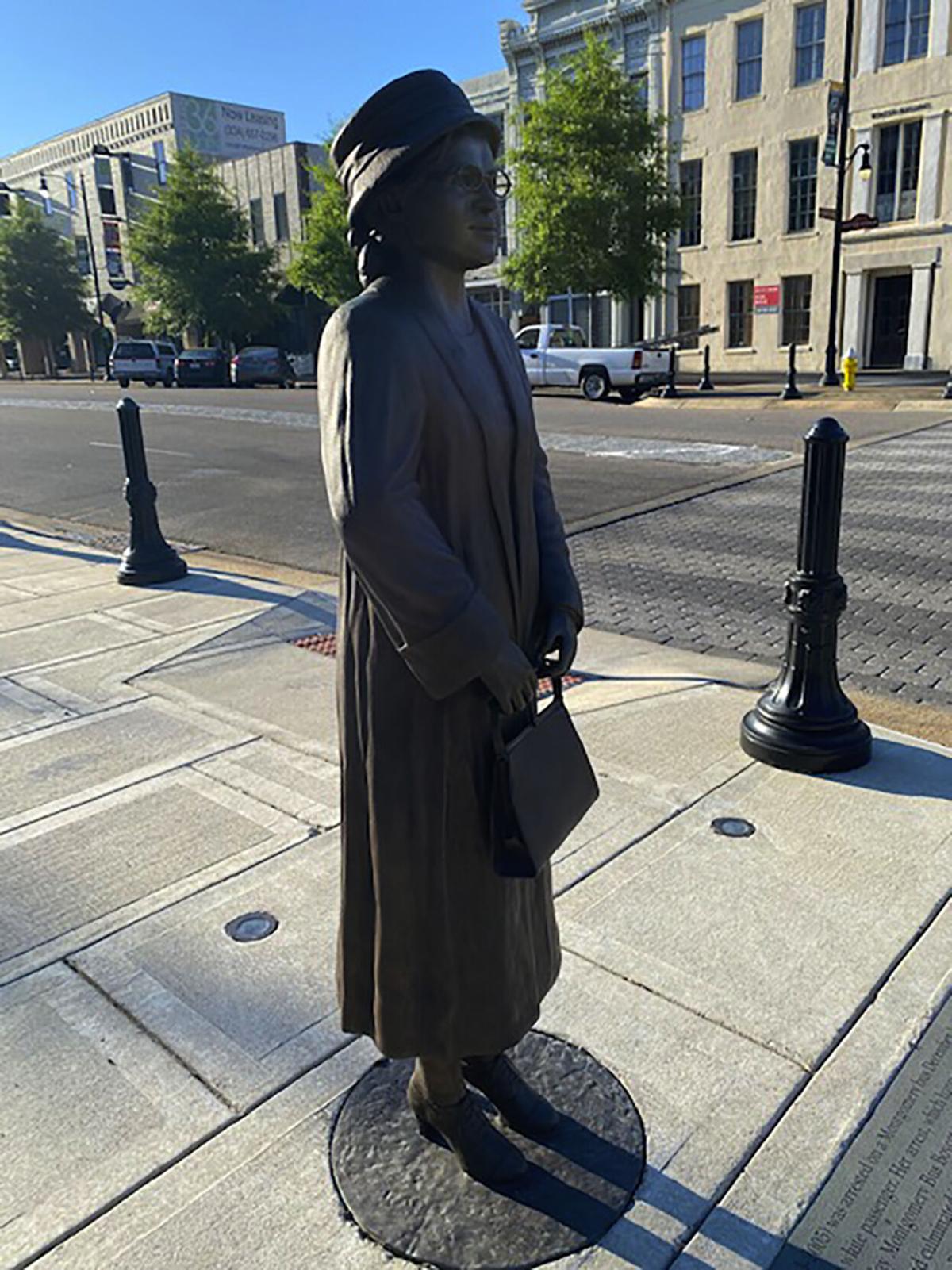 Activist Rosa Parks is remembered with a memorial in Montgomery, Ala. 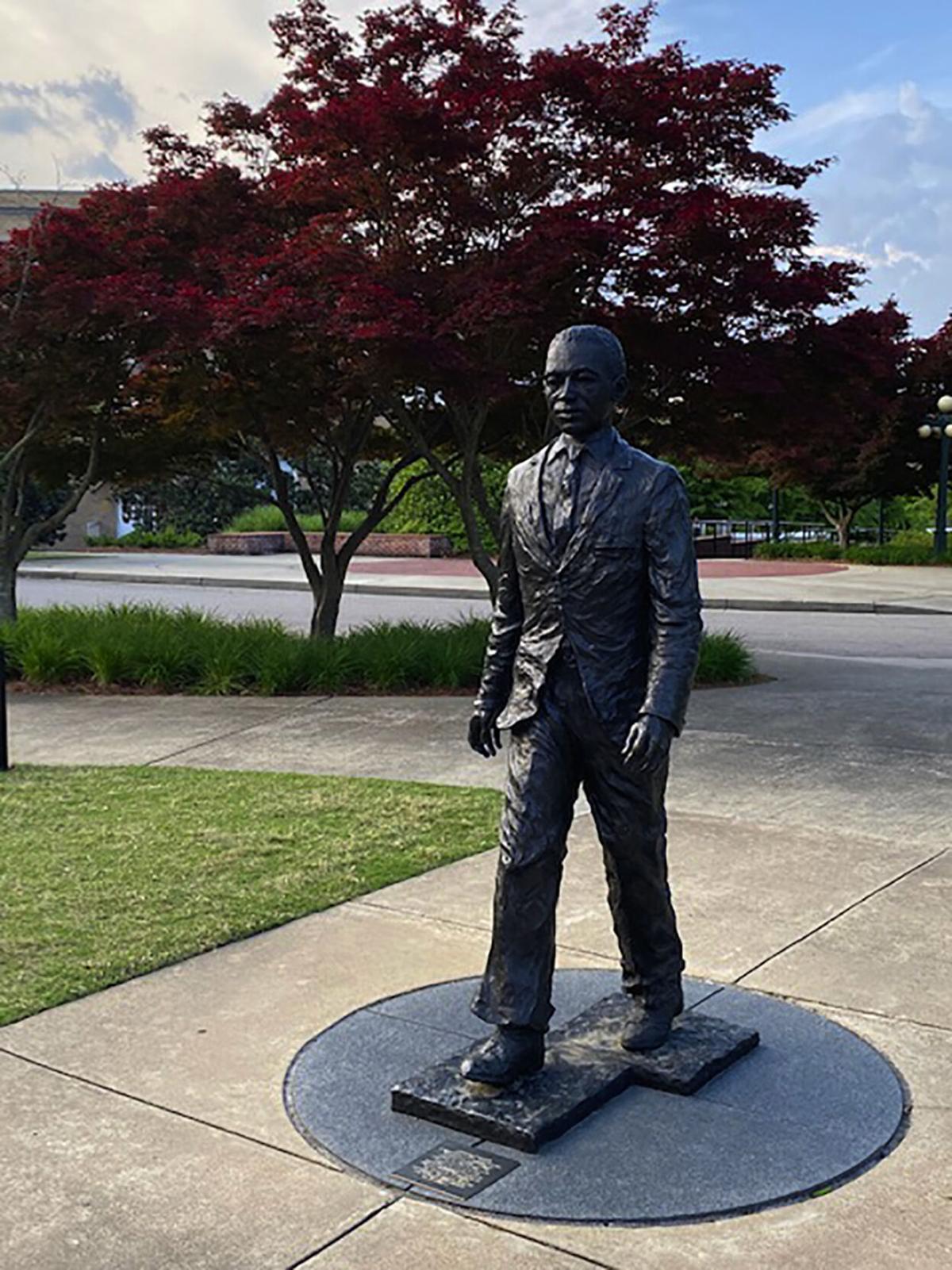 A statue of James Meredith stands at the University of Mississippi in Oxford where he was the first Black student to attend in 1962.

Cars drive over the Edmund Pettus Bridge in Selma, Ala.

Footsteps leading to the state house in Montgomery, Ala., honoring the marchers who marched from Selma to Montgomery.

Memorial at the base of the Edmund Pettus Bridge in Selma, Ala.

Alabama's Little Rock Central High School, where the Little Rock Nine made history in 1957 by enrolling in the formerly all-white school.

A memorial honoring Rosa Parks in Montgomery, Ala.

A memorial at the base of the Edmund Pettus Bridge in Selma, Ala., honoring the late John Lewis.

A memorial in Montgomery, Ala., honoring the Selma to Montgomery march that began on March 7, 1965.

Activist Rosa Parks is remembered with a memorial in Montgomery, Ala.

A statue of James Meredith stands at the University of Mississippi in Oxford where he was the first Black student to attend in 1962.

The original "moment" was March 7, 1965 — Bloody Sunday — when police attacked civil rights demonstrators with horses, billy clubs and tear gas on the Edmund Pettus Bridge as they attempted to march to Montgomery, the state capital. By the time they reached Montgomery — 50 miles and five days later— the marchers were 25,000 strong.

We parked at the base of the bridge in order to walk across the Alabama River into Selma. It was 5 p.m. and we were the only ones on the bridge. We hadn't overcome much unless you count raising four kids and skipping the last rest stop, so we were lightweights in every possible way but we came to pay our respects. That much we could do.

Books and newspaper stories are good, but there is nothing like seeing a place in person. It was humbling because it's one thing to walk across the bridge into Selma on a beautiful spring day with nobody there and another to be marching, walled in by haters who want to crush you and would rather push you off the bridge than let you cross it.

On the other side, downtown Selma seemed quiet, almost deserted and as if it had been deserted for a long time. We stood in front of an office housing the Selma Times Journal newspaper.

A middle-aged woman sitting in a brown car, saw us and asked if we were lost and if we needed help. I wasn't sure whether she meant literally or figuratively so the answer could have been "yes" to at least one of those.

Small world. Six degrees of separation world, a world in which history has long legs.

Her name was Rowena West. Her great-aunt, Emma Jackson, joined the march from Selma to Montgomery. Her grandfather M.C. Cleveland was a pastor at Day Street Missionary Baptist Church in Montgomery and one of 88 ministers later arrested at demonstrations. Cleveland knew and had welcomed Martin Luther King Jr. when King became the pastor at Dexter Avenue Baptist Church. When he was new to his post, King was a secretary to Cleveland during the district meetings. West said the churches in Montgomery were important for many reasons and especially after the Civil War.

"The churches helped the freed slaves make the transition from plantations to city life," West said. "They provided training for skills like being a domestic and even had a job placement program. My grandfather's church had the first Black Boy Scout troop."

When I kept asking about King and her family's connection to him, West was firm in saying that the civil rights movement was not only about the stars.

"It was made up of everyday people whose names you'll never know who put their lives and livelihoods on the line," West said.

We drove to Montgomery for the night and to see the Civil Rights Memorial designed by Maya Lin. The memorial features the names of 41 people inscribed around a granite fountain. Our hotel was six blocks from the memorial and on the way I tripped on the sidewalk and almost did a header. People walked 50 miles over five days and I couldn't do four blocks without almost ending up in traction. Clearly, these people were made of sturdier stock to say nothing of their courage.

A few days before Selma, we had visited the Little Rock Central High School and the National Historic Site Museum in Little Rock, Ark. On Sept. 4, 1957, nine Black students tried to enter Central High School. Several, including 15-year-old Elizabeth Eckford, were turned away by the Arkansas National Guard. When Eckford walked in front of the school campus, she faced a mob of students and protesters who jeered and taunted her.

Imagine being her parents or the parents of any of the nine children. It took three times over three weeks and President Eisenhower sending units of the U.S. Army's 101st Airborne Division to Little Rock to escort the students in the school who attended class guarded by soldiers. Those students were not allowed to join clubs or play sports. Ernest Green, who was the first of the Little Rock Nine to graduate, said, "It's been an interesting year. ... I've had a course in human relations firsthand."

Small world. A few days later, I met Ralph in the locker room of the Quapaw Baths & Spa in Hot Springs National Park. Ralph had attended Central High School and graduated 20 years ago. He works for the post office, supervising Amazon's Sunday deliveries. His experience had been positive so I guess that was progress.

After Little Rock was Oxford, Miss., and Ole Miss. The campus was empty when we visited, students having graduated two days before. We found the statue of James Meredith who in 1962 was the first Black student to attend the University of Mississippi. Meredith had served in the Air Force from 1951 through 1960 and after two years at Jackson State College, applied to Ole Miss.

Of his experience, he has said, "Nobody handpicked me ... I believed, and believe now, that I have a Divine Responsibility ... I am familiar with the probable difficulties involved in such a move as I am undertaking and I am fully prepared to pursue it all the way to a degree from the University of Mississippi."

Meredith didn't exactly face a welcome party. President Kennedy had to send 5,000 federal marshals to protect him. Riots followed and 160 marshals were wounded, 28 by gunshots, and two bystanders were killed on the Oxford campus. Meredith graduated in 1963.

In his life-size bronze statue, Meredith is wearing a suit and sports a light mustache. The base of the statue reads, "Courage, Knowledge, Opportunity, and Perseverance."

All of which Meredith would need because three years later, one day into his March Against Fear, he was sent to a hospital by a sniper's bullet. He lived and continued the march.

In Asheville, walking near downtown, we discovered Triangle Park, which was small and could have been easily missed. The park had colorful murals highlighting important people and moments in Asheville's Black history. One mural included a poem by Langston Hughes called "Mother to Son":

Life for me ain't been no crystal stair.

It's had tacks in it,

And boards torn up,

And places with no carpet on the floor—

But all the time

I'se been a climbin' on,

And sometimes going' in the dark,

Where there ain't been no light.

So boy, don't you turn back;

Don't you sit down on the steps,

'Cause you finds it's kinder hard;

And life for me ain't been no crystal stair.

Reading this in a book is one thing. Seeing it in person is another.

HERB BENHAM: Welcome to my home

We were on our way to Fancy Gap — yes, that's the name, you may or may not want to Google it — and we were lost having taken a detour.