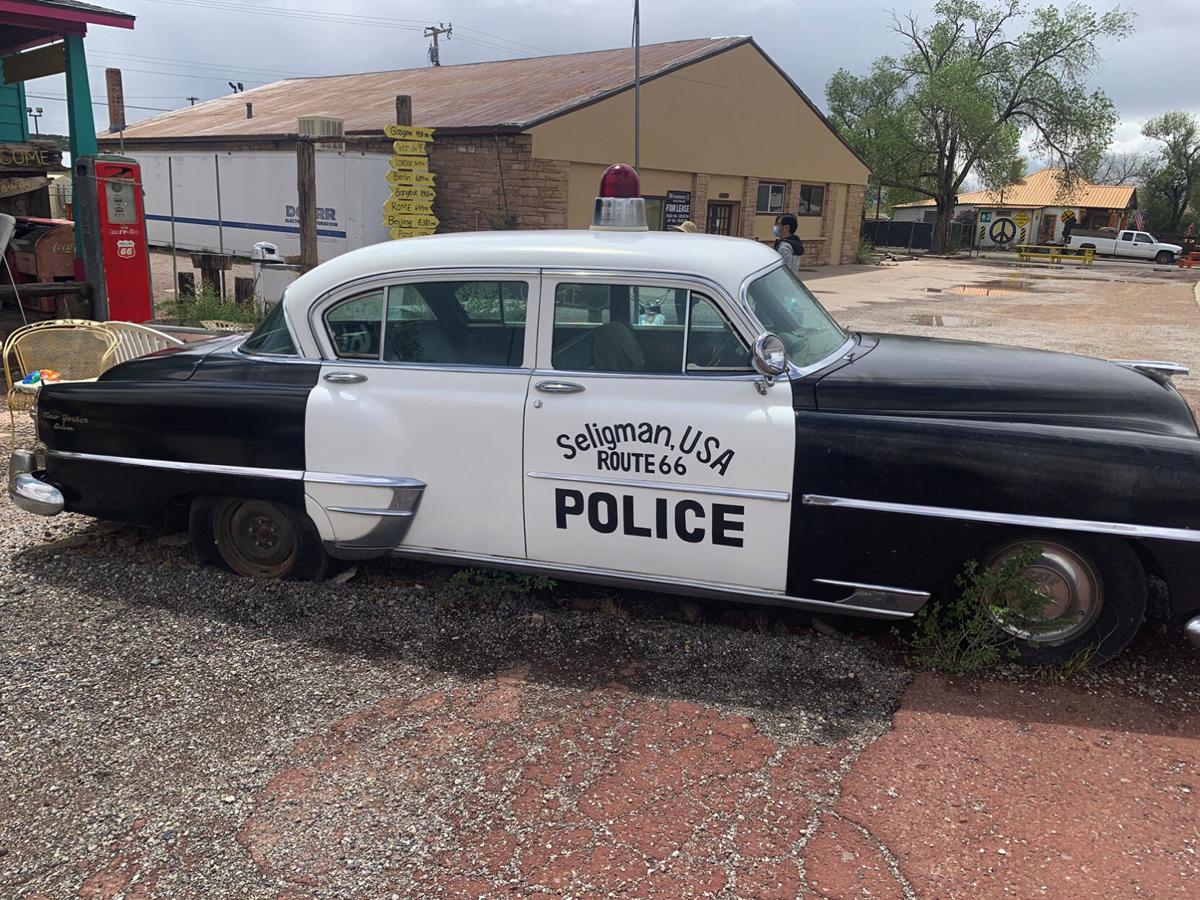 An old police car in Seligman, Ariz., is one of the many sights enjoyed in the first leg of the Benhams' road trip.

An old police car in Seligman, Ariz., is one of the many sights enjoyed in the first leg of the Benhams' road trip.

My beloved editor asked me a week ago what this column would be about. Although the car was packed, the itinerary printed, the car washed and full of gas, we hadn’t left town yet.

“Stef, I’m looking for America, but I have to leave town to find America," I said. "Bakersfield is America and may be more American than most of America but we’ll get back to that in a couple of weeks.”

Which brings up an interesting point: Traveling is the dance between meeting and getting met, seeing and being seen and finding and being found. In other words, when you hit the road as we are in this 6,600-mile cross country, coast-to-coast car trip during which I plan to dive into the Atlantic Ocean when we reach South Carolina, you have no idea who you’re going to meet and what’s going to happen. That can make it fun, rich and sometimes frightening.

Before starting the adventure, at least one home appliance, in our case the fridge, has to quit or show signs that it will fail during your absence and somebody has to cry, in this case, Nora, our 4-year-old granddaughter who loves her grandmother so much that she could only conceive her being away for 10 days because that’s as long a time as she can imagine.

We packed collapsible chairs, matching Smartwater bottles too, all Sue’s idea. Maybe we should have matching luggage too with matching light blue car slippers.

What a glorious first day on the road. Even Needles looked good, greener than I remember it and more picturesque than the name suggests. During the course of the 480-mile drive we had beautiful clouds, sunshine, rain, sleet and snow. The only thing we didn’t have was a rainbow and a choir of angels singing us safely across the desert.

We saw a National Carriers semi from Liberal, Kan. I didn’t think that was possible.

We plugged in the playlist. Every adventure needs one. Ours is 12 hours and 40 minutes long. The first song was “Love Reunited,” by The Desert Rose Band. We were driving through the Mojave Desert and the song appeared.

After an almost perfect car lunch of turkey avocado wraps and oatmeal raisin chocolate chip cookies, I started to get tired. We stopped in Seligman, a stop along Route 66, a quick detour from I-40. The first coffee shop was closed but we wandered into the Rusty Bolt, which sold ball caps, T-shirts, key chains, towels and sweatshirts, all emblazoned with Route 66. Inspired, we bought three caps, four license plates with Nora, Henry, Andrew and Lillian on them and one deck of cards.

We paid Corrine who was working the counter. Corrine is a former truck driver who has been to every state in the union except Alaska. She had two cute old English bulldogs at her feet who weren’t going anywhere. Corrine said business hadn’t been very good lately because 70 percent of their trade was foreign and people hadn’t been traveling. I told her it was about to improve. This is something that Traveling Herb knows.

We walked across the street to Route 66 RoadRunner for a mocha latte. They had the same array of Route 66 caps, T-shirts, license plates and playing cards. You mean, there are other places that sell this stuff? I probably could have loaded up at the Flying J Travel Center outside of Bakersfield.

When we arrived in Flagstaff, Ariz., our exit took us by the entrance to Northern Arizona University from which my goddaughter Sarah Baker had graduated. It seemed right because we’d found out a few minutes earlier that Sarah had been offered her first nursing job in San Luis.

We pulled into a Courtyard Marriott and I fetched one of those rolling carts. We were clearly not in car trip shape because when I rolled it to the front entrance, I was startled to see a reflection in the glass and thought, “Who’s that idiot bringing all that stuff in?” That idiot was me and I was loaded up like the Joads.

We ate dinner at Pato Thai Cuisine whose wall decor was a series of colorfully painted doors. Our waiter was a friendly young dark-haired man named Sripum Krathinthong, whose grandfather had fought in the Vietnam War. Soon he and his friends were starting their own road trip. Restaurants and the people in them — both patrons and guests — often can be shelter from the travel storm.

That night I got an email from Karen Sallee:

“Time has passed and our paths have not crossed. I read your article today about your upcoming trip and would like to suggest you take a detour to Roswell, N.M. Not for the usual, unexplained alien reasons, but for another different purpose.

“You mentioned you hope to visit national parks and civil rights sites. One such place exists a few miles outside of Roswell. Known as Blackdom, it was a town homesteaded by black citizens escaping oppression and the terror of the KKK. Many women homesteaded the land on their own.

"Best wishes and happy, safe travels, wherever they might lead you.”

We may not make it to Roswell, but Karen reminds me that there are a million stories out there. Ours are but a few.

Next up. After Santa Fe, we’re heading for Oklahoma but tornadoes are predicted. Do we make a midcourse itinerary correction or do we plunge on?

There are different ways of feeling small. Stand next to the world's tallest man at a circus. Lie on your back and look up at the Eiffel Tower…