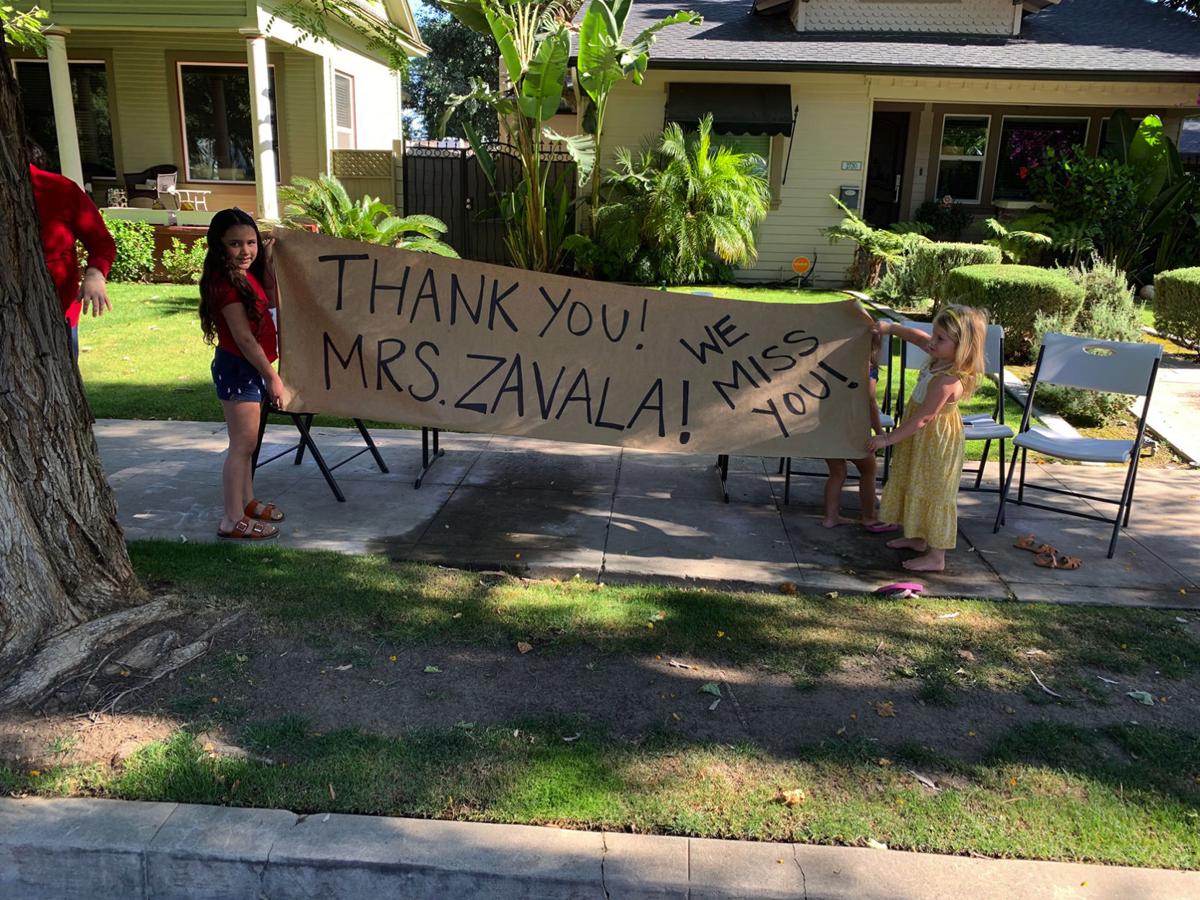 Ivy Cabral, left, holds up a sign for her teacher with help from Nora Benham for the Franklin Elementary School teachers parade on Tuesday. The parade didn't end up making it to this part of the route those in wait still had a fine time until the heat set in. 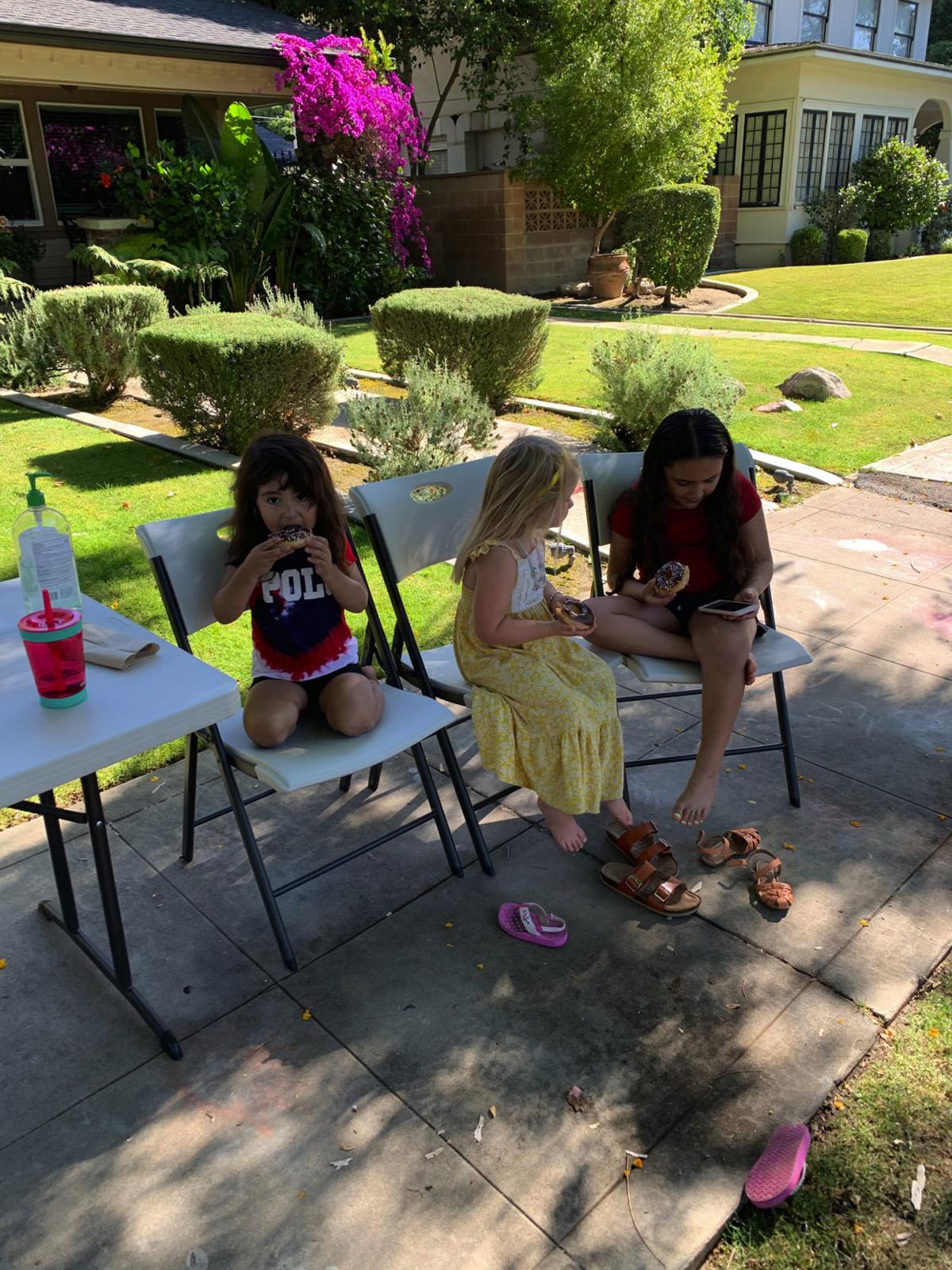 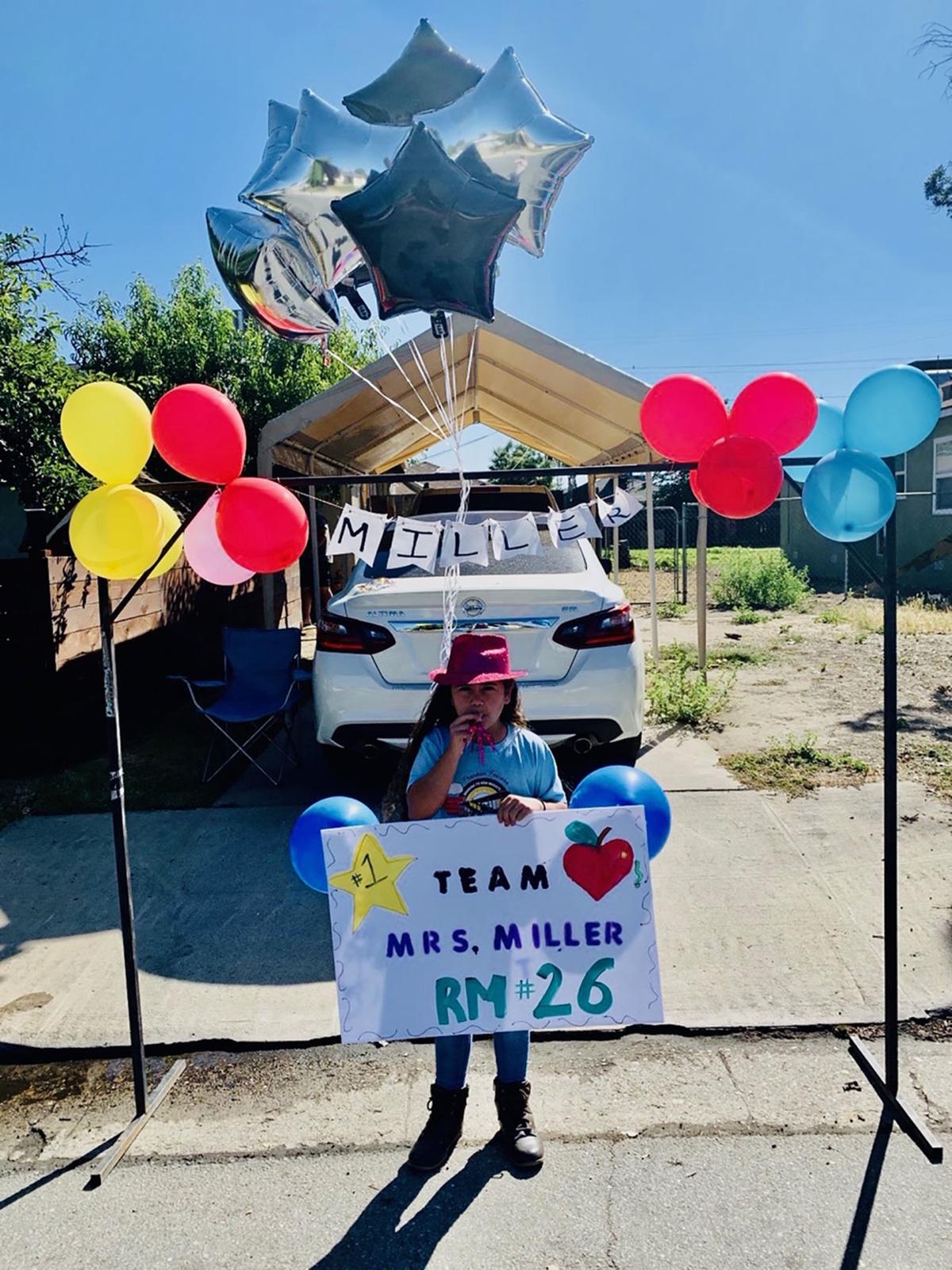 A student holds a sign in tribute to Brenda Miller, her second grade teacher, during the Franklin Elementary School teachers parade on Tuesday. 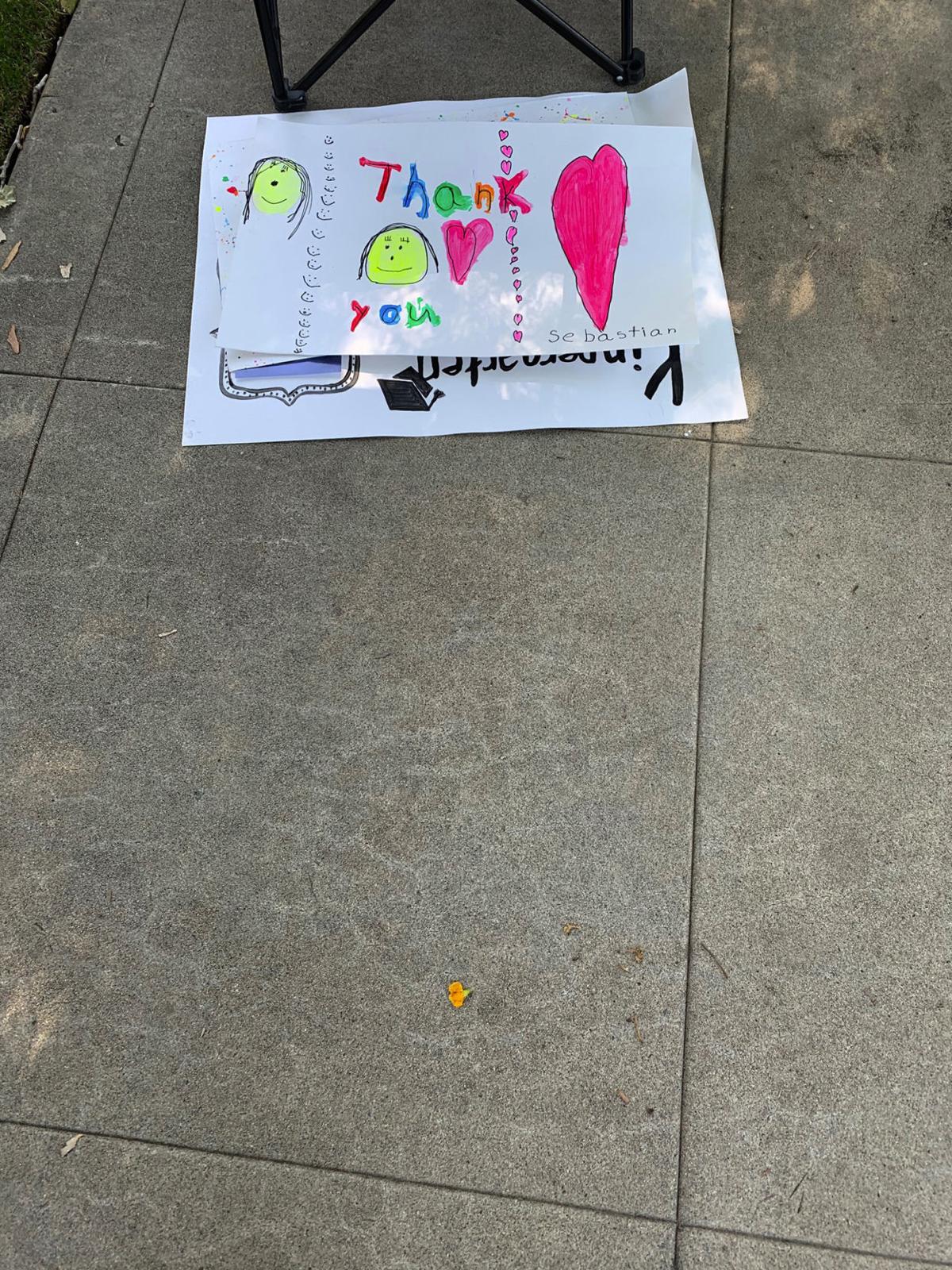 Student Sebastian Garza drew a picture in honor of his teacher for the Franklin Elementary School Teachers Parade on Tuesday.

Ivy Cabral, left, holds up a sign for her teacher with help from Nora Benham for the Franklin Elementary School teachers parade on Tuesday. The parade didn't end up making it to this part of the route those in wait still had a fine time until the heat set in.

A student holds a sign in tribute to Brenda Miller, her second grade teacher, during the Franklin Elementary School teachers parade on Tuesday.

Student Sebastian Garza drew a picture in honor of his teacher for the Franklin Elementary School Teachers Parade on Tuesday.

What better way to finish this, or any other school year than with a parade.

“Lauren has invited us to come down tomorrow morning to watch the end-of-year Franklin school parade,” Sue said.

“Lauren” is our daughter-in-law who lives seven houses down the street with our son Sam and their almost 4-year-old daughter, Nora, one of the most extraordinary, beloved and gifted grandchildren in the history of the species. “Tomorrow morning” was Tuesday and the “end-of-year Franklin school parade” was news to me.

Call me confused. Were children not out of school and had they not been so for 12 weeks? Did students plan to gather at Franklin and walk through the neighborhood 6 feet apart? It seemed a novel, but surprising idea.

Turns out the teachers had planned a parade, in their cars, and given the heat, probably with their windows rolled up tight and air conditioning blasting on high. The idea was to tour the neighborhoods that feed Franklin and say goodbye to their students who would line porches, sidewalks and front lawns.

Great idea. Neither teachers nor students had had a chance to exchange proper goodbyes in this topsy-turvy year. School was canceled because of you-know-what and now it was summer vacation, which normally heralds considerable joy but now felt anti-climactic.

Cancel everything but you can’t cancel the parade, the spirit behind the parade and the parade that would put a period at the end of a sentence that heretofore had had a question mark.

Tuesday morning shortly before 9 a.m., we walked down the street and parked ourselves in two wicker chairs, two and a half sidewalk squares from Lauren’s neighbors, Carmen and Omar Cabral and their three children, Diego, Ari and Ivy, their Franklin kindergartner.

“She’s been pretty good, but last week she had sort of a meltdown,” Carmen said. She said, “Why can’t I just do my homework at school with my friends?”

Why? Because your brother just pulled up with a box of doughnuts from Krispy Kreme to start this party. Why? Because there is a parade on the way and your teacher is going to drive by, wave, tear up, and make you feel wanted, loved and appreciated all over again. Why? Because who doesn’t love a parade especially if you have a chair, a doughnut and chalk pictures on the sidewalk.

That’s why and why we are lining the parade route waiting for everything to be made right again.

Were those horns? I think they were. The parade must be close. Soon we’ll see a line of cars with balloons trailing behind them and fogged-up windows.

Turns out the horns were just a couple of drivers who were mad at each other or mad at the universe in general. “Mad” reminded me of “Why Me Lord,” the song by Kris Kristofferson. Why — why not?

“I think we may be at the end of the route,” Carmen said a few minutes later, having checked her phone and a school app that detailed it.

That’s OK, as long as we have cold water, which Lauren graciously provided and shade courtesy of the giant sycamores under which we were sitting. We had time.

“Time” for conversation and time to get bitten by the mosquitos that seemed unusually hungry at this end of the block. If the parade didn’t come soon, some of us were going to need pants, long sleeves or a visit to Houchin for blood replacement therapy.

“Did they get lost?” somebody asked.

“Somebody” asked and nobody knew and by 10:45, it was getting hot and some of the parade enthusiasts were beginning to lose their enthusiasm, their faith and their mojo.

“Can we turn on the sprinklers?” asked Nora and she did, soaking the adults, too.

“The teachers went off their route and got lost,” Carmen said. “I don’t think they are going to come by.”

I texted Brenda Miller, who has taught second grade at Franklin forever and asked her how the parade went.

“It was bittersweet! At one point I could feel tears, as I saw sweet faces that I miss so much. It was fun though.”

Great idea, whether you were on the route, off the route or on the route initially and then off. In a way, it was a fitting end to a school year in which students had to use their imaginations more than usual. They had to believe. They had to think that even school might be better than staying home with their parents all the time.

Goodbye, teachers. Thank you, teachers. See you next year, teachers, when surely the parade of learning will begin again.