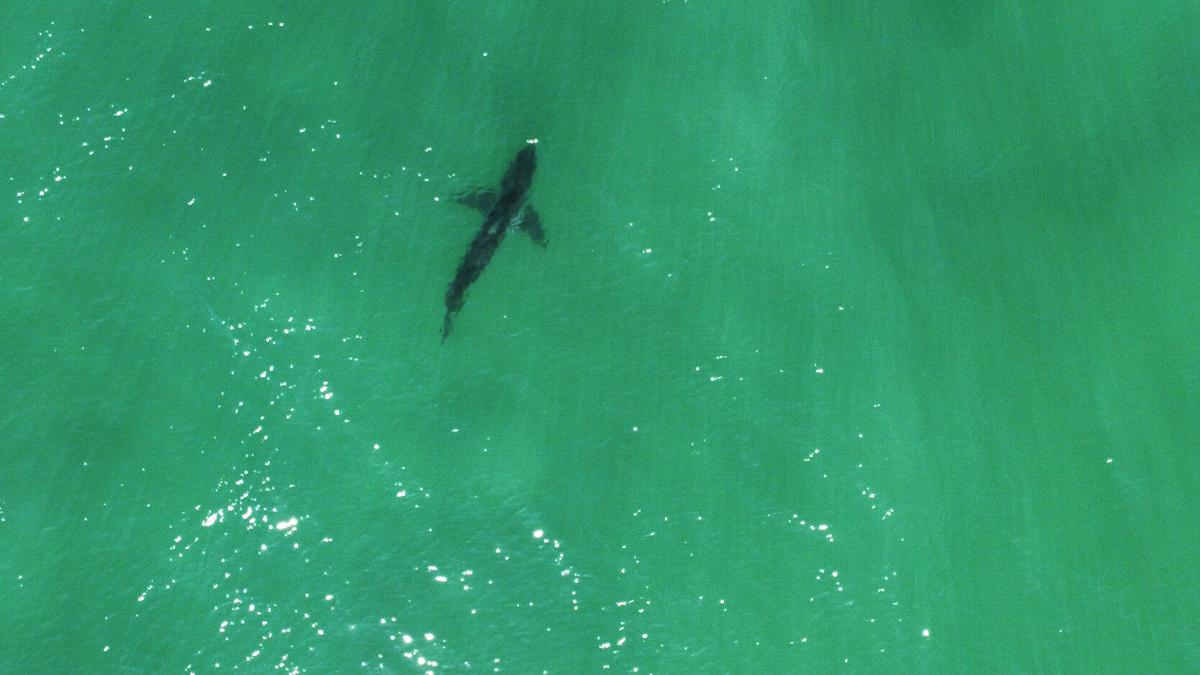 Drone shot of a great white shark in San Diego. Where there is one that you see, there are 100 that you don't. 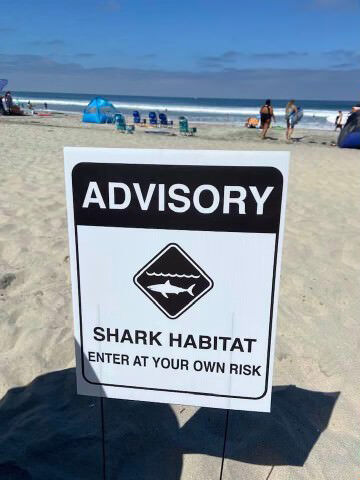 A sign in Del Mar warns swimmers and surfers that they'll be entering the sharks' turf. 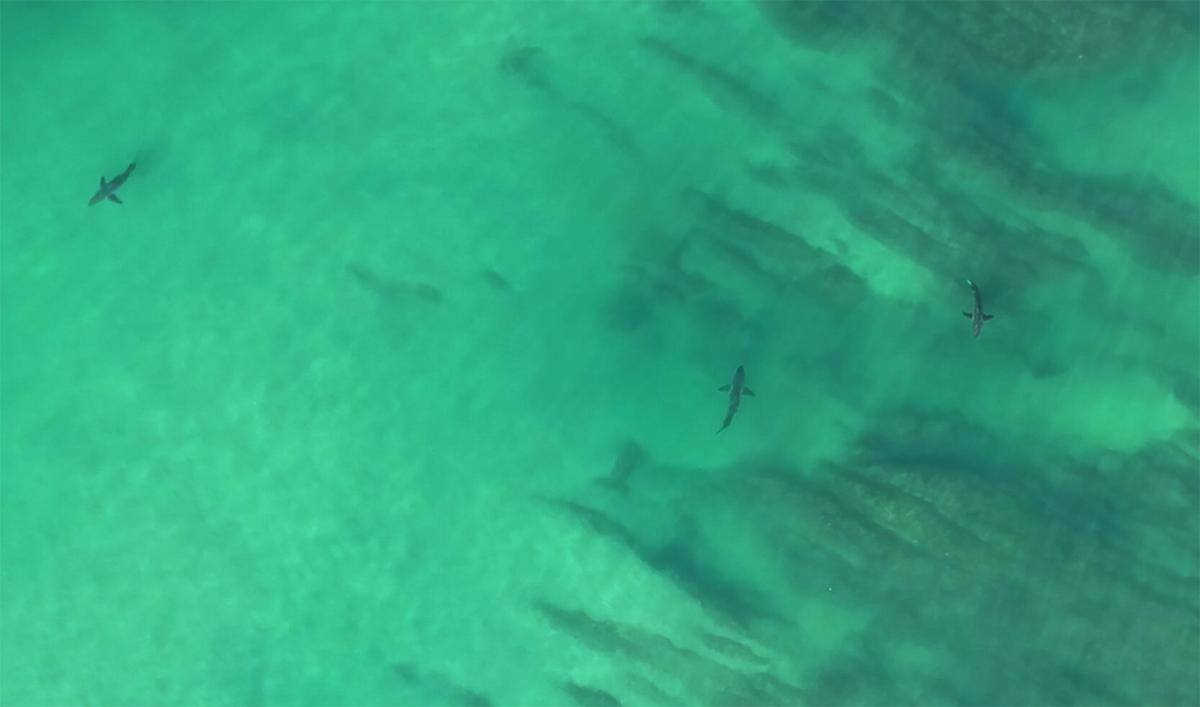 A drone shot captures a few great white sharks in motion in the waters near San Diego. Up close, they are way bigger. 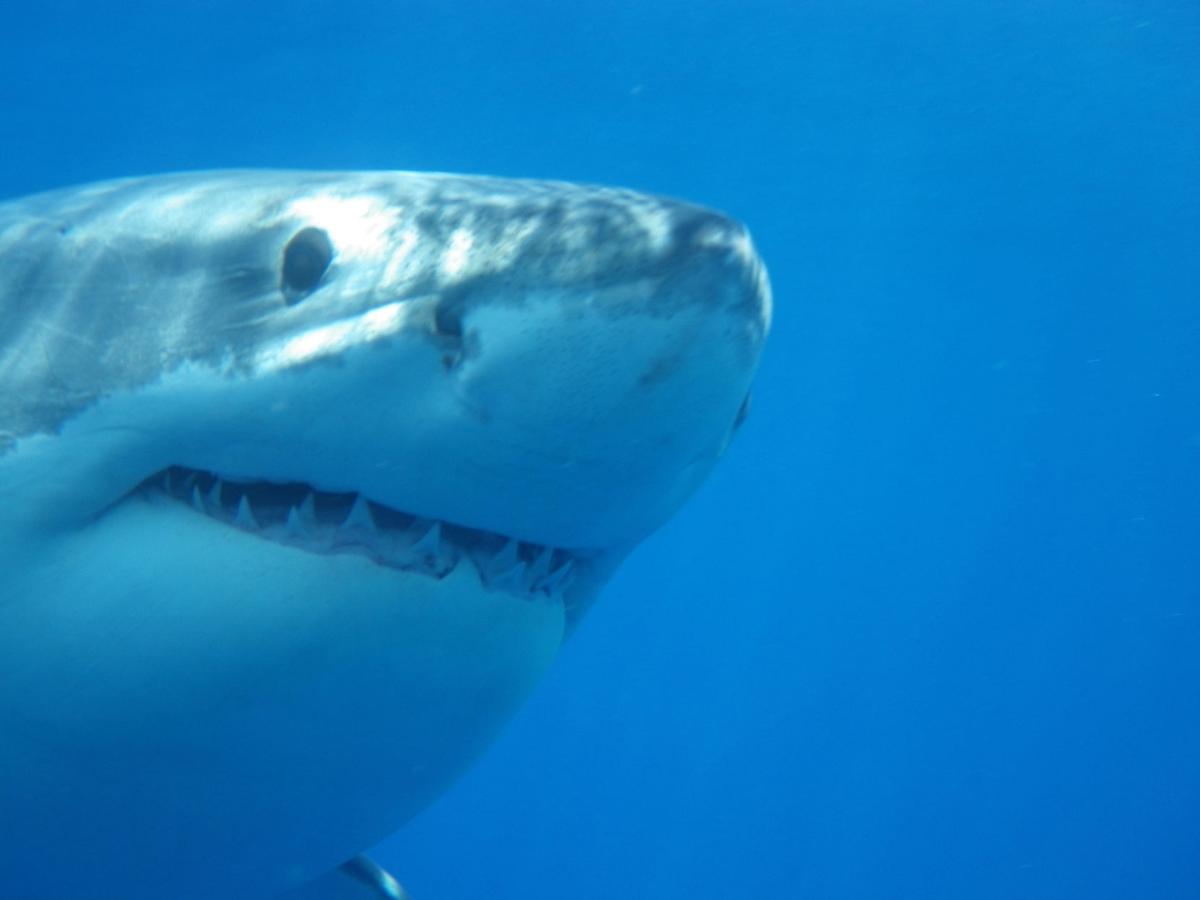 This great white shark was spotted at the Greater Farallones National Marine Sanctuary, but if you see one in the wild, head for the shore.

Drone shot of a great white shark in San Diego. Where there is one that you see, there are 100 that you don't.

A sign in Del Mar warns swimmers and surfers that they'll be entering the sharks' turf.

A drone shot captures a few great white sharks in motion in the waters near San Diego. Up close, they are way bigger.

This great white shark was spotted at the Greater Farallones National Marine Sanctuary, but if you see one in the wild, head for the shore.

I saw two great white sharks in four days. In person. Ten feet away and 5 feet deep, under my red stand-up paddleboard. The first was around 7 feet long and the second 5.

I'd like to think red scares them away. That it's similar to a stop sign that reads,"Halt. Go no farther. This has been designated as a no-shark zone."

That strategy is at best, wishful. Aspirational. Sharks are colorblind. In people, it's a great quality; in sharks, I'm not sure what it means.

After the noneventful brush with the first two, I saw a third breach about 300 yards out in the ocean. I'm calling it a great white because dolphins often leap from the water in a "I'm playing around and I'm just happy to be alive" motion.

Great whites launch when they breach, as if they are trying to swallow the sun or at least put it on notice that its days are numbered.

We were in San Diego, Del Mar specifically, which has become one of the hotbeds for great whites. These fish, and they seem more than fish, are so impressive it almost feels as if the name should be capitalized: "Oh, my God. I just saw a GREAT WHITE."

"I've been surfing for 50 years," said Steve Moreland, a retired physician. "I'd never seen a great white before and in the last 18 months, I've seen 100."

Then, in an effort to make the less courageous feel even punier, he said, "Those are just the ones you see. There are hundreds more that you don't."

The numbers make sense. Great whites have been protected in California since 1994. They are free to breed, roam and scare the daylights out of watergoers, and they seem to be doing that nicely.

The question might be, "Why would anybody go in the water between Santa Barbara and Imperial Beach? What are you people thinking? Are you out of your mind?"

Honest questions, good questions, but questions that ignore a relationship many of us (not everybody) have with the ocean.

We are drawn to the ocean, we came from the ocean and we find every reason to return to the ocean. I've scattered some of Dad's ashes in the sea and I would like some of mine to be spread there, too. I would prefer this happens after I have died of natural causes rather than because of an unplanned encounter with a you-know-what.

An "encounter" whose odds are low.

There have only been nine fatal shark attacks in the history of California (not including the heart attacks when people saw a shark and thought they were shark toast) with the most recent one in 2008 in Solana Beach when a 66-year-old swimmer (alarmingly close to my age) was killed.

However shark attacks occupy such a revered place in our nightmare-leaning imaginations that one fatality is magnified and it seems like half of Huntington Beach is wiped out when one happens, fatal or not.

If you can't stay away from the ocean, it helps to tell yourself stories, some of which you almost believe:

"When it's your time, it's your time." You hear that a lot in the water in addition to "there's nothing to worry about because most of the great white sightings are juveniles and are under 10 feet long."

Reassuring, isn't it? Only a 10-footer. No reason to panic there.

The thinking goes like this. Juveniles are still learning, they're frisky and they've only recently been pushed from their watery nests.

"Juvenile" sounds almost friendly, like teenagers we have known and ended up loving against all odds. Sounds fine until you couple juvenile with delinquent, which in the case of sharks means that they are curious and may prod, poke or bite something because they are still learning (sharks generally prefer food sources other than your leg).

Feel better? I thought so. If that didn't do it, how about this: The warmer waters in the ocean have brought in an influx of stingrays and young sharks gorge themselves on stingrays.

If none of that puts the swimmer, boogie boarder, surfer or wader at ease, consider the song "Forever Young." In this case, "Forever 5 to 7 Feet." They don't grow. That's what I'm going with.

After I caught my breath, the sharks I saw were beautiful. Dark against the green reef. They probably weren't great whites at all. Just very big fish.