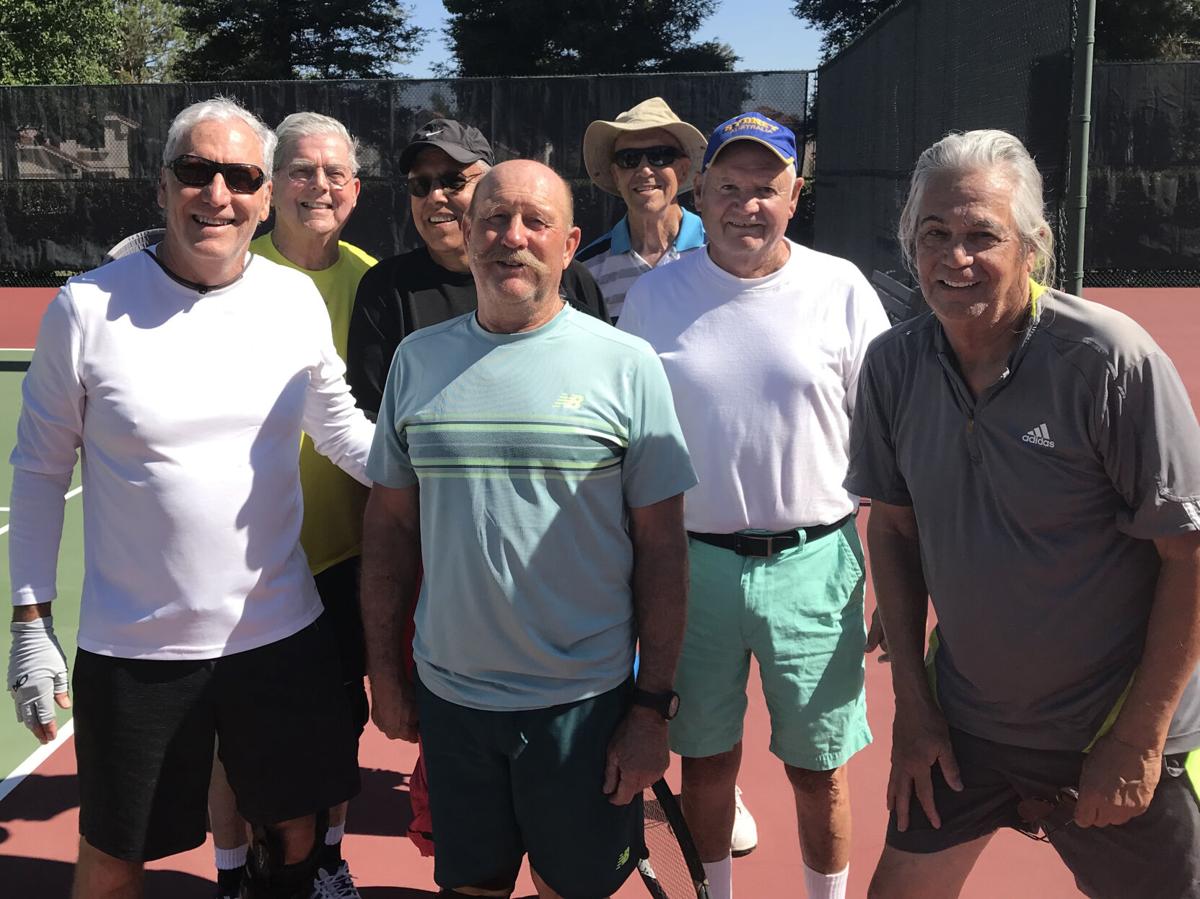 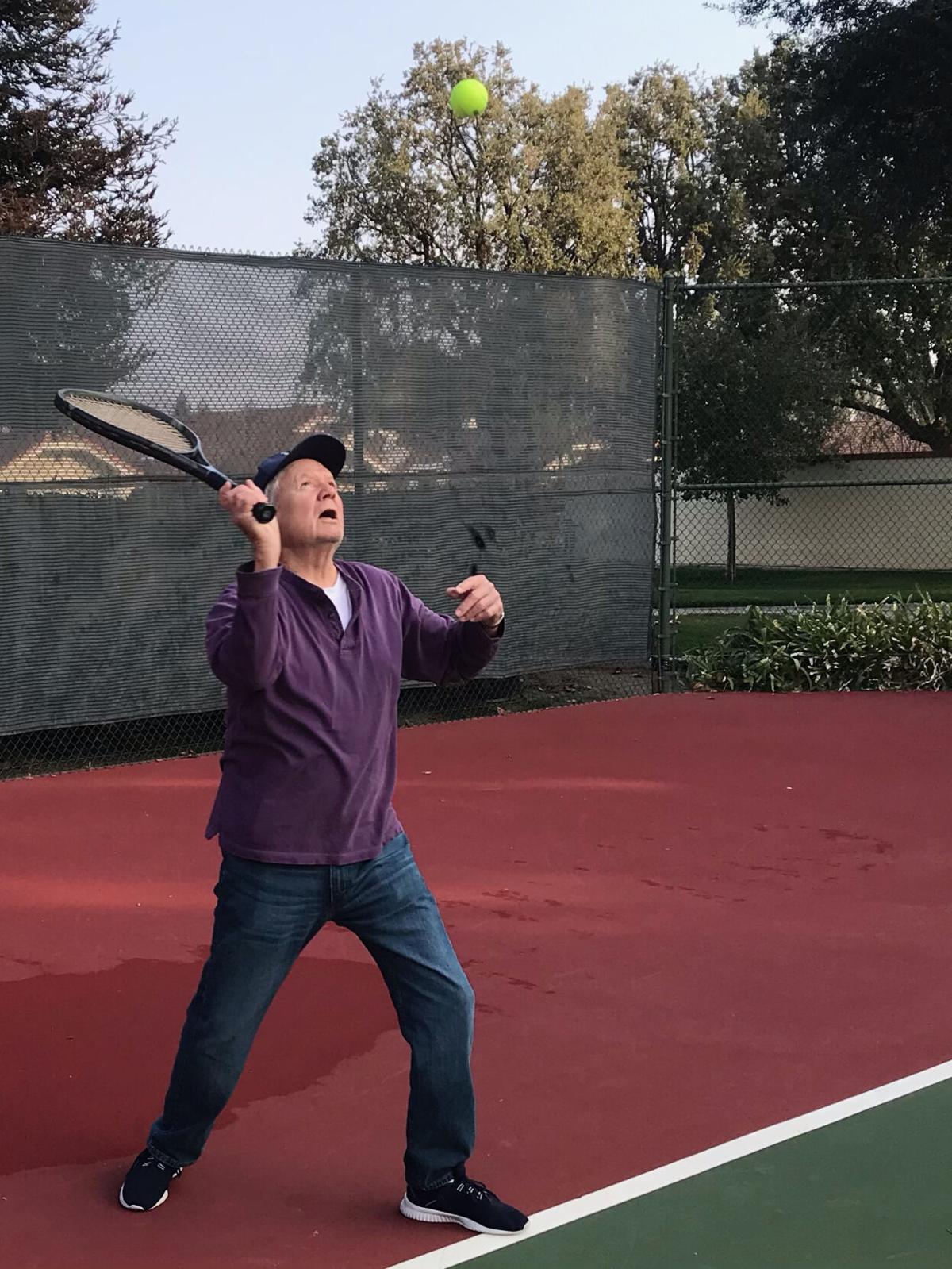 Norm Church, 85, has good genes and wears jeans when he plays in cooler weather. Church is part of the "Super Seniors," an informal league that plays twice a week in Bakersfield. 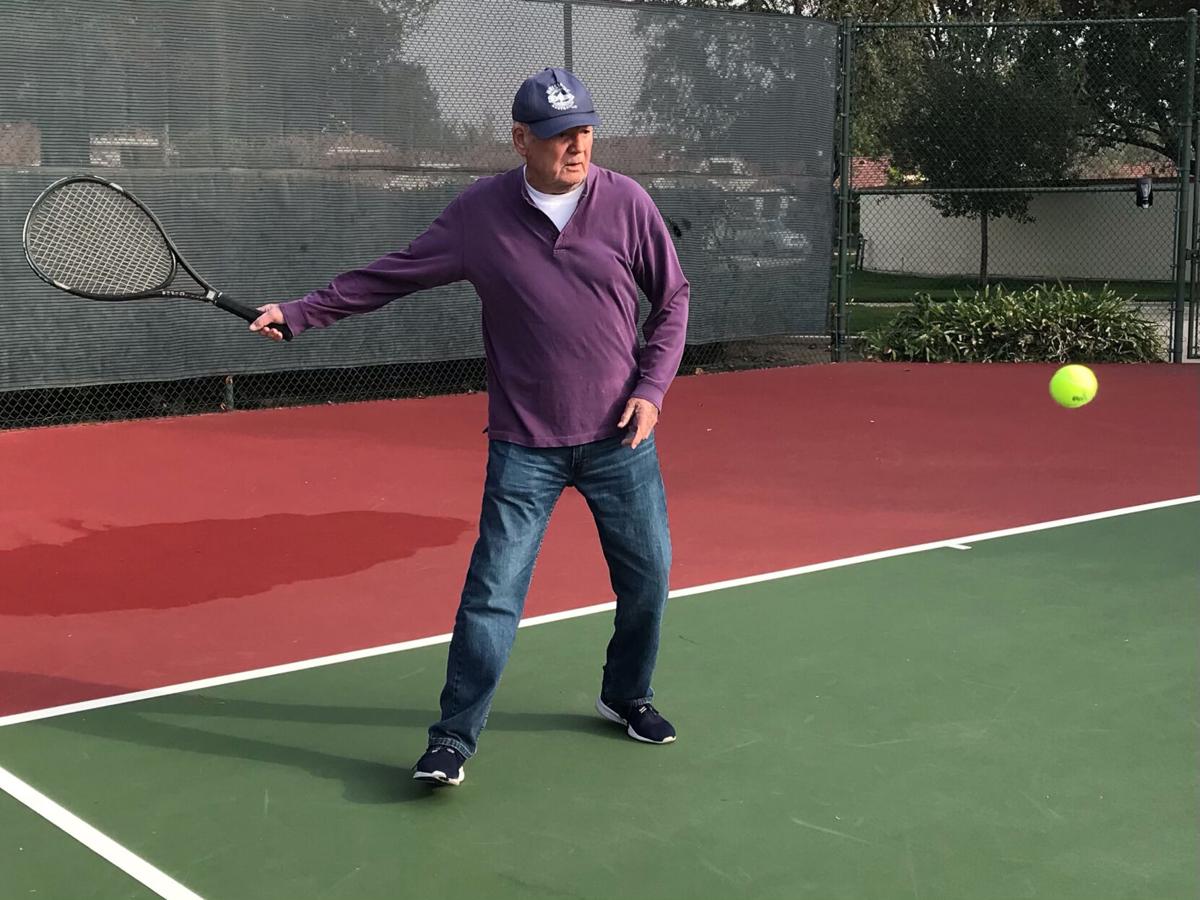 Don't let him fool you. Eighty-five-year-old Norm Church is a terror on the court with the "Super Seniors," the informal league that plays twice a week at the Vineyards and Park Stockdale.

Norm Church, 85, has good genes and wears jeans when he plays in cooler weather. Church is part of the "Super Seniors," an informal league that plays twice a week in Bakersfield.

Don't let him fool you. Eighty-five-year-old Norm Church is a terror on the court with the "Super Seniors," the informal league that plays twice a week at the Vineyards and Park Stockdale.

This was going to just be about Norm, and Norm is worth writing about, but Norm has friends and Norm knows there is nothing better than friends.

“Friends” who, on the tennis or pickleball court, golf course or wherever men gather to lock horns, take every opportunity to “encourage” one another, “support” one another and call attention to one another’s “strengths.”

Norm Church is one of eight to 12 players involved in a twice-weekly round robin doubles match alternating between the two courts at the Vineyards and four at Park Stockdale. Players are supposed to bring a can of new balls every week but some forget and the balls can be short of fluff, color and life.

If somebody has burned through their library, exhausted the TV offerings or completed their lifelong bird list and is looking for some entertainment, the matches are scheduled between 8 and 11 a.m. Tuesdays and Fridays. This might be a first because normally, spectators are as rare as a snow leopard sighting in front of Guthrie’s Alley Cat.

Norm, aka Mr. Magoo because some of his “friends'' say he looks and acts (“cranky”) like the fictional cartoon character, has acquired a certain amount of gravitas and respect because he is 85. Not many people aspire to being 85, but if aspiration leads to realization, looking and acting like Norm, a retired geologist with Chevron and Texaco and Arco who has lived in Libya, Tripoli, Sumatra, Jakarta and Iowa to name a few places and who is also a member of the three, four, three and three club — three wives, four children, three grandchildren and three great-grandchildren — may be the person they want to be like.

Norm not only has good genes — his mom lived to 102 (she started writing her family history at 90), his sisters are 90, 88 and 83 (two still play tennis and all three weigh the same as they did in high school) — but during the winter he wears jeans on the court and the cheapest tennis shoes he can buy.

“Norm is styling and profiling,” said Darrell Muhammad, who sells real estate when he’s not dishing the tennis dirt with the boys.

In addition to Muhammad, who is the youngster at 48, the Norm admirers and wannabes, ranging in age from 59 to 82, include Bill Leuhe, Gary Guinn, Rick Davis, Ron Duran, Dave Hallett, Jerry Lunde, Chris Campoy, Lenny McKinder, Jim Carnal and Craig Hill.

Other than Muhammad, nobody is gainfully employed and they don’t seem to miss whatever they did before to have been considered contributing members of society. This gives them more time to work on their dizzying array of dropshots, spins, lobs, cut forehands and equally important, their on-court repartee.

Line calling is loose and not only are foot faults allowed but encouraged. Norm has earned special dispensation and has been told by the group that if is still playing at 90, he will be allowed to hit the ball on the second bounce should he need to.

I heard about the “Super Seniors” from Jim Carnal, a former high school teacher in Taft with whom I worked at the paper before he got smart, earned his credential and became a teacher.

This is a rain-or-shine group and has to be because when I watched there were wet spots on the court from rain the night before, even after being squeegeed by Davis and Duran.

It was worrisome. Wet courts, a cold day, players in their 50s, 60, 70s and 80s. I wondered if somebody should have preemptively called Hall Ambulance and had the meat wagon idling in the adjacent parking lot immediately to the east as you might have for a high school or college football game.

I relaxed after watching a few games. Nobody was moving fast enough to risk injury. Risk injury and also risk that your fellow competitors might care or offer sympathy if you were to get hurt.

For the first 40 minutes of play, there was no Norm, Norm who was meant to be the singular attraction.

“He can be a bit of a prima donna,” somebody said.

“He’s probably putting on his makeup,” said somebody else.

Norm isn’t stupid. Arrive early or on time and risk getting lost among the athletic riffraff. Show up as he did, closer to 9 o’clock after most players had shown their stripes and he would be like quarterback Reno Hightower running out of the locker room wearing his white shoes in “The Best of Times,” to the oohs and aahs of the crowd.

Norm looks like Jack LaLanne had LaLanne played tennis. Trim, ruddy complexion, wearing his customary jeans and $20 Costco shoes. With Norm in the house, the needling picked up and “compliments” flew like porcupine quills.

This is tennis that invites heckling both from the players and member(s) of the audience. Norm is either of the subject of many of the exchanges or the originator:

“Shots are terrible and many are from the same person, one point apart.”

“You never see any of this on TV.”

“The sun was in my eyes" (when Norm misses a shot and regardless of whether the sun is out).

“Give me all you’ve got" (awaiting the serve).

“Is that all you’ve got?” (follow-up if Norm wins the point).

“That was my power shot" (after a drop shot winner).

After a particularly long and well-played point, the ponytail-wearing Gary Guinn says, “Tennis accidentally broke out.”

A few minutes later an unusually large black bird flew over the court.

“I’ve heard they can smell death from way up there,” said Craig Hill, retired from UPS.

“I wonder if the bird is trying to tell us something,” Guinn said. “We’ll see if he comes back.”

Players switch partners after four games and it’s hard to tell who is winning and losing.

Just when you think all is lost and Bill Tilden might be turning over in his grave, somebody comes up with a brilliant shot, breaks the speed limit on a passing shot or covers a lob like Federer doing everything but swatting it between his legs for a winner.

Then you wonder: Are these guys sandbagging because that’s some pretty good stuff? The next point Mr. Tennis drives it to the bottom of the net or hits the back fence on the fly on a creampuff sitter and things go back to a comfortable normal.

Tuesday is like Friday and Friday Tuesday for Norm and his band of admirers and wannabes. Wanna be happy, wanna be outside and wanna be having fun.

The kind of wannabes that most of us wanna be.