Daniil Medvedev, of Russia, hugs Novak Djokovic, of Serbia, after defeating Djokovic in the men's singles final of the U.S. Open tennis championships on Sunday in New York. 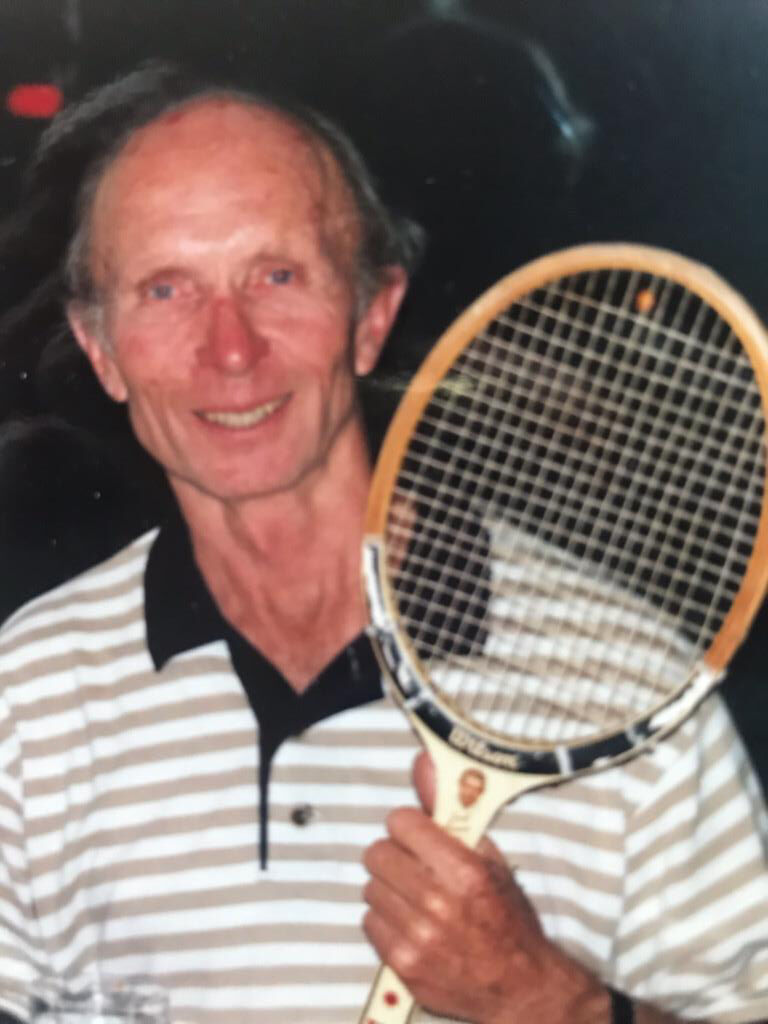 Jim Blom died recently, He was a fixture in the tennis, oil and philanthropic world in Bakersfield.

Emma Raducanu, of Britain, returns a shot to Leylah Fernandez, of Canada, during the women's singles final of the U.S. Open tennis championships on Saturday in New York.

Daniil Medvedev, of Russia, hugs Novak Djokovic, of Serbia, after defeating Djokovic in the men's singles final of the U.S. Open tennis championships on Sunday in New York.

Jim Blom died recently, He was a fixture in the tennis, oil and philanthropic world in Bakersfield.

Emma Raducanu, of Britain, returns a shot to Leylah Fernandez, of Canada, during the women's singles final of the U.S. Open tennis championships on Saturday in New York.

All a man needs is love. That was the message from Novak Dojokovic when he bowed his head and shed tears two games before losing to Daniil Medvedev in the finals of the U.S. Open Sunday.

Tears, because almost for the first time outside of playing Davis Cup in Serbia, the crowd rooted for him rather than his opponent. Even though he has become one of the greatest players of all time and, win or lose, has turned into a gracious sportsman, fans have always found a reason to root against him. Federer and Nadal, his main rivals, have been crowd favorites and there hasn’t been much affection left over for Djokovic.

Until Sunday. In his moment of disappointment for having not completed the calendar Grand Slam by winning Wimbledon, the French Open, the U.S. Open and the Australian Open in the same year or winning his 21st Grand Slam tournament — one more than Nadal and Federer — Djokovic found some joy in a moment unlikely to produce it because the crowd was pulling for him.

It made him seem more human, approachable and likable than he ever had been. This may translate moving forward in his career.

More tennis because it was a good weekend for the sport, even if tennis is not your favorite thing. How about the U.S. Open final on Saturday where Emma Raducanu from Britain beat Canadian Layla Fernandez?

Two fresh faces, fresh games and fresh attitudes. Everything was fresh. It was like a good farmers market.

Raducanu is 18 and Fernandez 19. Neither was seeded and both were about 100 to 1 shot to win the tournament. Somebody could have made some serious money.

Raducanu had to play her way through three qualifying rounds and then seven more matches in the main draw to win. She did so without losing a set.

Fernandez beat three top five players on her way to the finals.

I came away with this: When you lose the stars, new ones appear. That’s reassuring. Someday I’ll be gone but don’t worry, there will be somebody else and they will be almost as good as I am.

Speaking of stars, Bob Teitsworth died a while back as did, more recently, Jim Blom.

For starters, they were stars in their professional lives, specifically with Occidental Petroleum, which had a huge presence in Bakersfield in the 1960s, '70s and '80s. Each contributed to putting Oxy on the map.

Blom was transferred to Tripoli, Libya, in 1966 and helped discover a couple of oil wells that produced 600,000 barrels a day.

I knew them through the Racquet Club. They were basically studs: They skied, surfed, played tennis, golfed, hiked and weren’t afraid to take their shirts off if the occasion called for it.

Jim raised three outstanding daughters with his wife, Olly: Moni, Christine and Karin. He was of the generation who gave back — the Henrietta Weill Child Guidance Clinic, Pyles Boys Camp, YMCA, CALM and the Gleaners.

He was also calm, thoughtful, courteous and scary, if you wanted to date one of his daughters mainly because he was taller than you no matter how tall you were.

Good guy. Always asked how you were doing, how your parents were doing and he listened to the answer.

I’ve talked to a few people who are vowing not to spend next July and August in Bakersfield if they can manage it. At least we’re talking a good game. What a summer we’ve had. It was hot even for people who like it hot. I’m a homer for Bakersfield but I like it even better when you can read about the daily temperatures from a cool, distant place.

Jenifer Wilbur responded to the column about Bill Taylor, owner of Westchester Liquors, who is still working at 89:

“Just wanted to thank you for the article …'Still in Good Spirits,' you wrote about my Uncle Bill. It was interesting, factual, and captured the true essence of my hard-working uncle. The first line was perfect — even though I know he would prefer to be unnoticed, I’m grateful you took the time to recognize his long standing work ethic. Especially in times like these, it’s so nice to be reminded of special people among us.”