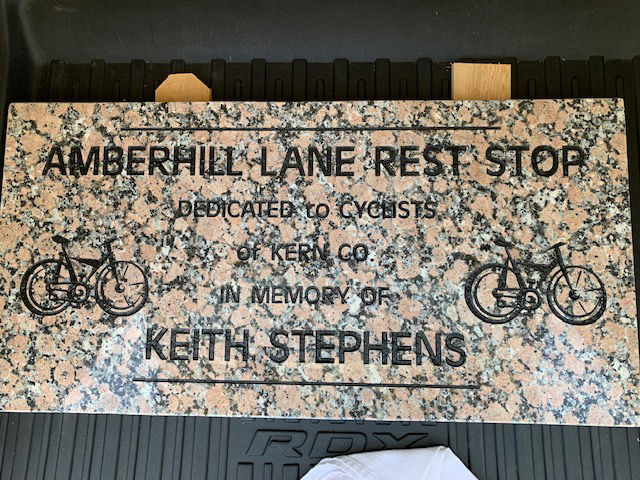 The pink-speckled granite stone honoring the late Keith Stephens who put a fountain and a bench at the base of his property on Granite Road so cyclists could rest and drink. 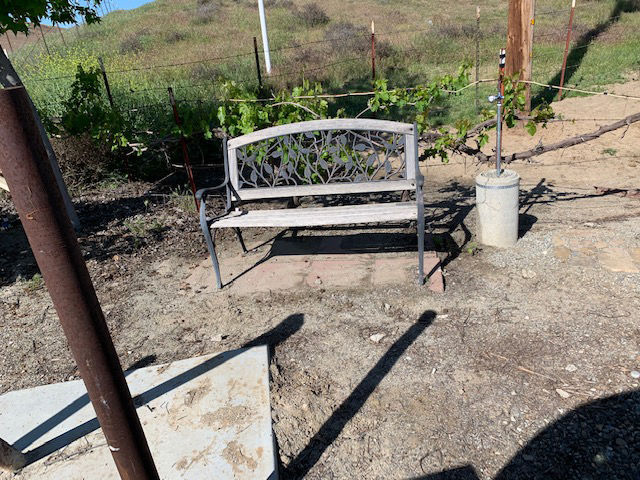 The bench and fountain on Granite Road put in by the late Keith Stephens for cyclists who are out of water and energy. 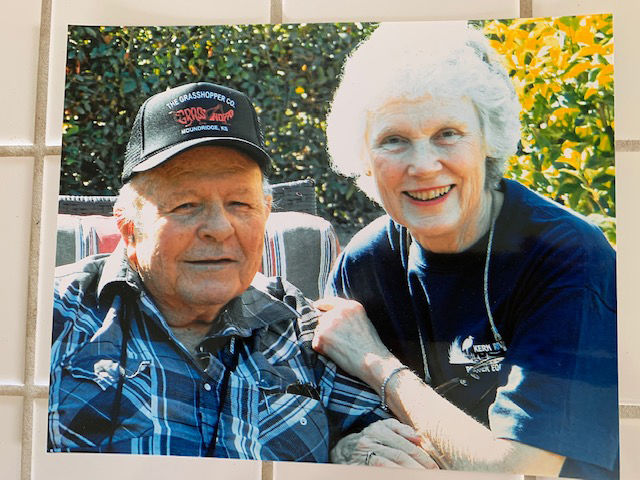 Keith Stephens, seen here with wife Anne, put in a bench and fountain  for cyclists at the end of his driveway on Granite Road in 2009. Stephens, who died a few months ago, will be honored with a ride on June 27.

The pink-speckled granite stone honoring the late Keith Stephens who put a fountain and a bench at the base of his property on Granite Road so cyclists could rest and drink.

The bench and fountain on Granite Road put in by the late Keith Stephens for cyclists who are out of water and energy.

Keith Stephens, seen here with wife Anne, put in a bench and fountain  for cyclists at the end of his driveway on Granite Road in 2009. Stephens, who died a few months ago, will be honored with a ride on June 27.

Maybe Keith Stephens wasn’t a saint, and I don’t know if he was, however if you’re crawling out of Poso on a bike and Marotta’s hurt you, Pfister’s embarrassed you and Laurente is one stroke away from putting you away like winter clothes, the water fountain and bench that appear on your right in the middle of the fourth hill can seem like an oasis in a bad cycling dream.

Thank Keith Stephens. Thank Anne, his wife. Thank your lucky stars as you stare at your empty water bottles and your heretofore not so promising future.

Stephens died in March, at the beginning of the COVID-19 shutdown. He lived with Anne on Granite Woody Road. On June 27, cyclists are invited to come between 8:30 and 10:30 a.m. for a ride honoring Stephens organized by Anne and the Kern Wheelmen.

Anne will have a guestbook at the fountain and she will place a stone made of pink granite underneath the bench carved with the following words:

“Amberhill Lane Rest Stop. Dedicated to the cyclists of Kern Co. in memory of Keith Stephens.”

In May of 2009, Stephens put in a drinking fountain at the end of his driveway on Granite Road and planted two small liquidambars to boot.

Not only was it water, but sweet water drawn from the bottom of a 1,000-foot well. It was usually cool, or cool enough, having been chilled by a 40-foot snarl of PVC four feet below the fountain.

“I just want cyclists to have a nice place to stop,” Stephens said at the time. “Some day, it will be shady.”

I’d met Stephens years before when he worked at Floyd’s. He was one of those Floyd’s guys who could do everything and could explain it to you without making you feel like you were beyond help.

Stephens could be cantankerous and was an independent thinker. I said at the time that “Stephens was so conservative that he made Ronald Reagan look like Huey Newton."

His wife, Anne, owned Kern River Power Equipment for 23 years before selling it earlier this year. They had built a house on Granite Road, 3.7 miles north of where it veers from North Chester. They grew tomatoes, baby corn, Japanese peppers, romanesco, black-eyed peas, green striped Armenian cucumbers, 4-inch-long sugar snaps and raised 100 free-range chickens. They sold both the eggs and vegetables at the farmers market on Saturdays.

Years before putting in the fountain, Stephens met cyclist Monica Anderson at the farmers market. She suggested that if he was looking for friends, and Anderson wasn’t convinced he was, that he would make a lot of them if he put in a fountain on Granite Road.

It was a tough project, even for somebody as handy as Stephens. Stephens had undergone six back surgeries.

His property was also almost a half-mile from the road and to put in a fountain, he needed the right of way from one neighbor and help from two others.

Neighbors joined in. Both Marlon and Nancy Walker and Mark and Stephanie Uharriet donated 1,000 feet of pipe, and John and Wendy Wright gave him the right of way and pretty soon water was flowing from their 1,130-foot-deep well into an an 8-gallon reservoir of cool water. Cyclists can be thirsty, but even with they are near death, eight gallons is enough.

The fountain flowed on May 13, 2009, which was Stephens’ birthday. Stephens was lauded by City Councilman Mike Maggard, and for years cyclists used the fountain, many not knowing who had put it in or why.

Over the years, the fountain needed work and Stephens became too sick and disabled to keep up. Pipes sprung leaks, some needed to be replaced and others redirected. By 2017, the fountain stopped working.

Enter Monica Anderson, one of the original inspirations for the fountain who, with help from Eric Ross, Curt Reynolds and the Kern Wheelmen, spent a Saturday morning trenching, patching and replacing parts. The fountain flowed again.

“The night after he died, I decided I wanted to do something to honor his life," said Anne, who couldn't be at his bedside because of COVID-19.

The 36-by-18-inch pink-speckled granite stone, along with the fountain, the bench, will do that, and thirsty cyclists looking for any excuse to stop, rest and drink before heading home will thank him.