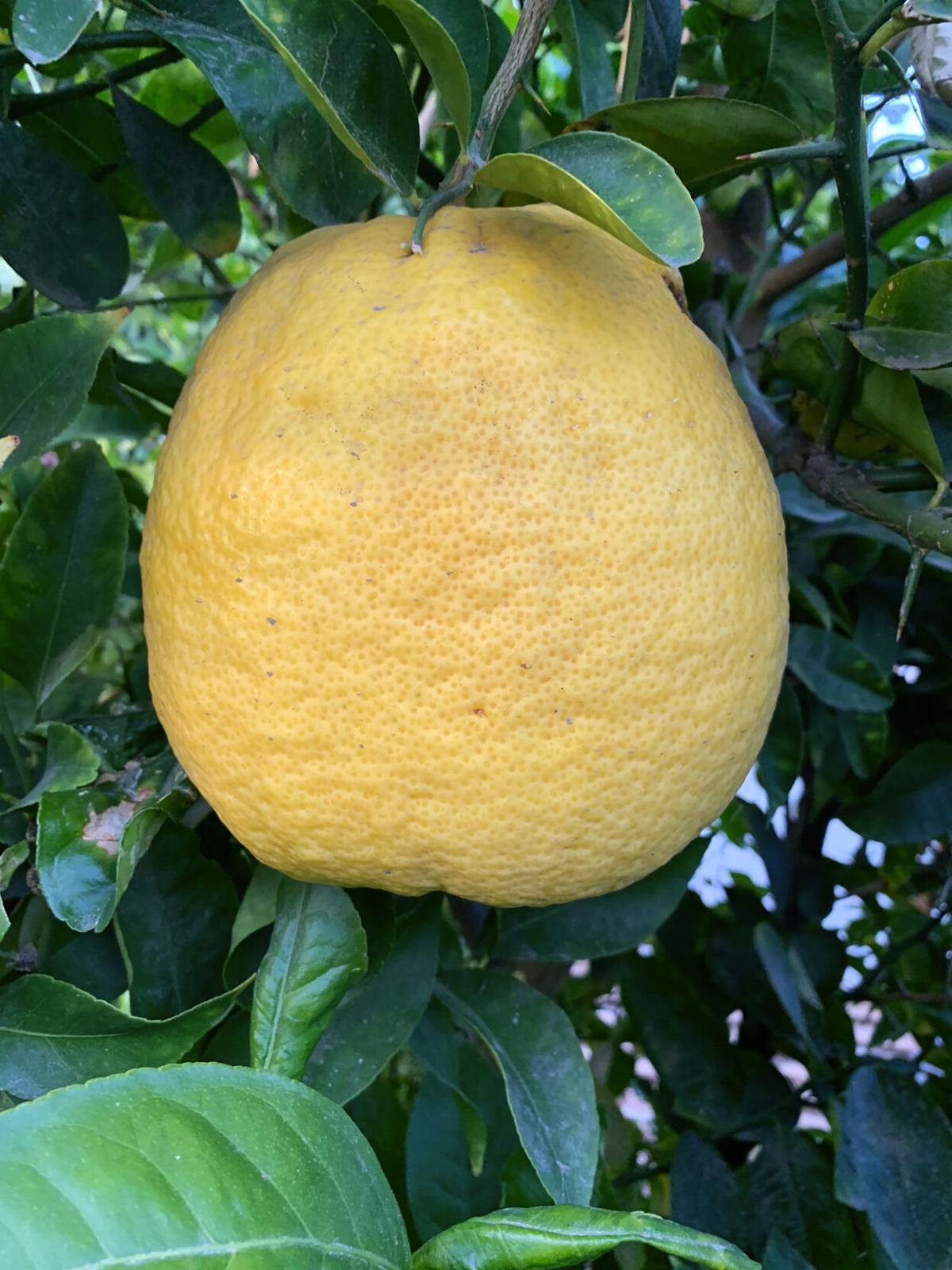 Raul Rodriquez had a huge lemon growing on a tree in his backyard downtown. 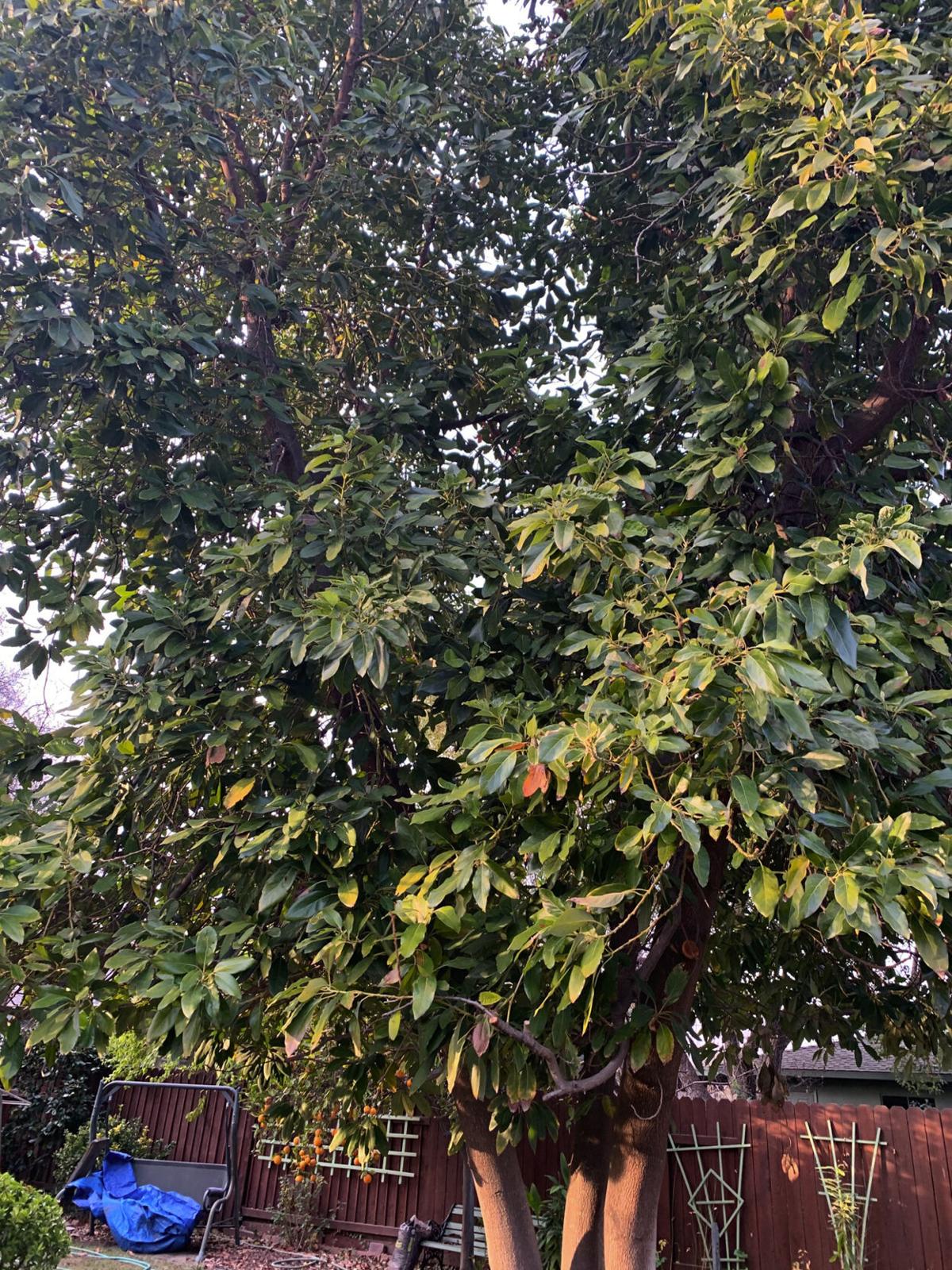 The trees in Raul Rodriquez's backyard are unusually healthy including this avocado tree. Maybe that explains why Rodriquez's lemon tree has produced the biggest lemon many people have ever seen. 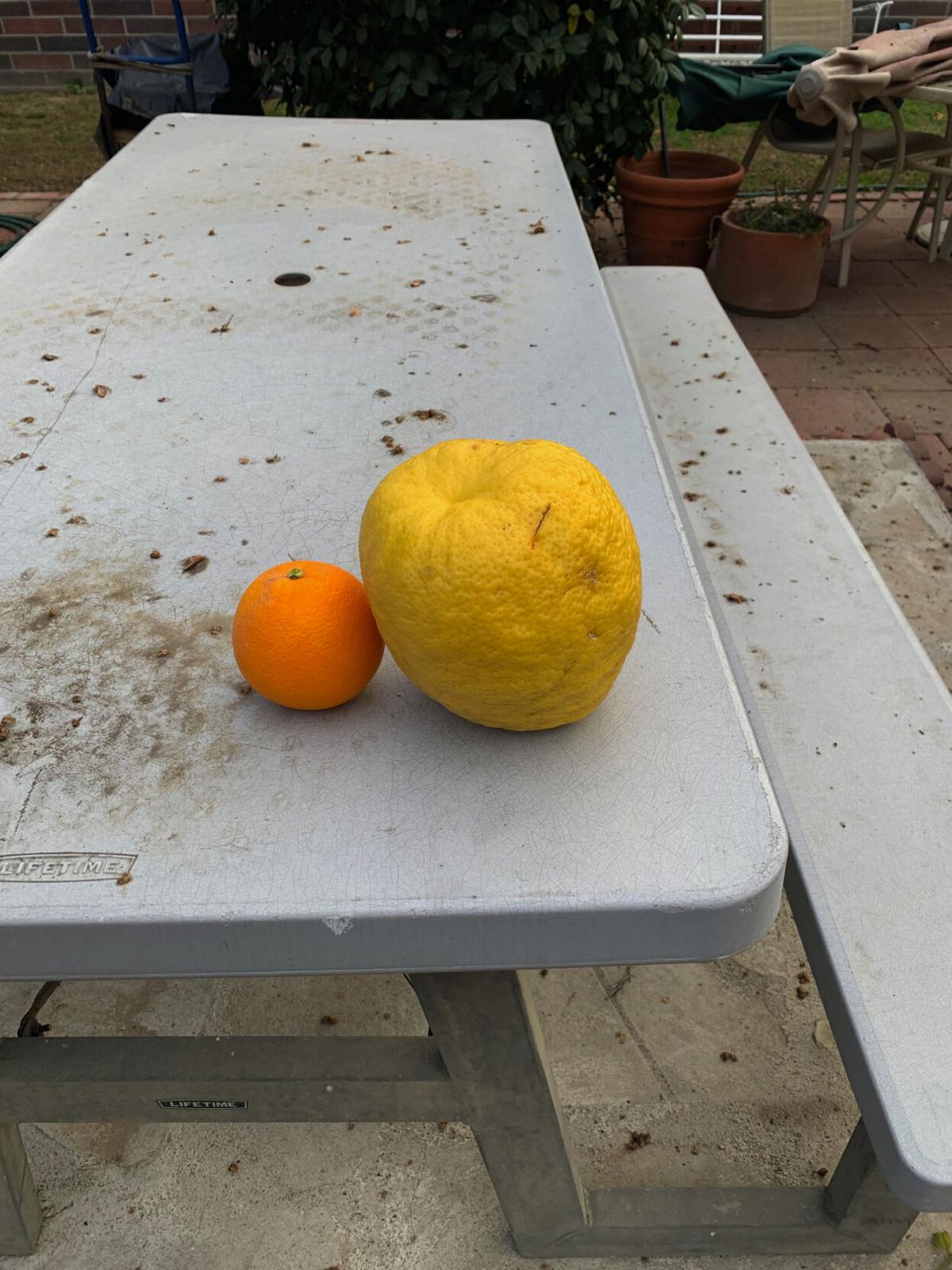 Raul Rodriquez recently grew a lemon, seen here next to an orange for scale, that was 7 inches high, 6 inches wide and weighed 3 1/2 pounds.

Raul Rodriquez had a huge lemon growing on a tree in his backyard downtown.

The trees in Raul Rodriquez's backyard are unusually healthy including this avocado tree. Maybe that explains why Rodriquez's lemon tree has produced the biggest lemon many people have ever seen.

Raul Rodriquez recently grew a lemon, seen here next to an orange for scale, that was 7 inches high, 6 inches wide and weighed 3 1/2 pounds.

I’d met Rodriquez several weeks ago when I was doing a column on the newly widened 24th Street, which doesn’t sound exciting but is thrilling in its own, every-man-loves-a-project way. It was not hard to be impressed by its width, landscaping and the ease with which traffic was whistling through downtown after decades of stop, go and stop some more.

Rodriquez and his wife live on the north side, at the corner of 24th and Cedar. The retired upholsterer, who was sweeping his driveway during the interview, talked about the huge brick sound wall that towered over the south side of his property and backyard.

“It’s not as noisy in the house as you think it might be,” he said.

“I have a big lemon you may want to see,” he said. “My friends say they have never seen a bigger one.”

The big lemon story. In the news business, these are not uncommon and can be lively fillers, or what Calvin Trillin called “Casuals,” lighter style pieces. Big lemon stories don’t have to be about lemons but can be any fruit, vegetable, plant, tree or inanimate object of unusual size or shape. For a while, there was a run on potatoes that looked like Richard Nixon. I’m not sure what it was about russet potatoes and our 37th president but they seemed to make an affable visual pair.

Twenty-five years ago, a lady called the newsroom and said she had a 100-foot cactus in her backyard.

“It’s as high as a telephone pole,” she said.

Lucky for me that most of the reporters were either out for lunch or had already written their big lemon story and I jumped all over it. Every reporter or columnist looks for the defining moment that lifts them from good to extraordinary and this surely was mine.

Vince and Annie Rojas met me at the door and before showing me the cactus — which turned out to be an agave century plant that blooms once in its life and dies — Vince asked me if I wanted to see his beer can collection that once topped 10,000.

“You ought to come and see this lemon before it falls off,” Rodriquez said.

This lemon sounded the peach in "James and the Giant Peach," which got so big that after it broke away from the tree it flattened Spiker and Sponge, James’ wicked aunts.

Rodriquez met me at the side gate near the sound wall and gestured toward a large backyard full of trees including a mandarin orange, two navel orange, a couple of apple, a plum, a peach, a massive avocado and a lemon tree, which I deduced might be housing the big lemon.

“I put a ladder up by the lemon tree so you could take a look at it,” Rodriquez said, and so he had.

I walked toward the tree and from the ground the tree appeared normal and looked like most lemons trees I’d seen except perhaps it was bigger than most. When I climbed the ladder, probably 8 feet off the ground, there was indeed the biggest lemon I’d ever seen.

“Let me get a tape measure,” Rodriquez said.

The lemon was 7 inches tall and 6 inches across, and we later found out it weighed 3½ pounds. The lemon was bigger than most grapefruit and I turned it left and right to see if its profile looked like any public figure. A big lemon is one thing but when it looks like Clint Eastwood suddenly your big lemon story is even bigger.

I accidentally knocked the lemon off the tree. It didn’t flatten any wicked aunts, but it might have crushed a couple of earthworms.

I asked Rodriquez the question I’ve learned to ask in these situations: “Where does the sewer line run?”

Rodriquez pointed to the north wall more than 40 feet away so we took the sewer line out of the equation.

This was downtown and this is river bottom soil but still Rodriquez’s trees seemed unusually large, healthy and productive. I asked him if he had any ideas why.

“Well, somebody once told me that when the land company owned this land, they had their stables here.”

Stables, horses and plenty of you know what. Mix that with sugar sand from the river bottom and you may have your why.

The big lemon. Big stories like this are what I do and why they pay me the big money.