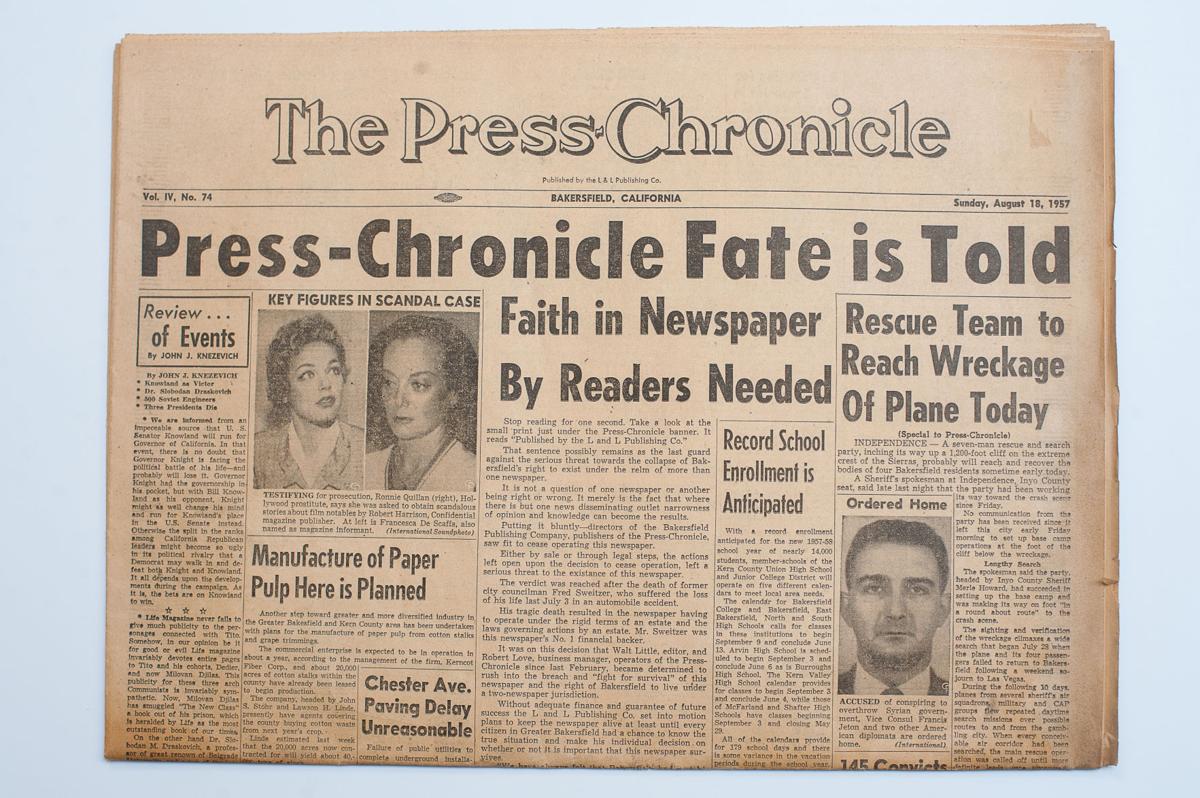 A copy of the short-lived Press-Chronicle. 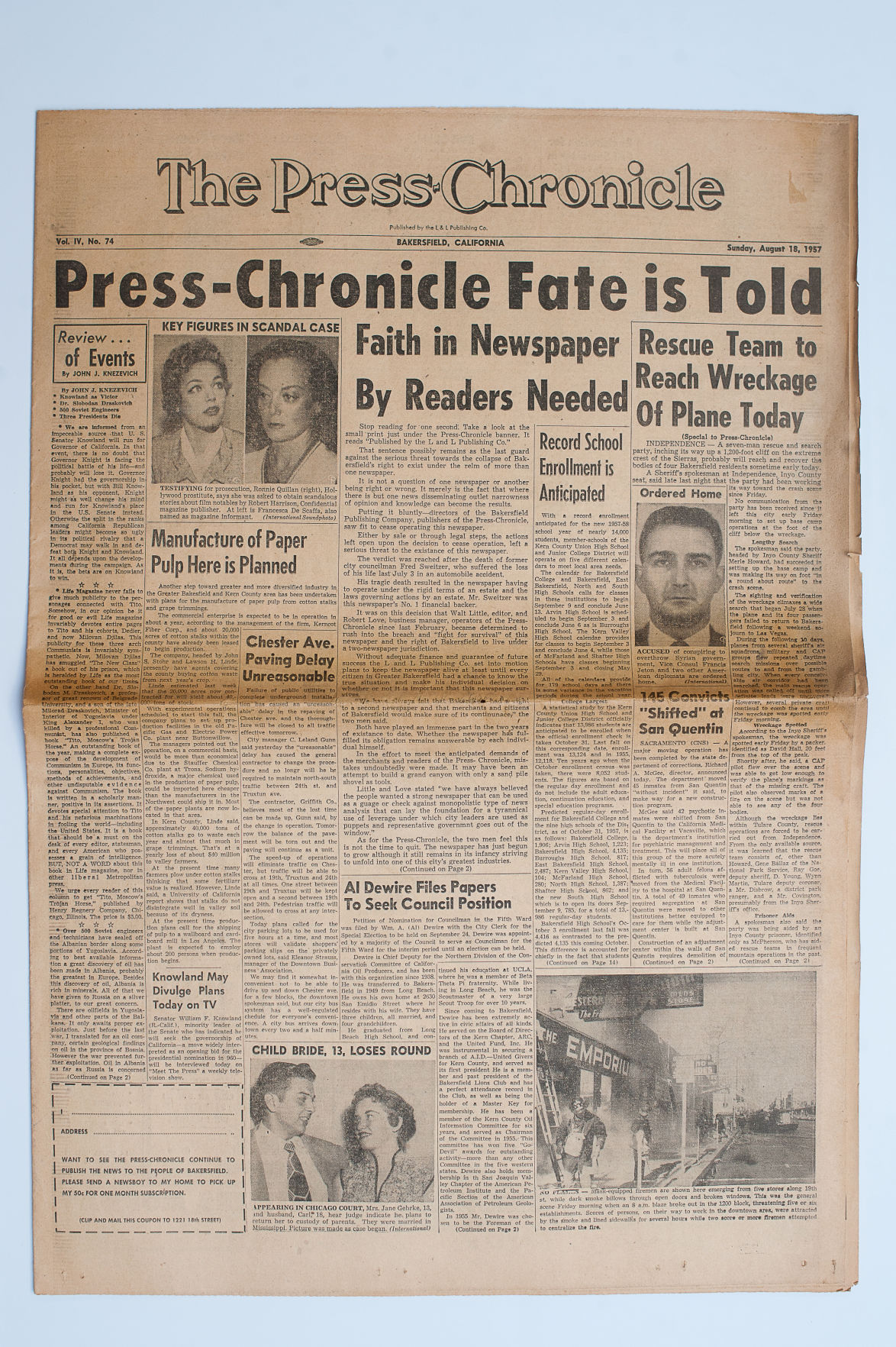 A copy of the mysterious, short lived Press-Chronicle.

A copy of the short-lived Press-Chronicle.

A copy of the mysterious, short lived Press-Chronicle.

Jeff Simpson called and had something he wanted to show us, “us” being me and Glenn Hammett, who works for Bakersfield Life, our sister publication.

Jeff, co-owner of Sequoia Sandwich, is in the midst of expanding Sequoia’s downtown footprint by pushing east into the next building.

“I found something downstairs,” he said, mysteriously enough that we walked over the next day.

This was a construction zone so we shuffled carefully. Jeff led us down a long flight of stairs and it started to feel like we were entering the Chinese tunnels, tunnels that were rumored to connect several businesses east of Chester at the turn of the last century.

A basement that ended in an alcove stacked with newspapers. Dusty, dank, hadn’t-been-moved-in-awhile, newspapers.

Everybody likes a mystery and the possibility of unearthing hidden treasure. Usually, if we find anything, it’s hidden junk rather than hidden treasure and most of us have enough junk and it’s not usually hidden.

The newspapers were copies of The Press-Chronicle, a Bakersfield publication. The dates were between 1957 and 1958.

The Press-Chronicle was printed three times a week — Wednesday, Friday and Sunday mornings — and cost 50 cents a month or $5 a year.

Large, sweeping ads ushered the modern reader through a pleasant walk down Bakersfield memory lane. Mays, your hometown grocer, had “tuna pies 6 for 89 cents and fly swatters two for 9 cents.”

Typewriters — Royal, Remington and Smith-Corona — at Valley Office Supply for $5 down and $1.25 a week.

Sea Breeze, the great old fish market at 2311 R St., had fresh sanddabs for 39 cents a pound and if the “warm weather was getting you down,” tantalizing seafood salads.

Another ad for “Happy, Happy Kaffy Kafy 550: “Almost everybody listens to Happy Kafy.”

If your heart and eardrums could take it, there was big-time wrestling at Strelich Stadium, 2201 V St., Thursday 8:30 p.m. featuring a grudge match between “Sky Hi Lee,” vs. Wee Willie Davis.

“The State Board of Agriculture protests $1 an hour minimum wage” was the lead article in the paper on Sunday, Dec, 22, 1957.

There was a freak accident involving Roy C. Browning, who was in fair condition in Mercy after being hit by a 500-pound hay bale that broke loose from a truck stacked with 26 other bales.

Countering loose hay bales and a catastrophic wage increase was some good news for old people: “Proving middle-aged men are not ready for the ash can, Dr. Wilfred G. Slater, who will be 50 in November, swims Catalina Channel in 15 hours, 38 minutes.”

Jay Clarke, “A husky native of Atlanta,” billed as America’s foremost mentalist, had an advice column.

A — “Gary does like you but as you went steady once before and it didn’t work out, I don’t see it happening again. Just be friends.”

A — “No, as he will not stop drinking, and his disease and the drink together will eventually get him.”

A — “He gave it to his sister, Martha, to keep it for him and she still has it, but you had better get an attorney to handle it for you.”

One headline blared “Faith in Newspaper Readers Needed,” imploring readers to subscribe. They did for a while, but the paper, which seems to have been printed some of the time in the space in which Sequoia is expanding, vanished shortly after, leaving a compelling snapshot of Bakersfield at the end of the ‘50s.

Contact Californian columnist Herb Benham at 395-7279 or hbenham@bakersfield.com. His work appears in The Californian on Sundays, Tuesdays and Fridays; the views expressed are his own.

Weatherby's almost made it to 100 years.