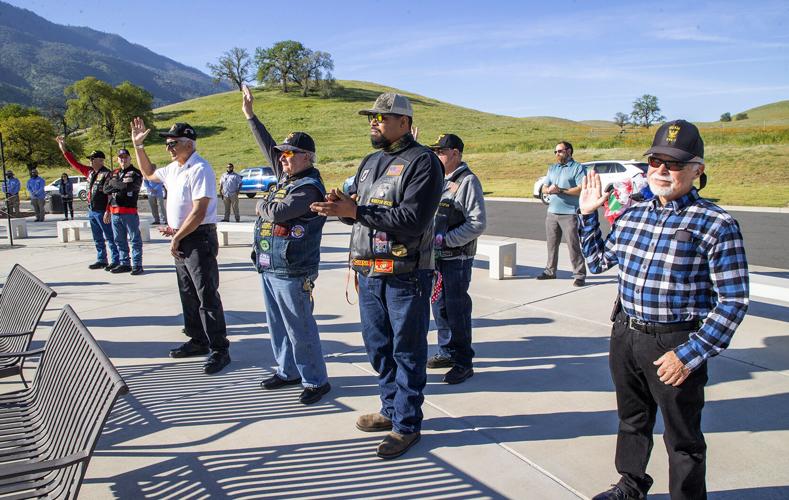 Vietnam veterans were asked to raise their hands so they could be honored and recognized at the Vietnam War Commemoration, held Thursday at Bakersfield National Cemetery in the Tehachapi Mountains southeast of Bakersfield. 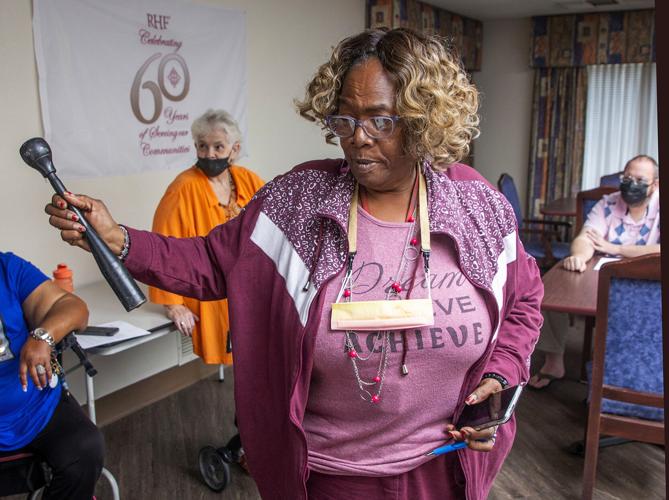 Frances Hill, 72, an eight-year resident of the Lowell Place apartments in central Bakersfield, shows a reporter her "equalizer," a metal gear shift that she says can be used to defend herself against potential attackers. Crime issues at the apartment complex have left several elderly residents fearful.

Vietnam veterans were asked to raise their hands so they could be honored and recognized at the Vietnam War Commemoration, held Thursday at Bakersfield National Cemetery in the Tehachapi Mountains southeast of Bakersfield.

Frances Hill, 72, an eight-year resident of the Lowell Place apartments in central Bakersfield, shows a reporter her "equalizer," a metal gear shift that she says can be used to defend herself against potential attackers. Crime issues at the apartment complex have left several elderly residents fearful.

We never heard about the tribute. Was it promoted beforehand in The Californian? I do read the paper every day with my husband and we do not recall seeing any promo on it. Thank you, Christine, and thanks to your colleagues, for your hard work in our community.

— A Marine Vietnam veteran and his wife

Peterson: It's an excellent question. Organizers of the ceremony alerted news media about the event, and wrote: "Due to VA restrictions for COVID, there can be no pre-event publicity."

That's a tough one for media who endeavor to share information, as opposed to withholding it. But if the cemetery could only accommodate a given number of people, would we have been helpful to direct people there?

While more events are taking place outside our homes than at any time in the past two years, I think we as a community are still navigating where we're at in this pandemic. The items that come across my desk range from tight precautions (such as Zoom meetings) to a pre-pandemic state of affairs.

Hopefully reporter Steven Mayer's story and Rodney Thornburg's photos at Bakersfield National Cemetery captured the spirit of the event for veterans (and others) who could not be there.

Reader: Hi, Steve, I just wanted to let you know that the wheels are still turning because of your article ("Rash of crime, trespassing has retirement community feeling vulnerable," March 17) about us here at Lowell Place.

This coming Thursday at 10 a.m., someone from the Bakersfield Police Department is coming to talk to us about safety issues.

And today the glass security door was fixed. It can no longer be pulled open. People have to have the “white key fob” to use on the machine outside the doors, or from the list on the wall, call someone to let them in. Transients are no longer going to push their way in.

Your article was key to getting the wheels moving.

I can’t thank you enough.

— Blessings to you, Vicki K. Jameson

Peterson: When a resident of Lowell Place alerted us about concerns in the retirement community, I knew there was a story to be told, as did Steven Mayer, the reporter who pursued it.

It's gratifying to hear that by shedding light on the problems you and other residents experience, "the wheels are moving," as you put it, Vicki. Bringing attention to community challenges is one of the most powerful roles a news organization can fulfill.

Blessings to you, Vicki.

Reader: I've been elsewhere and now reading print I've missed. I, too, was disappointed in local media coverage of Biden's State of the Union speech. I am a very conscientious news junkie. ...

Back to what is relevant to The Bakersfield Californian and editorial policy. Why would any Democrats offer any comments to The Californian, knowing how the local district is biased, voting 2-to-1 Republicans and the gerrymandered district, which is really heavily Hispanic and not aligned with Republicans, their voice is sliced up and diminished, if not silenced to the point of being inconsequential. Leaving Kevin McCarthy without any political opposition.

Why not state something closer to reality instead of hiding behind deadlines? ... These crazy assertions, dominating Republicans, is much closer to the truth than to assert no one Democrat took the time to make print deadlines.

Peterson: Wade's email subject line said he was responding to my March 4 Sound Off, which kicked off answering the question "Where were the Democrats?"

I wrote: "The Californian asked Bakersfield's state senators, assemblymen and U.S. representatives — all of them — for their response to President Joe Biden's State of the Union address. Those who provided a response by our print deadline were included. Because not everyone provided a response, at the end of the presentation of the statements we received, we noted: 'The above statements were issued as of The Californian's press time.'"

I am not "hiding behind deadlines," Wade. That's what happened. I can't make people respond. Are you really suggesting we received responses on time that we didn't use? Because that's not true.

As I see Sound Off as a forum to educate on how we do things, I will add this: There are some instances when we hold a story to a later day to give someone a fair opportunity to respond. However, I think most would agree that wouldn't really work on coverage of the State of the Union. Would readers want to view reactions to it days after the fact? Not really. We have to be timely, too.

Executive Editor Christine Peterson answers your questions and takes your complaints about The Californian’s news coverage in this weekly feedback forum. Questions may be edited for space and clarity. To offer your input by phone, call 661-395-7649 and leave your comments in a voicemail message or email us at soundoff@bakersfield.com. Please include your name and phone number; your phone number won’t be published.