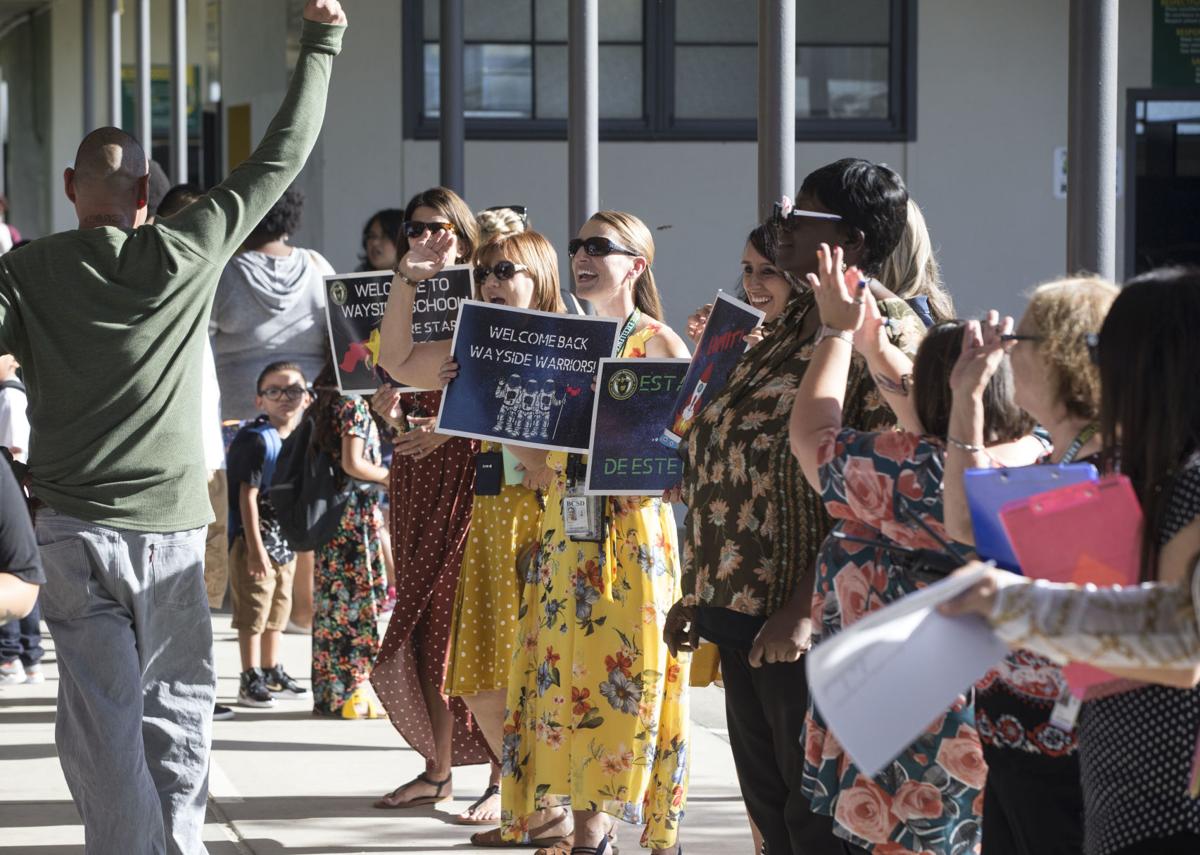 Teachers line up to welcome parents and students back on the first day of school at Wayside Elementary on Aug. 14, 2019. The first day of school will inevitably be much different this year, as school districts around Kern County and across the nation grapple with how to deliver instruction to students. 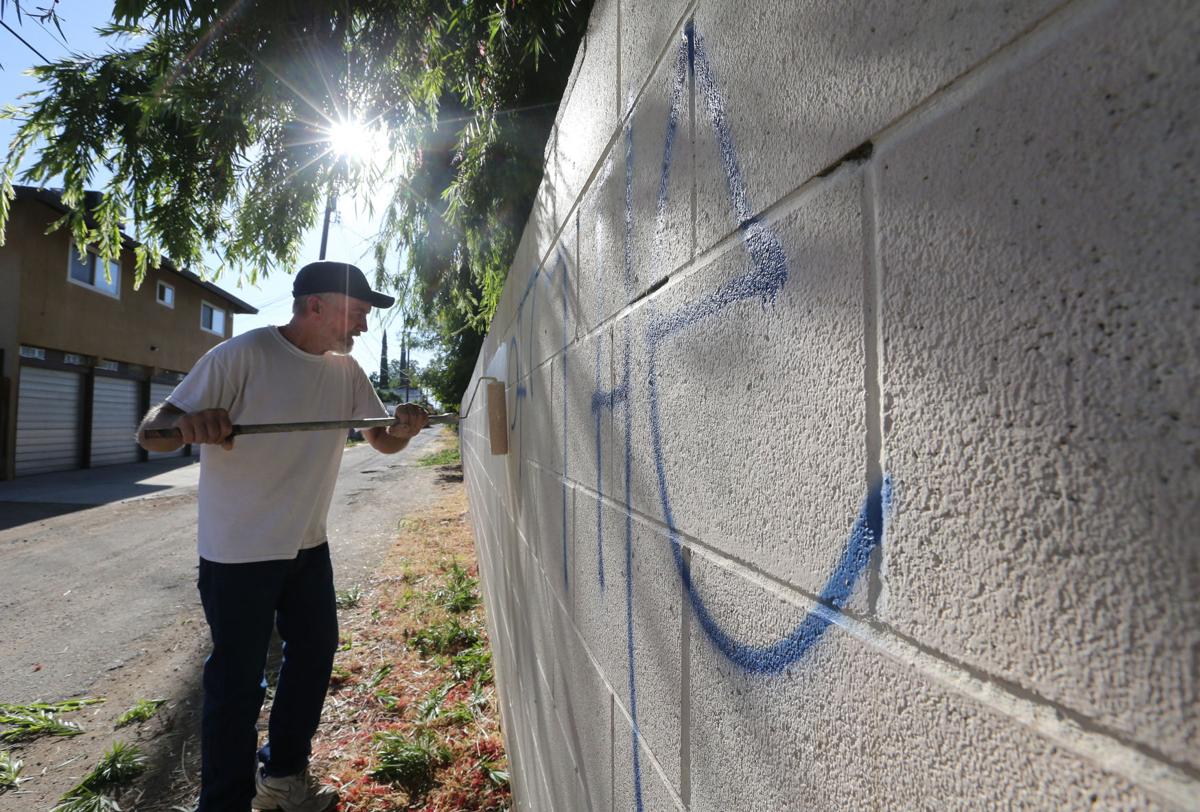 With the morning sun gleaming through the trees overhead, Jeff Copeland could be mistaken for the custodial angel of Oildale. On this weekday morning, the one-man cleanup crew is painting over graffiti on a wall in an alley off Airport Drive. 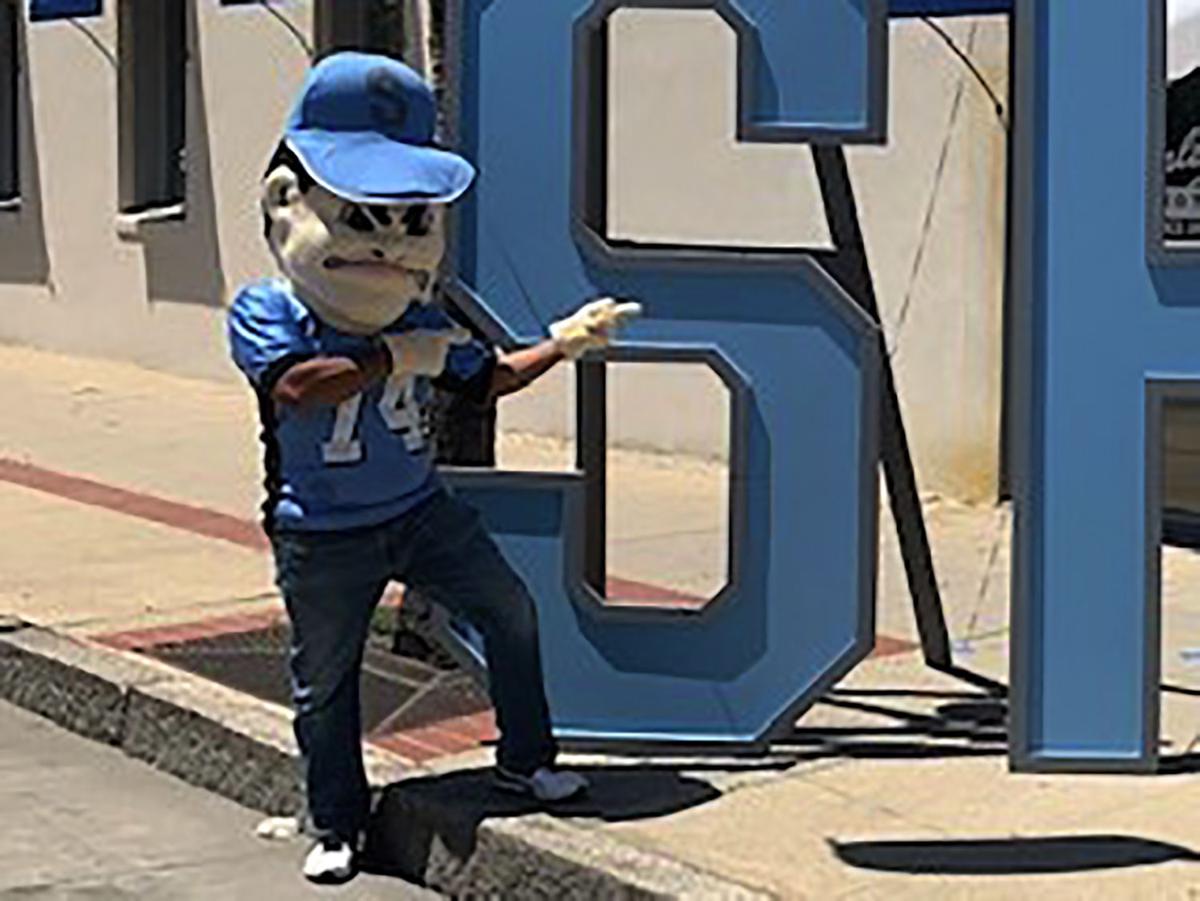 The South High School mascot has long ago shed its Confederate imagery. The mascot today dons a baseball cap with the letter "S" on it and is made to look like a rebel, but not one from 1861 to 1865.

Teachers line up to welcome parents and students back on the first day of school at Wayside Elementary on Aug. 14, 2019. The first day of school will inevitably be much different this year, as school districts around Kern County and across the nation grapple with how to deliver instruction to students.

With the morning sun gleaming through the trees overhead, Jeff Copeland could be mistaken for the custodial angel of Oildale. On this weekday morning, the one-man cleanup crew is painting over graffiti on a wall in an alley off Airport Drive.

The South High School mascot has long ago shed its Confederate imagery. The mascot today dons a baseball cap with the letter "S" on it and is made to look like a rebel, but not one from 1861 to 1865.

Should children — and adults — attend classes this fall in person, remotely from home or follow some kind of hybrid model as coronavirus cases and deaths continue to climb?

It's a question politicians, school administrators, boards of trustees, teachers, professors, parents, school staff and the students themselves have been grappling with across the country and in Kern County.

And certainly not everyone agrees on the answer. Just in the last week, trustees at the Kern High and Bakersfield City school districts approved a distance learning model for the first quarter of the school year. The Norris School District has asked parents to complete a reopening survey, outlining a variety of options. McFarland Unified School District plans to reopen in-person instruction in phases. And that's just a smattering of the current plans from the 47 school districts in Kern County. We have our colleges, too.

On Friday, Gov. Gavin Newsom set strict criteria on school reopenings that "makes it unlikely the vast majority of districts will have classroom instruction in the fall as the coronavirus pandemic surges," The Associated Press reports.

There is certainly no shortage of opinions out there. What do you think? We're inviting anyone who has a stake in what happens — don't we all? — to write what plan you think is best and why in no more than 100 words. Please provide your name, address, phone number, which district you're connected to and who you are — teacher, school staff member, parent, student, etc. (Your city or town will be published, but not your exact address or phone number). Put "school" in the subject line and email your response to opinion@bakersfield.com. The deadline is Wednesday, July 22, for this special request for letters. We'd like to collect as many opinions on this topic as possible for publication.

Reader: Head and shoulders above the rest ... In these times of coronavirus, BLM riots, political hatred and much more, it is so nice to read Steven Mayer's writings, from the life story of Fuzzy Owen to the family that was locked-in at Hillcrest Cemetery on Memorial Day, and the mosquitoes in town.

You can always count on Steve to get the interesting and not-so-known things that are happening in our world. Many times I wonder why I keep my subscription to TBC (since the early 1980s) when I read all the bad, depressing and Trump-hating news, but Mr. Mayer lets us know there is much more GOOD out there. His latest was Saturday, July 11, "Oildale's one man clean-up crew." Jeff Copeland is a true good soul, hardworking, cares about our community, doesn't need anyone to tell him what to do. He just goes out and cleans up streets, and paints over the awful graffiti.

Jeff Copeland and Steven Mayer, you are both GOOD CITIZENS and OILDALE thanks you!

Peterson: Thank you, Fred and Linda, for subscribing to The Californian since the early 1980s. I greatly appreciate our longtime subscribers.

You're right: There is a lot of "bad" and depressing news that we have a responsibility to report every day. But it's also our job to find the positive, happy, good and different, and Steven digs up a lot of those stories for our readers.

Thank you for your kind words for Steven's work, and I join you in thanking Jeff, featured in this latest story, for his efforts to improve Oildale.

Reader: You're (Robert Price) very unfamiliar with American history just like many Californians. It's very sad. Did you know no Confederate was charged with treason? Did you know the south seceded because of excessive taxation? Didn't Washington do the same thing? Corwin amendment? No one cared for slaves to be free. It took 100 years for blacks to get rights. The 13th Amendment made us all tax slaves. I highly suggest you stop forming biased, baseless articles if you want to maintain any respect from people who actually know history.

Reader: I am calling about Robert Price's column in the paper today. It was racist, bigoted and way out of line. He had no reason to call people innocent and ignorant. Innocent maybe, ignorant no. We had people in our class that were attorneys, who were lawyers, we had doctors, we had teachers, we had police officers. If anybody is ignorant it is him and he needs to apologize. He never met those people; he don't know those people. And if he wants to get really liberal and racist like he is doing, talk to the Democrats, they're the ones that had the slaves. Thank you.

Peterson: There were several comments about the story ("As South High School considers changing mascot, alumni look back on times surrounded by Confederate imagery," July 12) and Robert Price's column ("ROBERT PRICE: The pageantry was nice when South High students were innocent and ignorant," July 12) dealing with a possible change to the South High Rebel name and mascot. This note from Stephen was directed to Robert, and this voicemail from Martha was about the same column.

Price responds to Stephen: How do you know what I know and don’t know? What a foolish, arrogant, uninformed comment.

Southern states specifically cited preservation of slavery as the reason they were leaving the union. No treason charged? So what? Decision not to charge treason was political and economic, not based on legal definition. Just because I don’t address every nuance of history in a 1,000-word commentary doesn’t mean I’m “very unfamiliar” with it. If you want to debate an issue, you don’t begin with personal insults and broad generalizations. Tip of the day.

Price also responds to Martha: Martha, it would be helpful if you read past the headline. I quoted Theresa Souers, a 1972 South High grad, as saying she accepted all the Dixie pageantry as a teen because she was “innocent and ignorant.” She didn’t mean ignorant in a general sense and neither did I. We meant ignorant about the reality of slavery. I’m sure some of your lawyer-to-be classmates were similarly unsophisticated about U.S. history. I know I was.

You say the column is racist. Be specific. Where? Throwing that word around carelessly contributes to the widespread cluelessness to its meaning. It cheapens it. Writing about race is not racist. It’s writing about race.

Executive Editor Christine Peterson answers your questions and takes your complaints about The Californian’s news coverage in this weekly feedback forum. Questions may be edited for space and clarity. To offer your input by phone, call 661-395-7649 and leave your comments in a voicemail message or email us at soundoff@bakersfield.com. Please include your name and phone number; they won’t be published.