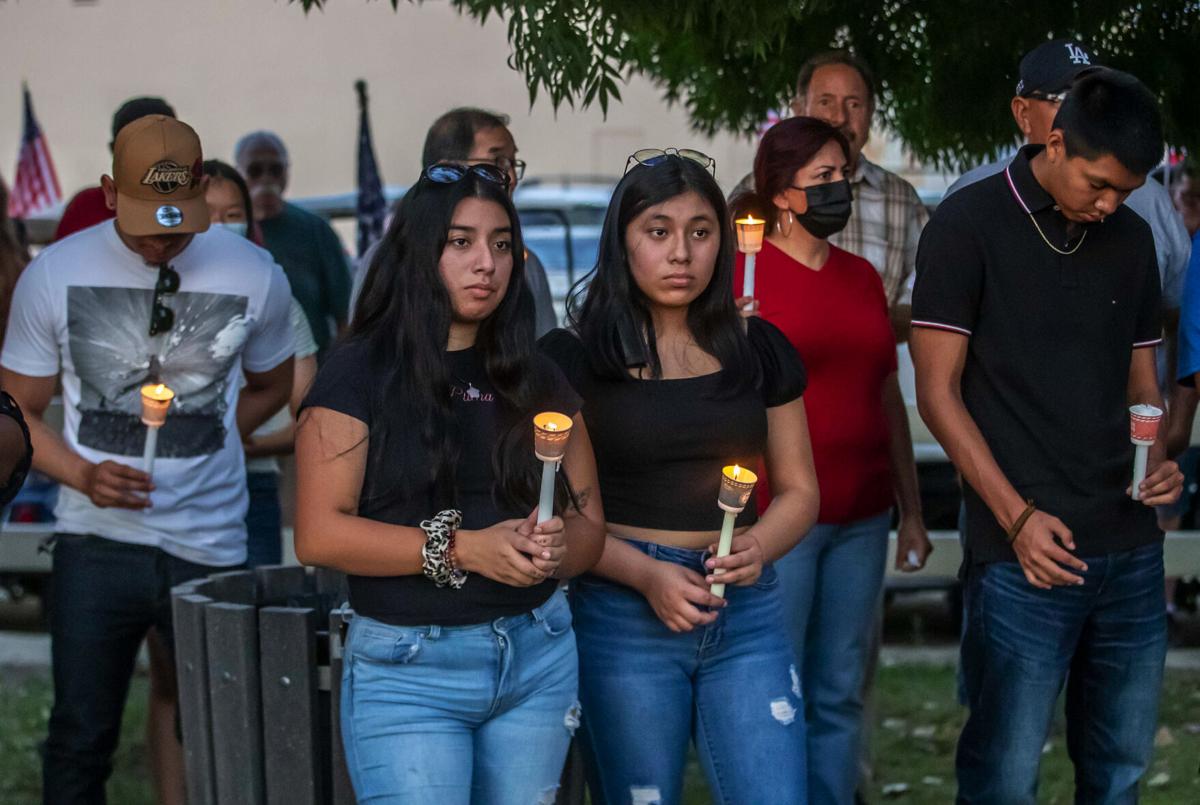 Neighbors and friends of those who were killed July 25 attend the Wasco community vigil the evening of July 27. 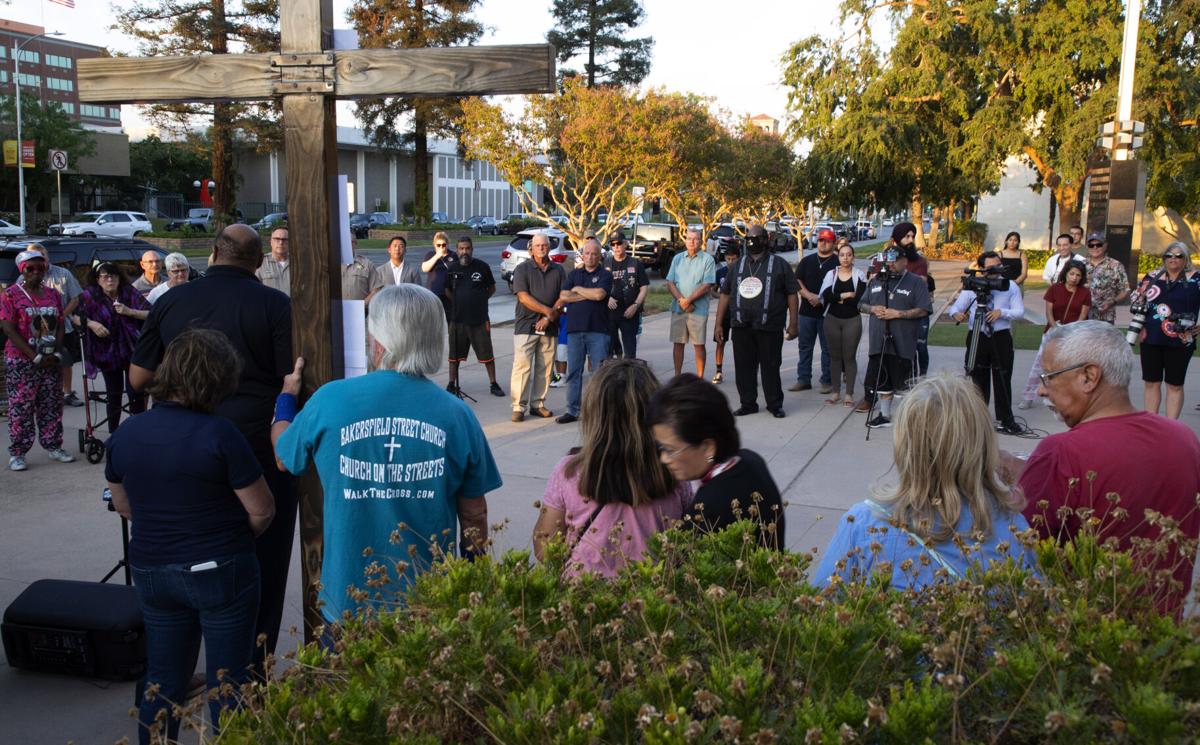 People gather on the evening of July 27 at the Liberty Bell in downtown Bakersfield to pray for law enforcement. The gathering was scheduled after the July 25 mass shooting in Wasco. 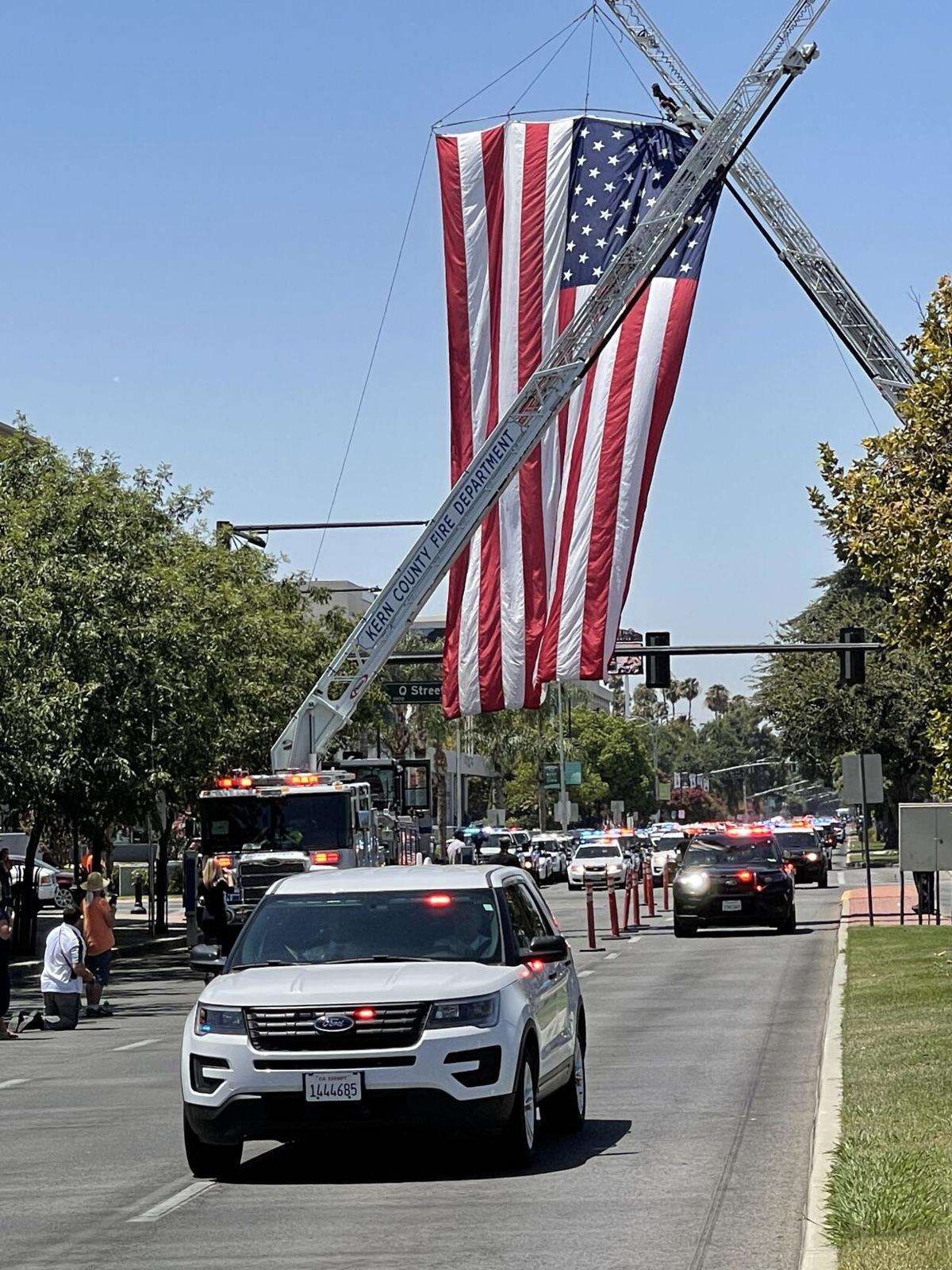 Neighbors and friends of those who were killed July 25 attend the Wasco community vigil the evening of July 27.

People gather on the evening of July 27 at the Liberty Bell in downtown Bakersfield to pray for law enforcement. The gathering was scheduled after the July 25 mass shooting in Wasco.

Reader: I am glad the deputy involved in the Wasco family tragedy has been laid to eternal rest. May he RIP. That sincerely said, The Californian has given entirely too much print (text and numerable photographs) to him since the tragedy. I understand this is a local paper reporting local news. However, a far more balanced reporting of that tragedy would have been appreciated. If not more attention to the Wasco victim and surviving family and friends, then less attention to the deputy. A balance. BALANCE.

I applaud you, Mr. Robert Price, for your column ("In Wasco family tragedy, he lost his closest confidant") of Aug. 1. It shed light on some of the survivors in the small community of Wasco. I can’t imagine how that heartbroken town is coping. Though your article gave readers a much-needed perspective from friends of the victims, a follow-up on how they are coping might be in order. (Including photo — again — of the son who attempted to intervene, his young life’s trajectory cut short, his wife of two years left behind, etc.) Balance.

I rarely write a letter to the editor anymore. Bakersfield is McCarthy country, and like Chief Joseph of the admirable Nez Perce, I feel like “I will fight no more forever.” I’m up against a formidable opponent and the tide of battle does not change. But in a human interest story like this ...

Again, your column was most appreciated, Mr. Price. More of same.

Peterson: Thank you for taking the time to write, Mary. We have endeavored to be as balanced as possible in our news coverage of the tragedy that took the lives of Kern County Sheriff's Deputy Phillip Campas, a Wasco mother, two sons and their father.

The night there was both a vigil in Wasco (which included statements and prayers for both Campas and the Wasco family) and a prayer service at the Liberty Bell in downtown Bakersfield, I made sure to have both a reporter and photographer at each. When fundraisers were established for both Campas' family and the Ramirez family, we reported on both ("Wasco businesses hold fundraisers for victims of mass shooting," Aug. 3 and "Fundraisers for Deputy Campas' family, Wasco shooting survivors receive outpouring of support," July 30.)

When we — like the general public — were invited to the memorial service for Deputy Campas, we had two reporters and a photographer there. When we saw the "services pending" listings come in for Viviana Ruiz Ramirez, 42; Jose Manuel Ramirez III, 24; and Angel Manuel Ramirez, 17 (the newspaper did not receive one for Jose Manuel Ramirez Jr., 41), we inquired with the funeral home if we could attend and cover any funeral or service. We were told no — and we respected that. We tried to reach out to surviving family members, but we can only interview those people who are willing to talk.

The column by Robert Price was indeed powerful, and added to our community's understanding of this tragedy.

Was our coverage balanced? I believe so, to the extent it could be based on who was willing to be interviewed and where we were welcome.

Reader: Dear Christine, I have followed the coverage of the tragedy from Wasco in The Bakersfield Californian. The focus has remained on the crime’s impact on the family/friends/co-workers. It is also appropriate that it has been used to help educate the public about domestic violence. Thank you for the sensitive and educational approach the newspaper has taken.

Peterson: Thank you for your feedback, Mic. We endeavored to be sensitive, educational, informative and respectful in our reporting.

Reader: What was the significance of the number 1392 printed on the front page of the Saturday, Aug. 7, newspaper?

Peterson: That was Deputy Phillip Campas' badge number, and it was published in last Friday and Saturday's newspapers in his memory. There have been several tributes to Campas that use his badge number. For example, Kern County Sheriff Donny Youngblood has worn a black band around his own badge displaying Campas' badge number.

Perhaps we should have used that number in the stories those days so readers who didn't already know the significance could make the connection.

Reader: I noticed the edition where the publication of final rites for Kern County Sheriff's Deputy Campas were extensive. The word "memorial" was used quite often in the article, but the last rites were NOT a memorial service; they were actually a funeral service. Look up the definition and you will find the difference. With a funeral service, the deceased's corpse is extant in a casket; with a memorial service, there is no corpse nor casket, other than possibly a container of cremated remains. His last rites were a funeral, NOT a memorial service. Correct English usage is bad enough in these times, but let us not make it any worse.

Peterson: Thank you for writing, Bruce, and for your service in what must be a very emotionally challenging profession.

The phrase "memorial service" was used in the story five times. It was also used in the captions.

Please know that the Kern County Sheriff's Office repeatedly called the public gathering for Deputy Phillip Campas a memorial service. I do not know if the KCSO selected that wording, or the family did.

But that's what they called it, so that's what we called it. I'm certainly not going to judge someone's use of the words memorial, funeral, service, wake, vigil, Mass of Christian burial, requiem Mass, K’vurah, prayer service, celebration of life, a Service of Witness to the Resurrection or any other words or phrases used by a particular faith, culture or tradition at a time of profound grief.

That's not my call to make — even if the "death care industry," as you called it, uses particular language.

I think what's important here is to remember that these families — and their extended families, friends, co-workers and in some ways the larger community — have suffered. That's what really matters.

AP normally disapproves of hanging commas or periods, but in this story here it is. but then I’ve never seen a combination of the exclamation point, a close quote and a comma together.

This image provided by Jeopardy! Productions Inc. shows contestant Matt Amodio. Amid the ruckus over the new host of “Jeopardy!”,

LOS ANGELES (AP) — Amid the ruckus over the new host of “Jeopardy!”, contestant Matt Amodio ...

We’ll be watching "Jeopardy!" tonight to see if Amodio hangs on to the championship. At least it now looks like he won’t have to worry about paying off his student loans.

Peterson: I'm going to call this a special case, Stephen. Here's why: The exclamation point in "Jeopardy!" is part of the game show's name. The names of television programs fall under the rules of composition titles in the Associated Press Stylebook, which we follow. Those rules say composition titles belong in quotation marks. Then throw in the need for a comma for the sentence above to make sense, and I'll say you have a special case.

Happy "Jeopardy!" watching. We'll have to see how the new hosts do. It's not easy to live up to Alex Trebek standards!

Reader: I hope this letter gets to you. I am responding to all the criticizing of the Leonard Pitts column. I enjoy Mr. Pitts' column and would hate to see it discontinued all because some in the conservative party have so much trouble hearing the truth. Instead of pretending to be so outraged, look in the mirror and be honest with yourselves. Again, please keep printing Mr. Pitts' column.

Peterson: We've published some letters to the editor from people who don't want to see Pitts' columns anymore. But you and a second writer — her letter to me said "for your eyes only" — urged that he stay. I have no intention of discontinuing Pitts' column. Each reader will like some of the Opinion writers, and dislike others. That's how an Opinion section works.

Executive Editor Christine Peterson answers your questions and takes your complaints about The Californian’s news coverage in this weekly feedback forum. Questions may be edited for space and clarity. To offer your input by phone, call 661-395-7649 and leave your comments in a voicemail message or email us at soundoff@bakersfield.com. Please include your name and phone number.