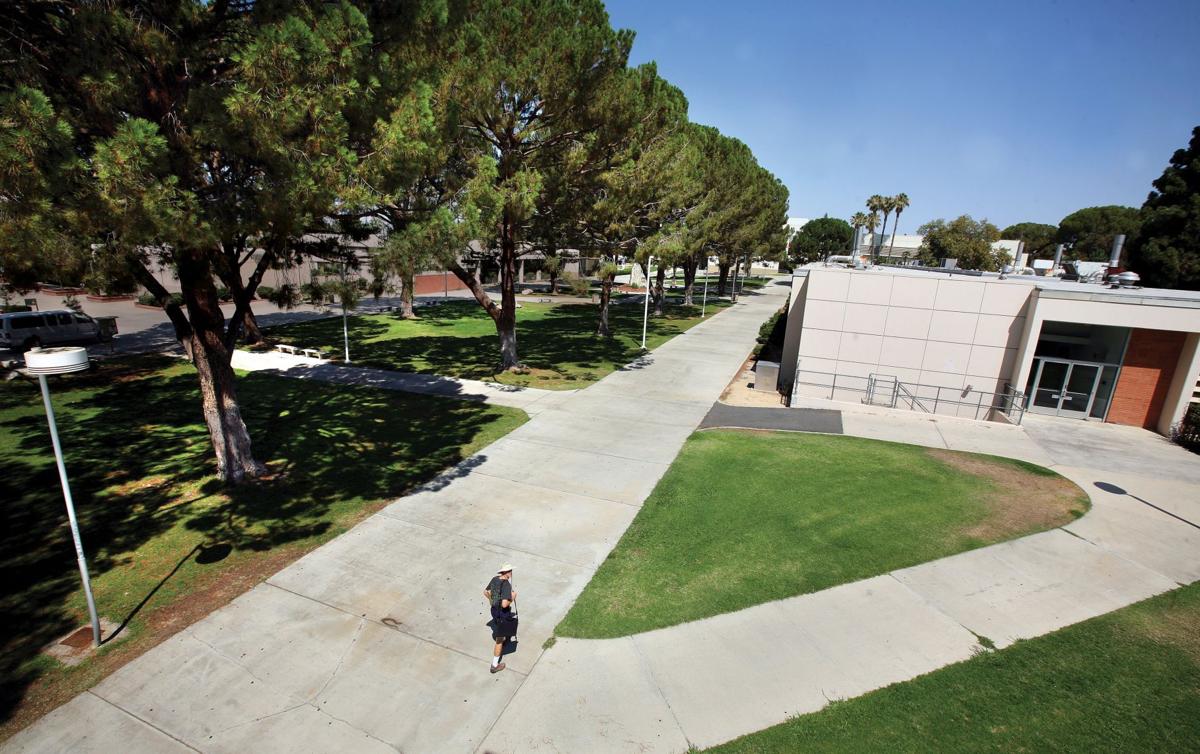 A man walks along the sidewalk on the Bakersfield College campus on a hot summer day. 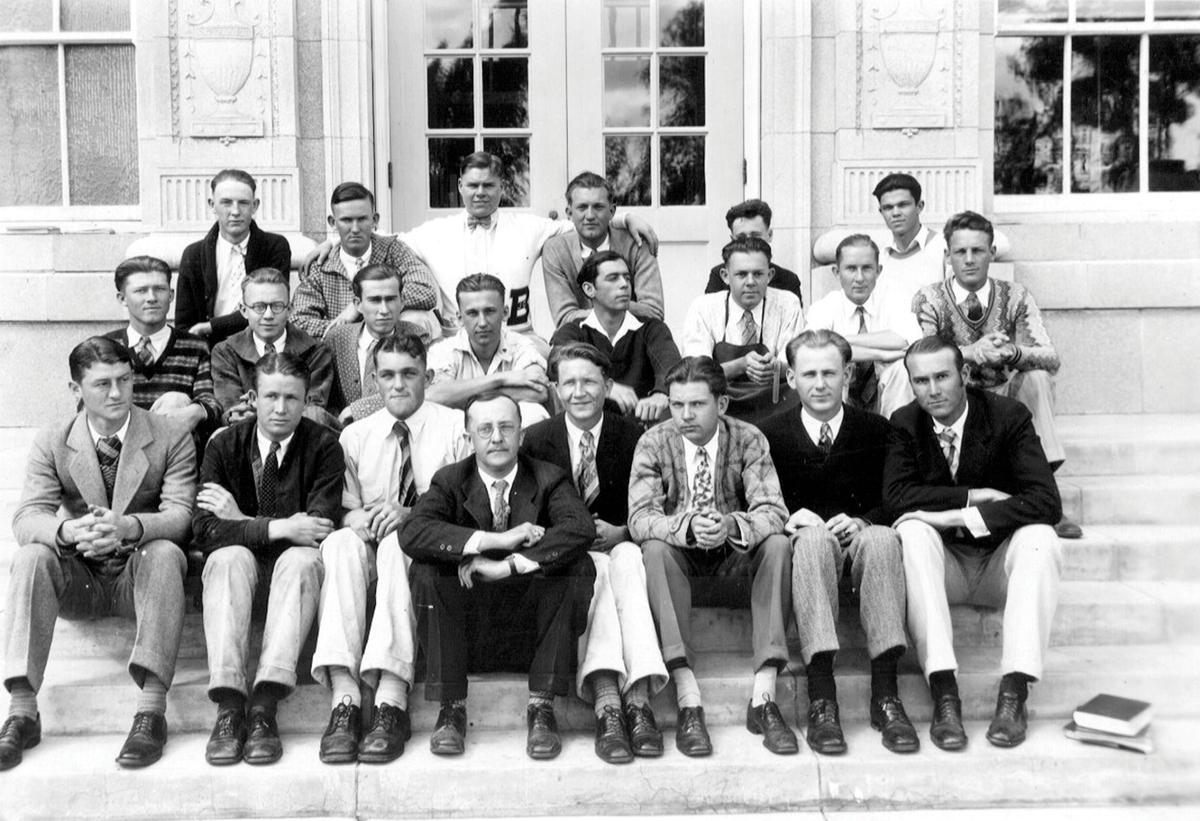 In 1928, Bakersfield Junior College was located on the Kern Union High campus. Here students sit with their teacher. Regina Hulsy, 323-3394 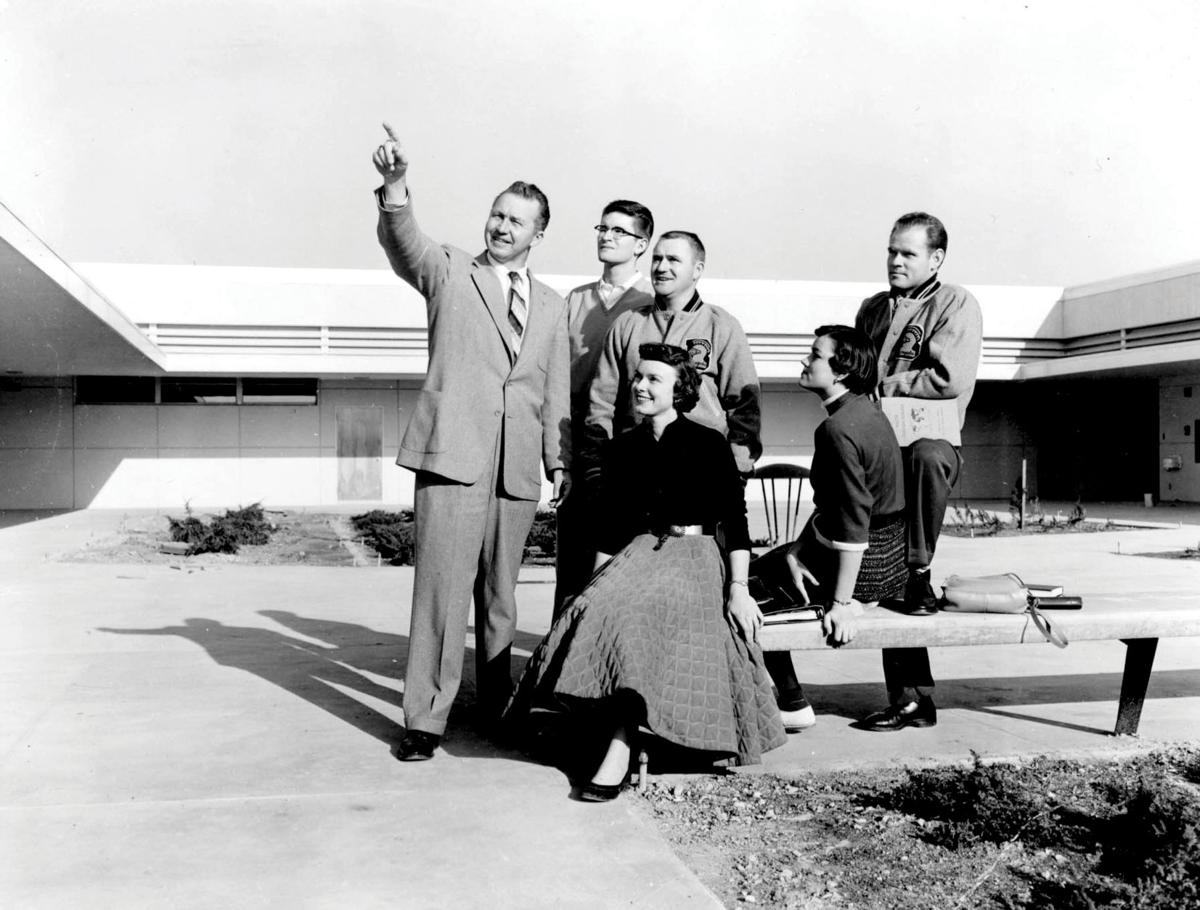 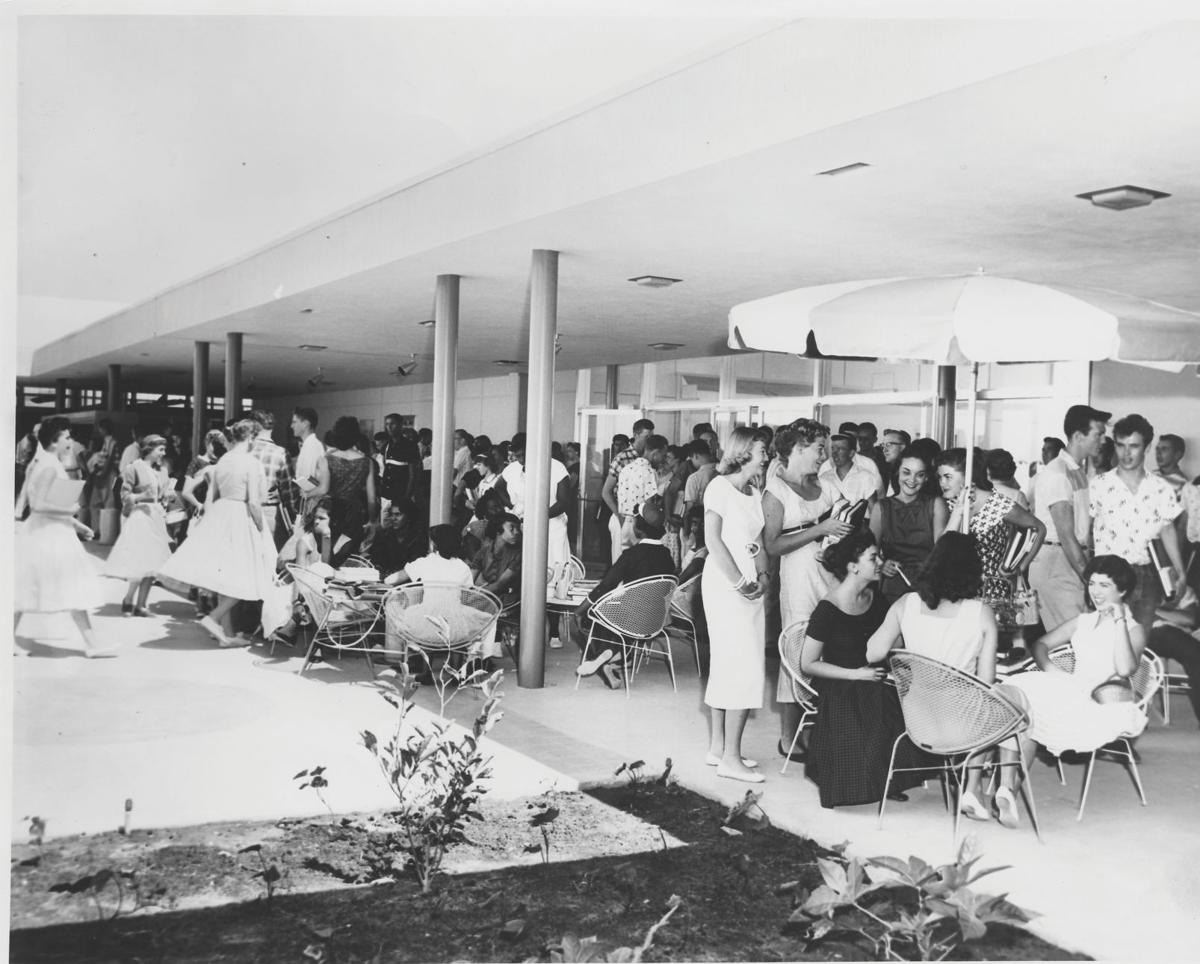 Students enjoy their new campus center at Bakersfield College after its relocation to Panorama Drive in 1956. 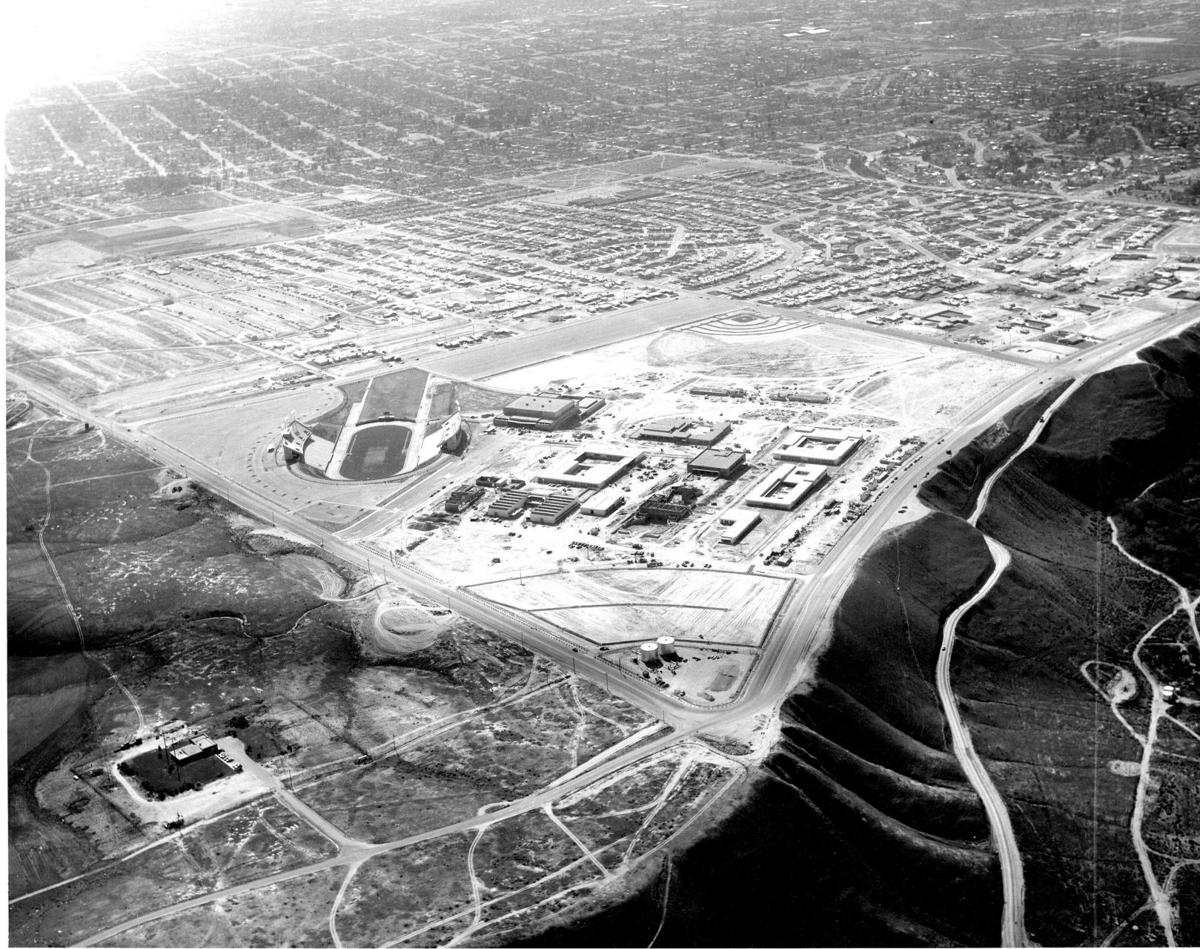 An aerial view taken from northeast of Bakersfield College shows Memorial Stadium and its surrounding area in its infancy in the mid-1950s. 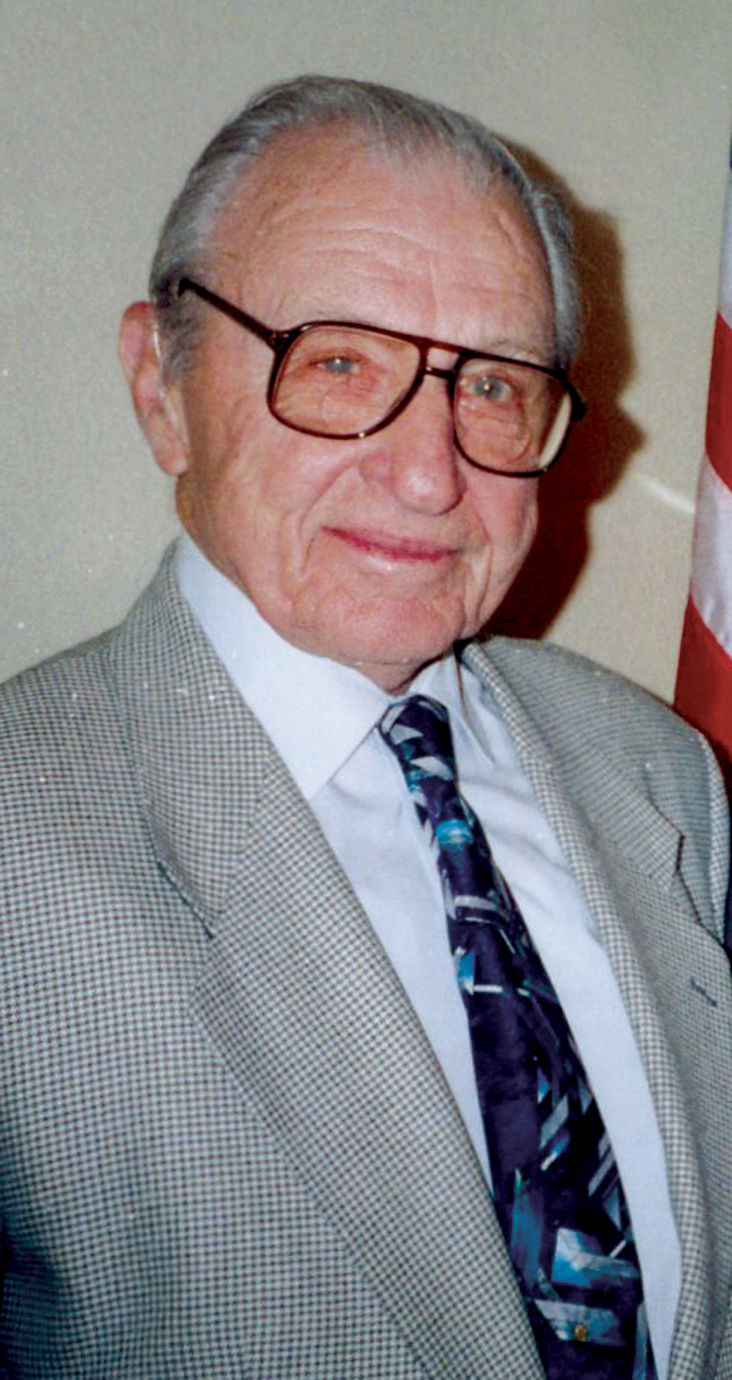 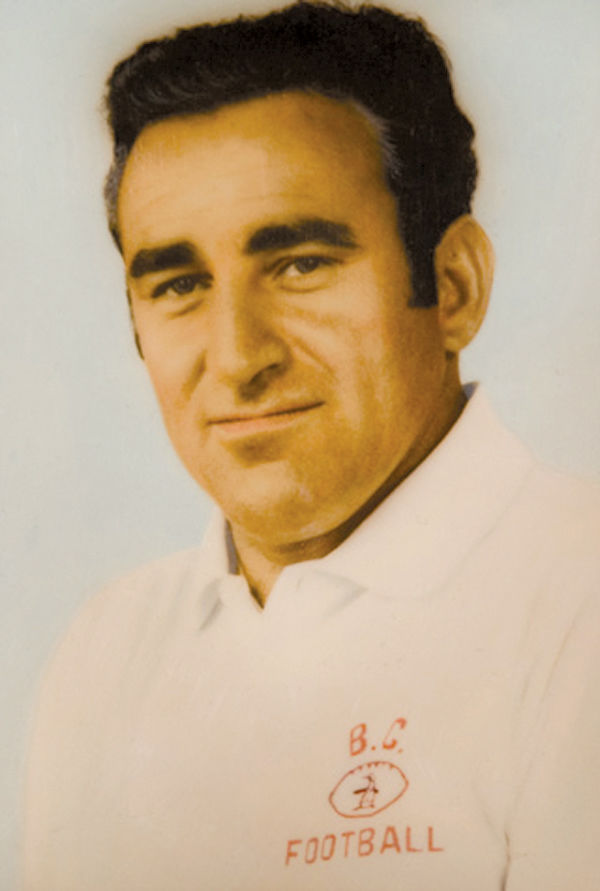 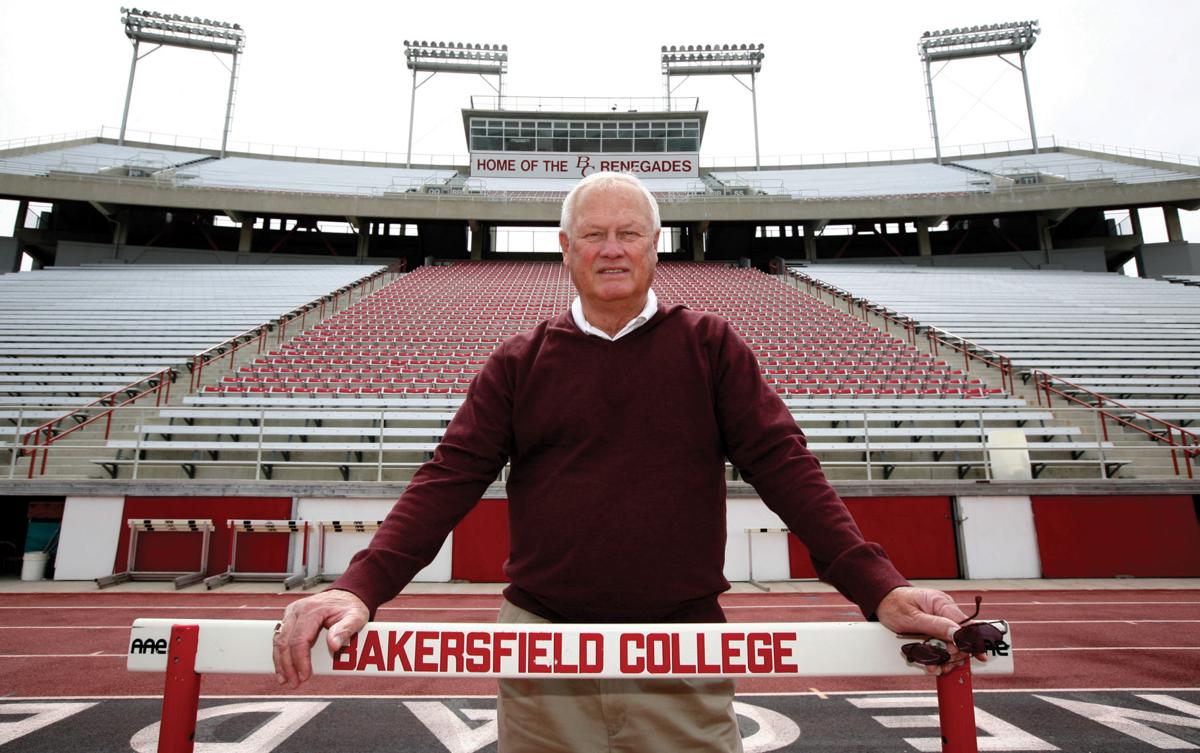 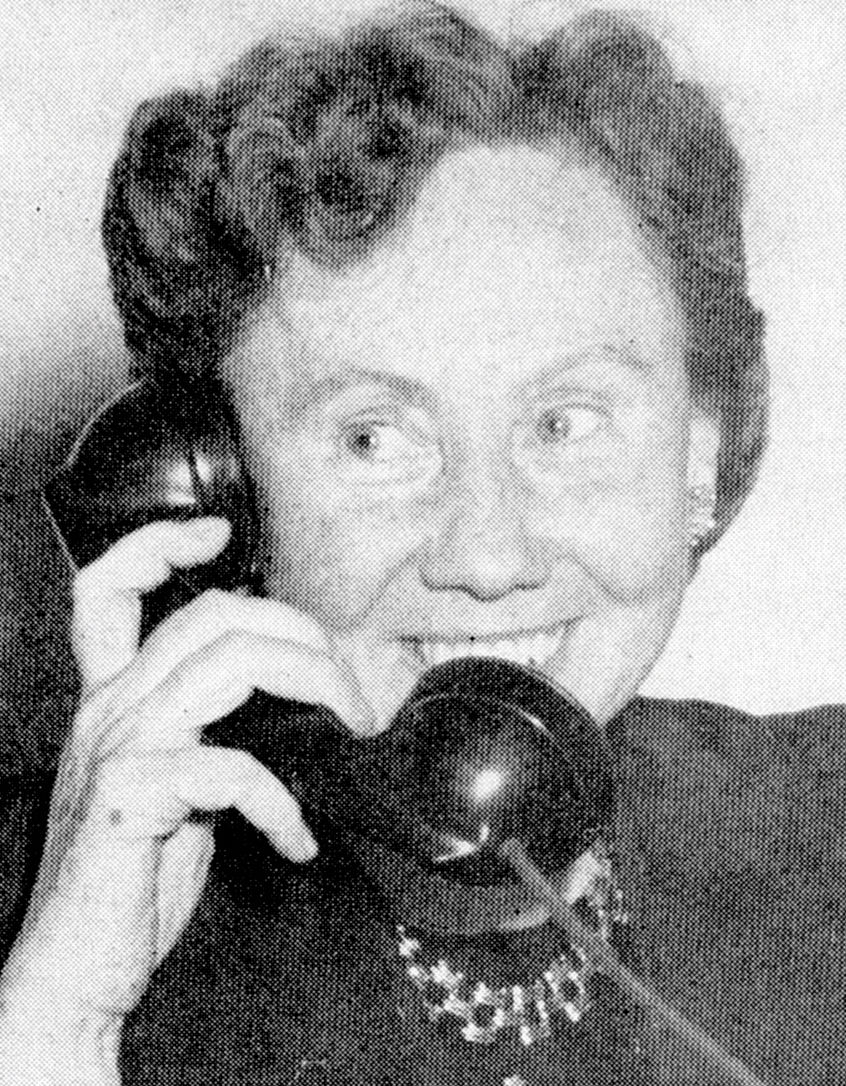 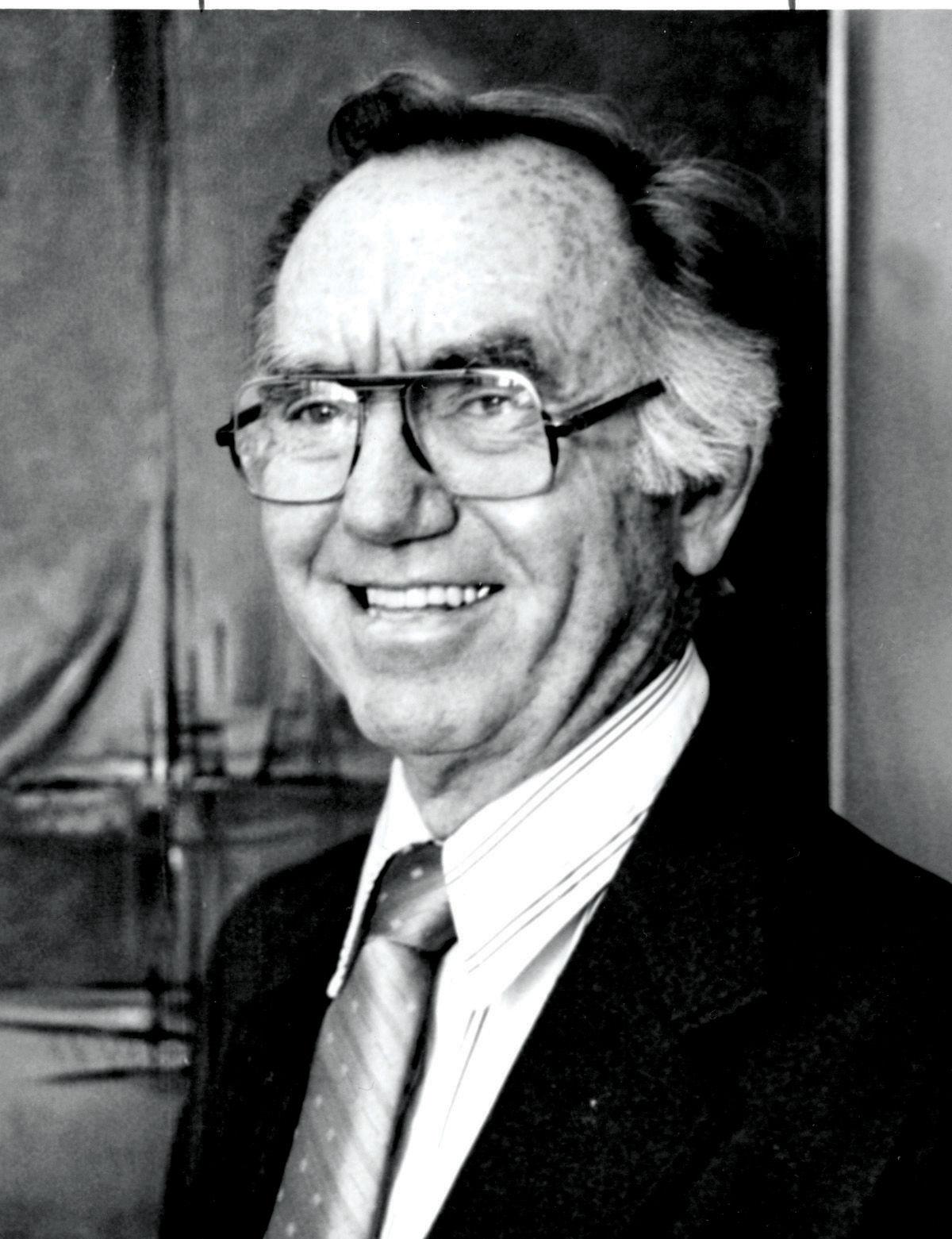 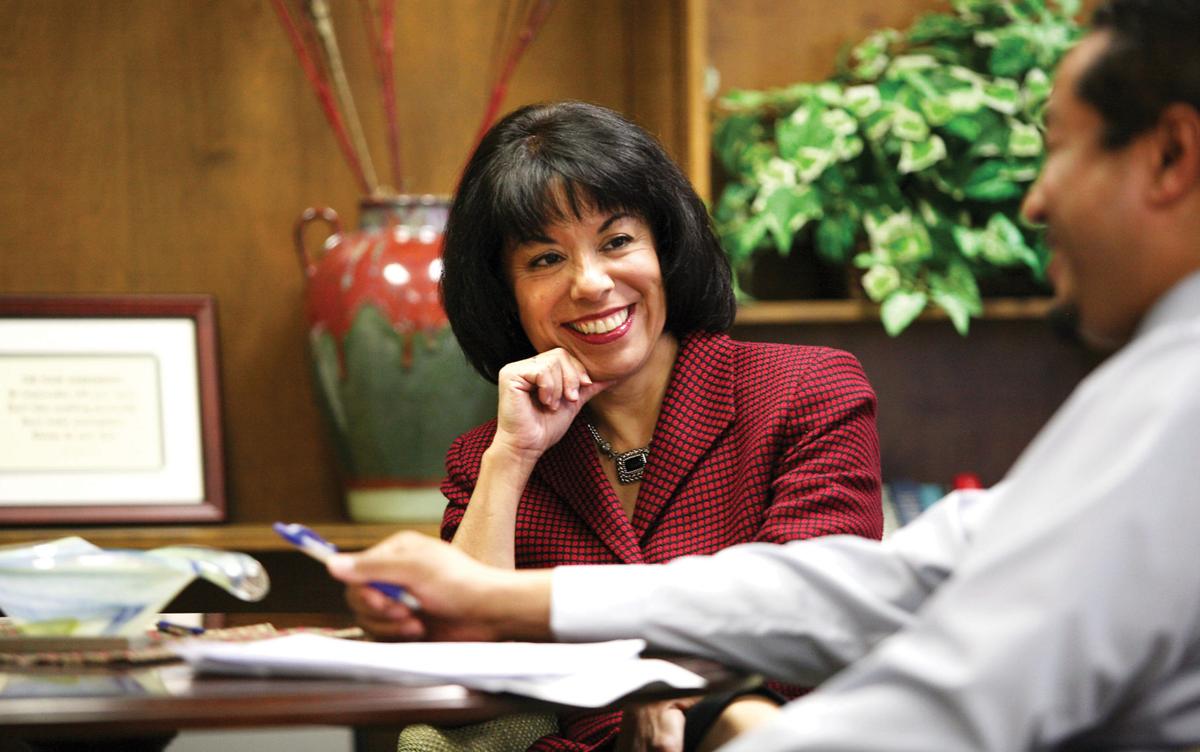 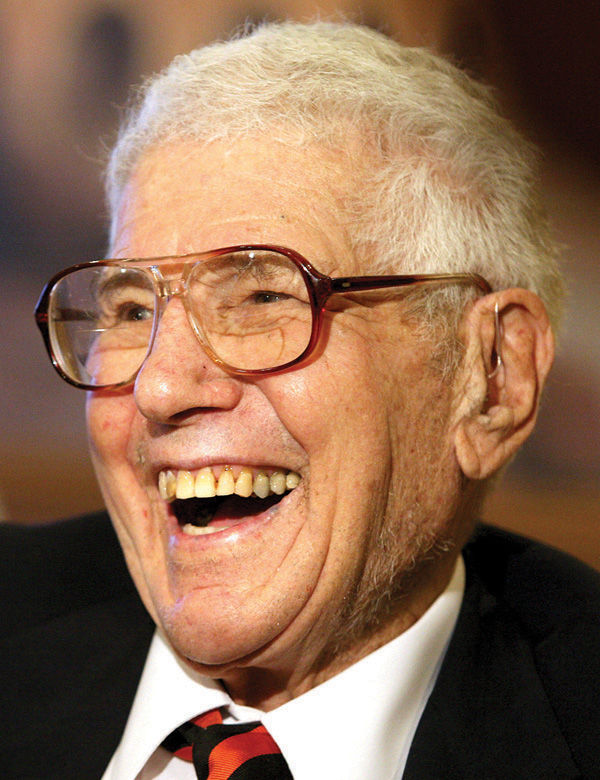 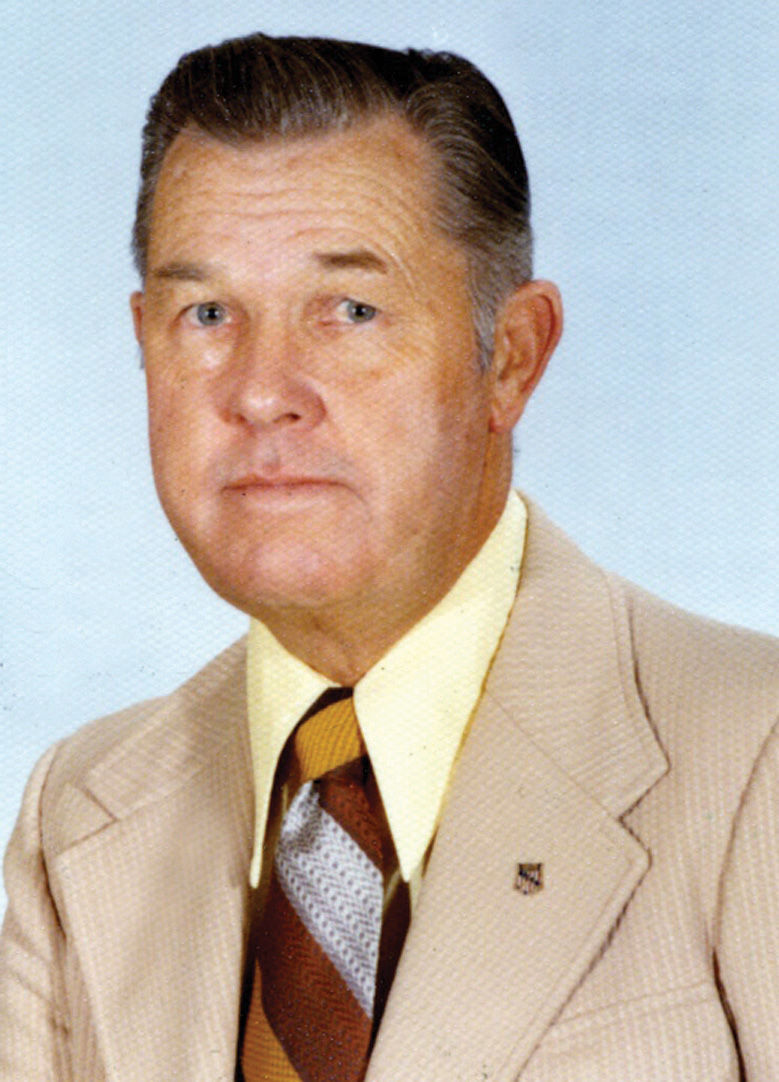 A man walks along the sidewalk on the Bakersfield College campus on a hot summer day.

In 1928, Bakersfield Junior College was located on the Kern Union High campus. Here students sit with their teacher. Regina Hulsy, 323-3394

Students enjoy their new campus center at Bakersfield College after its relocation to Panorama Drive in 1956.

An aerial view taken from northeast of Bakersfield College shows Memorial Stadium and its surrounding area in its infancy in the mid-1950s.

The Bakersfield College "Renegade" nickname is fitting for the campus, considering the many challenges that occurred even before its opening on Sept. 8, 1913 with just 13 students. Here's how it came to be Bakersfield's college.

The birth of BC

* In 1907, Sen. Anthony Caminetti of Amador County sponsored a law that allowed junior college work to be offered within California's high schools, thus laying the groundwork for the opening of junior colleges throughout the state.

* It is unclear when the board of trustees of Kern County High School, now known as Bakersfield High School, approved junior college classes at the school, but it is believed to have occurred sometime in 1910.

The idea of implementing junior college classes was new and met with some skepticism within the board. Dr. B. S. Gowan, Kern County High School's new principle in 1913, and Paul VanderEike, head of the high school's science department as of 1911, worked together to convince the board of the importance of college courses at the school. The first classes were thought of as post-graduate work of the high school ,and were later recognized as a junior college courses in 1915.

* In a 1913 circular printed by The Morning Echo, Gowan explained that the purpose of the college courses were "to provide the first two years of regular four-year college course" and also "enable pupils who have not planned to go away to college to get two extra years of schooling at home." But it wasn't until Aug. 6, 1917 that the board officially recognized the junior college in their minutes.

In 1913, the closest colleges were Stanford University and UC Berkeley. During that year, VanderEike sought out advice from various departments at the University of California in hopes to build a curriculum and solve articulation issues to the university. VanderEike received helpful counsel and also criticism during the process.

* The year of 1915 hosted the first graduate of the junior college division of the Kern High School District, transferring Josephine Chase with junior status to the University of California the following year.

* In 1916, A.J. Ludden replaced Gowan as principal of the high school and VanderEike was appointed as the vice principal and dean of the college by the board.

* In 1921, Grace Bird was appointed dean of the college after VanderEike's leave of absence, and both became the high school's co-vice principals.

Morris Chain, one of the junior college football players and a sports writer for The Morning Echo, referred to their renegade team in an article. The team quickly took on the name, which helped create a new identity for the entire college student body.

* A groundbreaking ceremony was held at the current location on Panorama Drive in 1953. Although the fall 1955 football games were played in Memorial Stadium, classes weren't held on the new campus until the spring of 1956, with a total enrollment of 1,400 students.

Bakersfield College has grown exponentially since then with record-breaking numbers during the 2009-2010 academic year. In that year, there were 19,673 students registered in the fall, 972 graduated with an associate's of arts or science degree, and 735 with a certificate, said Amber Chiang, director of marketing and public relations at Bakersfield College.

Since its inception, BC has developed future leaders of our community, and throughout the nation.

"If you look at the alums of the college, you find a group of amazing people," said Jerry Ludeke, BC director of archives. "It has had a tremendous positive impact in developing really well-educated people with a broad cultural background."

Current BC president Sonya Christian said she believes that the college has a great impact on the community as well.

"Bakersfield College is an engine of economic productivity and personal advancement," she said. "It's a complex organization of employees and experts who help community members earn jobs, start careers and who provide businesses with skilled professionals that grow our economy.... BC graduates over 1,700 individuals every year with a degree of certificate who have started a college career or learned a skill to bring back to the community."

Dean Gay and the Gay Family

In 1936 when Grace Bird offered the possibility of changing Bakersfield College's informal nickname, it was Dean Gay who stood up and said, "We are the Renegades!," ending the discussion as his statement was met with cheers. His son, David Gay, followed as a BC student. Both served on the Bakersfield College Foundation's board of directors. Dean and his wife, Adah, were active in the BC Alumni Association and have supported the college generously. The Gay family's contributions can be seen all over the campus.

The "Renegade" name and mascot, the "dark knight," were officially adopted in June in honor of the centennial.

Collis has been a successful coach of BC's football and baseball teams, and was honored with the naming of Collis Field after him. Collis has been an avid, effective cheerleader and fundraiser for the college's athletics. Known for his humor and great stories, he often is asked to speak at college and community events, even after retirement.

Covey is known for his track and field alumni award dinners, where he provided a booklet of information including scores, standings, individuals highlights and even of other sports that don't typically get as much recognition. He has taken on the task of compiling a history of BC sports to be released during the centennial year.

In 1921, Grace Bird became the dean of the college replacing Paul VanderEike, making her the first woman to head a public community college in the state. Bird remained in her position until 1950 when she left for a position with UC Berkeley. She was responsible for developing BC from a start-up school of less than 50 students to more than 1,300 with a greatly admired academic and cultural program.

Before becoming president, Collins started the first cross country team for BC and became the school's fourth head track coach in 1956. Collins was made director of student activities in 1958 and later named dean of students in 1961. He left BC briefly to serve as president at another college, but returned in 1972 to serve as president for the next 11 years. After retiring from presidency, he became a consultant for the Kern Community College District and was instrumental in forming the Bakersfield College Foundation and the Bakersfield College Archives.

Sandra Serrano is a Hastings College of the Law graduate who came to BC in 1990 to serve as associate dean of students, and later the vice president of student services. In 1998, she became the first Hispanic and the second woman to become president of the college. In 2004, she became the chancellor of the KCCD, which oversees three colleges.

Although he had no formal connection to BC, Levan was made aware of the school's fine standards through his close friend, John Collins. His gifts to the college total $20 million, the largest donations ever given to a community college in U.S. history. His donations have been used to create scholarships, the Norman Levan Center for Humanities, and the Norman Levan Institute for Lifelong Learning.

John Oglesby was a .400 hitter for the Renegades in the late 1940s. He returned to the college to head the Agriculture Department. He and his students built and placed the large "BC" logo behind the end zone in Memorial Stadium. Oglesby also started a farm equipment show that eventually developed into the Tulare Farm Show. The cypress trees by the agriculture building were grown from seedlings from his ancestral Mississippi plantation.

Harvey Hall, Bakersfield's longtime mayor, is one example of a BC alumnus who has gone on to become a productive worker and leader in Kern County and the city of Bakersfield. He has created his own business, proved himself as a community leader, served on the KCCD board of trustees, and is a faithful booster of the college.

Gil Bishop is a charter member of the Bob Elias Hall of Fame, a leader, academician, athlete and musician. He came to BC from East High School in 1953 as a basketball coach, and later became the athletic director and chair of the Physical Education Department. From there, he became the director of public information and then the district assistant chancellor. He is regarded as one of the most influential athletic leaders in the history of the college, and served as an active official in national and international athletic competitions. He was also the assistant team manager of the USA track and field team at the 1976 Olympics.

Where: Fireside Room at BC

Birthday cake -- baked and decorated by BC Culinary Arts students -- and punch for all BC staff following the fall 2013 semester opening day activities.

Barbecue and birthday cake will be served for the Delano community. Details: hcalip@bakersfieldcollege.edu.

This formal event will celebrate BC's centennial anniversary with exhibits and displays of history, live music, and fine dining catered by the BC Culinary Arts program.

Where: John Collins Campus Center at BC

The event recognizes outstanding BC alumni. Nominations are being accepted for three to four inductees into the Bakersfield College Alumni Association Hall of Fame. More information: bwhitson@bakersfieldcollege.edu.

Celebrate the centennial class of 2014 with a reception honoring their academic achievement. This event is sponsored by the Bakersfield College Foundation. More information: mstepano@bakersfieldcollege.edu.