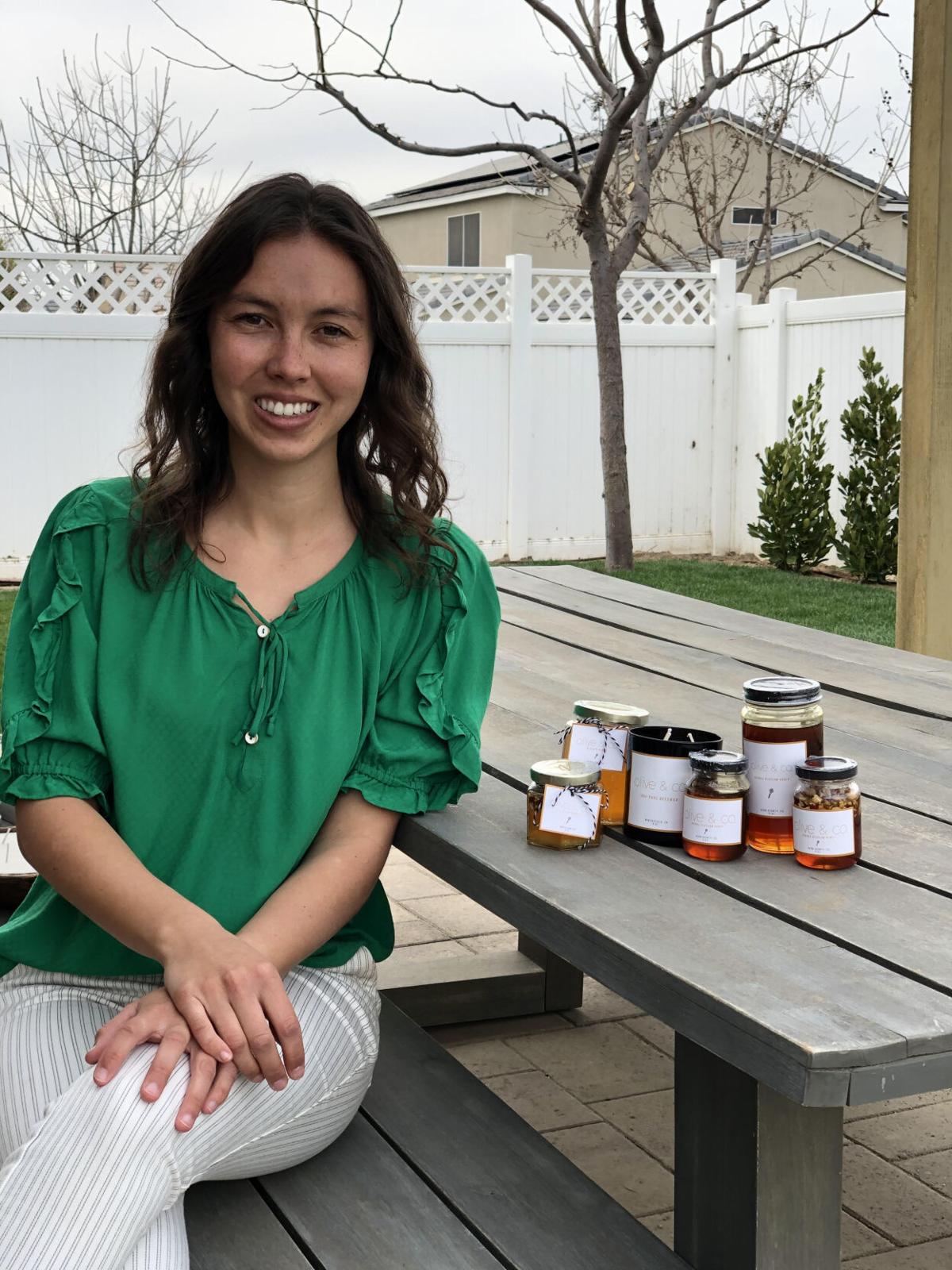 Olive & Co. founder Madison Anderholt shows off honey that is available for purchase on her website. 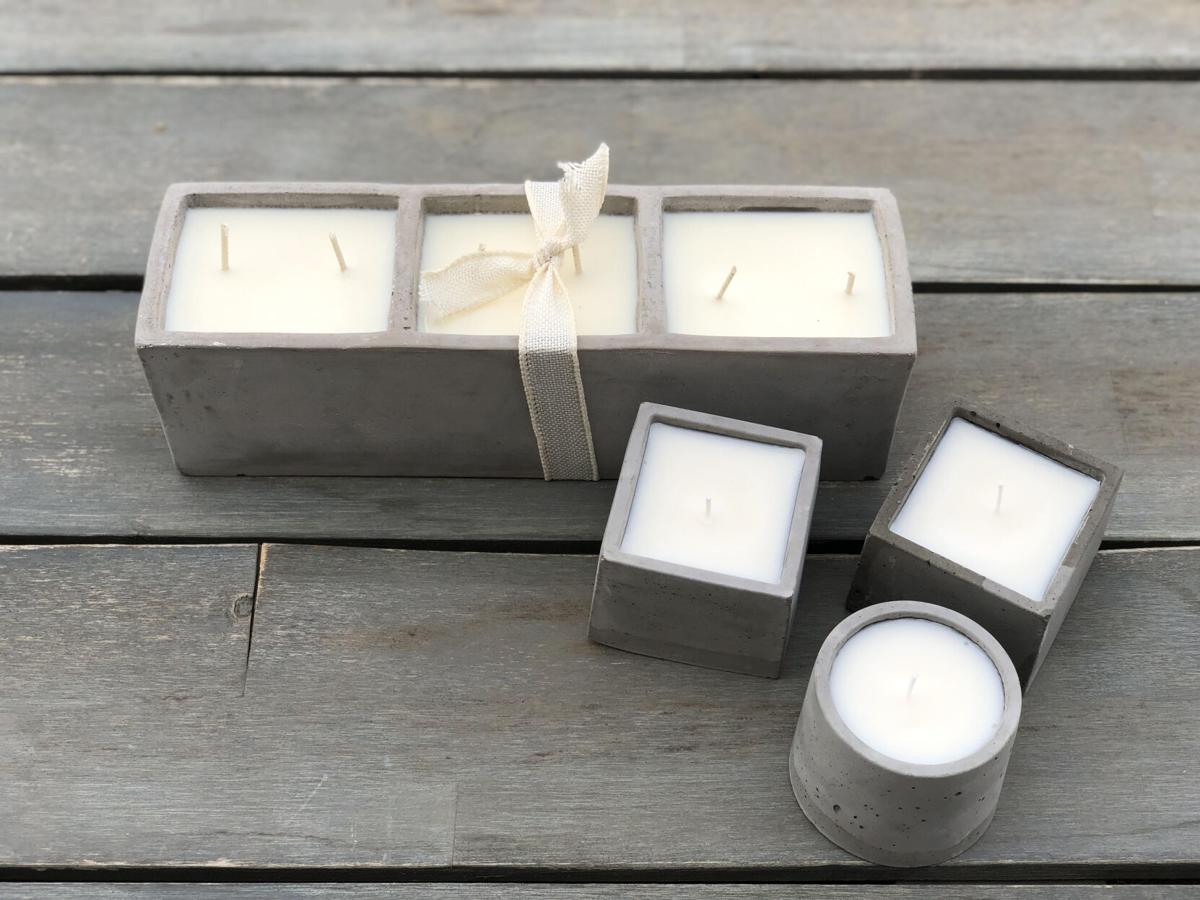 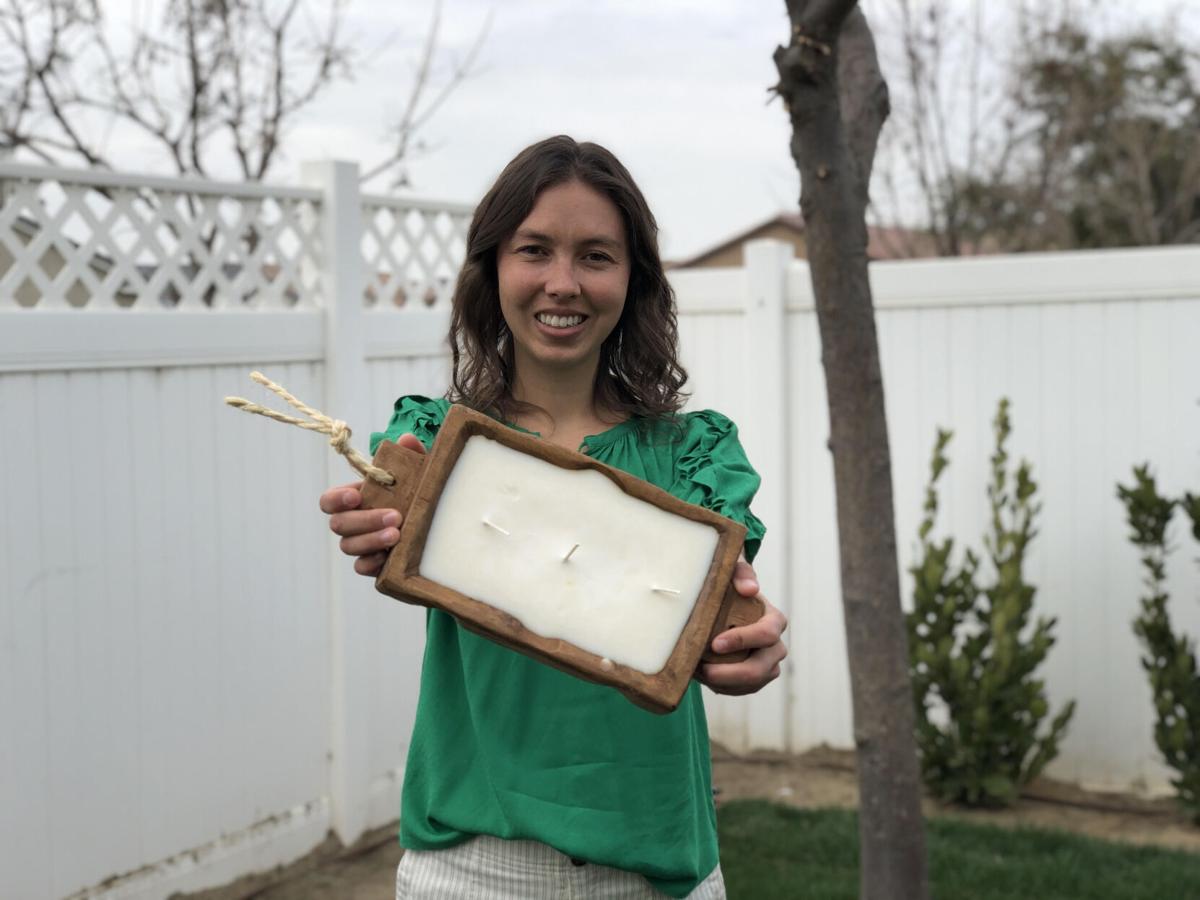 Olive & Co. founder Madison Anderholt shows off one of the dough bowls she has available. 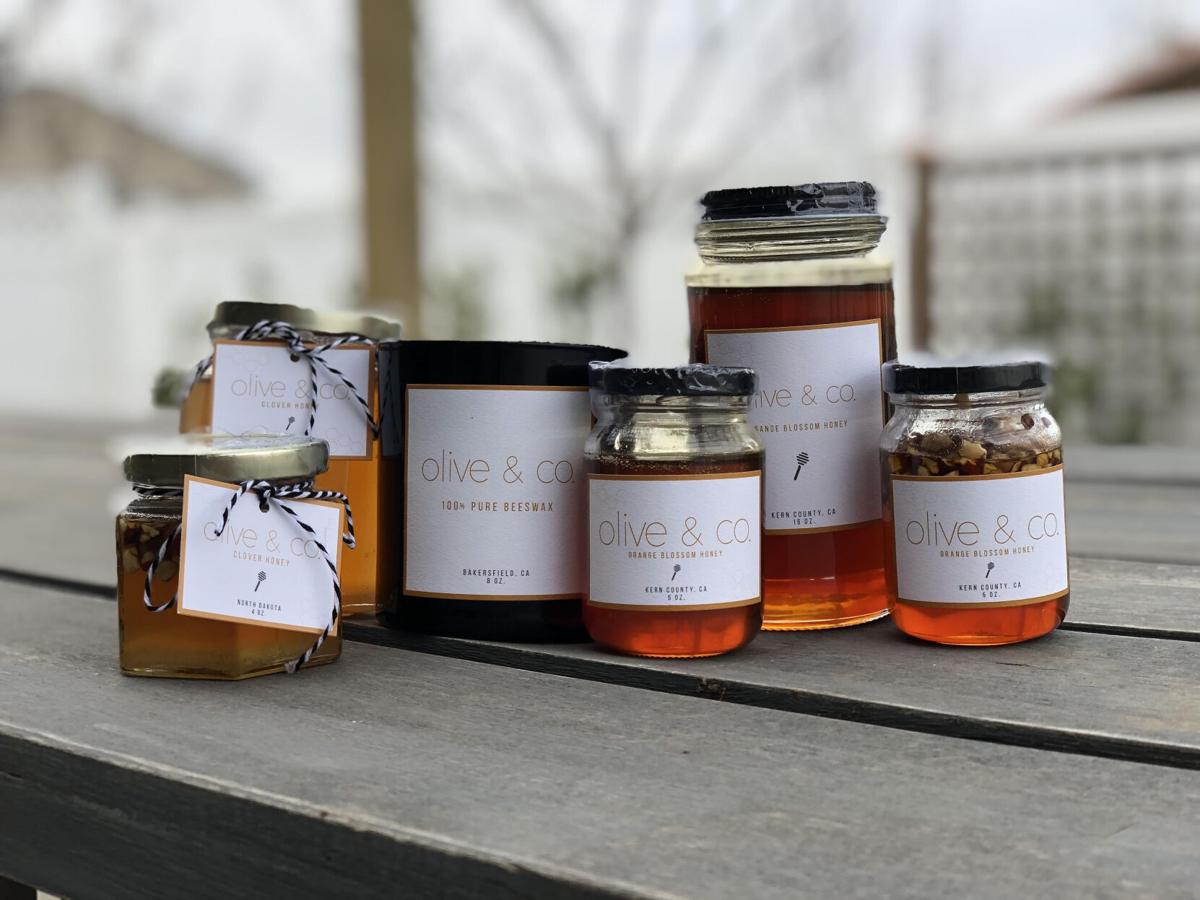 Other than candle, Olive & Co. has two types of honey available for purchase. 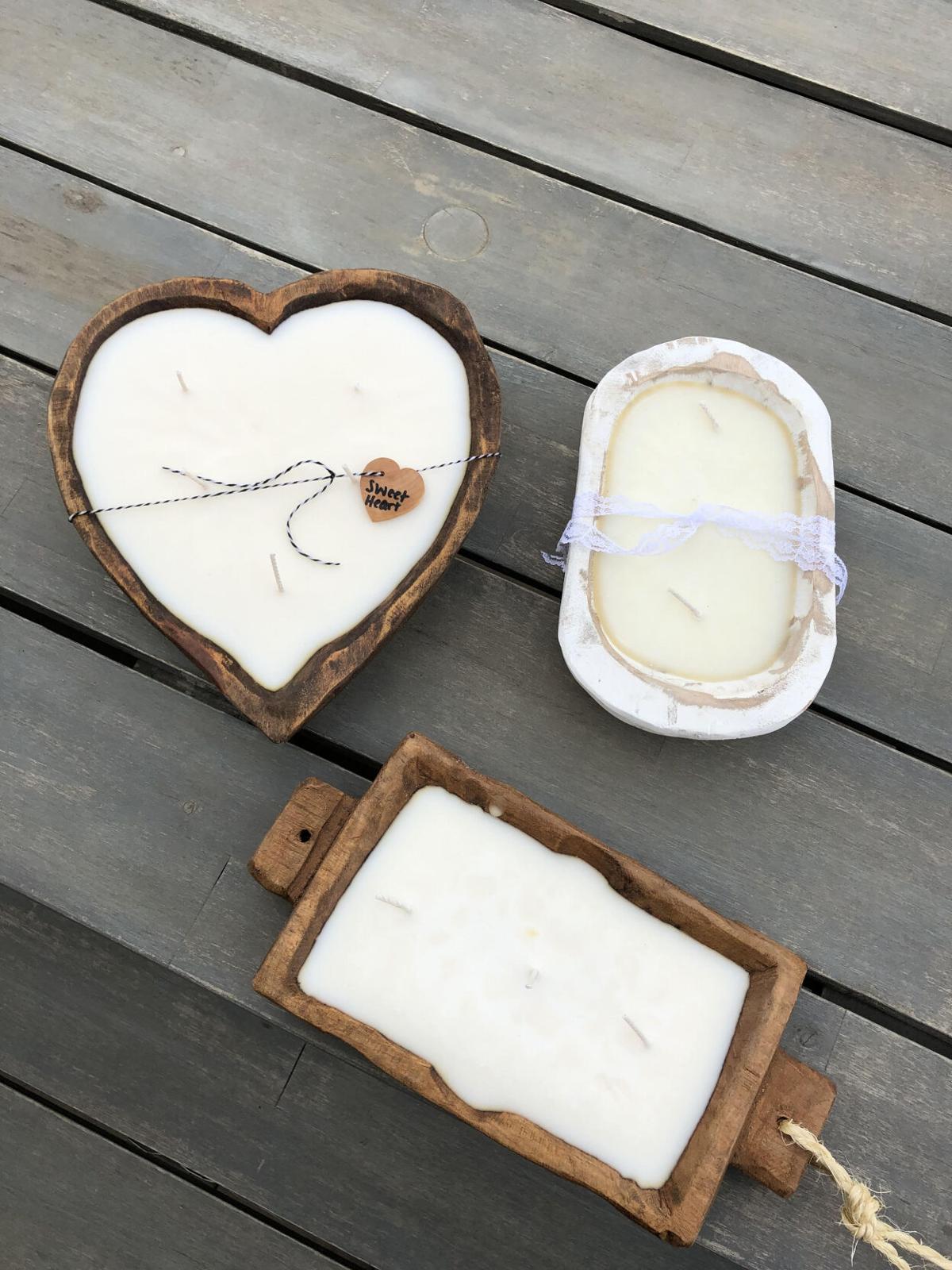 Dough bowls are available in a variety of shapes, sizes and colors.

Olive & Co. founder Madison Anderholt shows off honey that is available for purchase on her website.

Olive & Co. founder Madison Anderholt shows off one of the dough bowls she has available.

Other than candle, Olive & Co. has two types of honey available for purchase.

Dough bowls are available in a variety of shapes, sizes and colors.

When Madison Anderholt decided to give candle making a try last January, she had no idea where the journey would lead her — mainly because the first candle she made was a little bit of a "disaster."

There’s a lot that goes into the process that she never considered before: how to properly melt wax, how much fragrance oils to add, how to slowly pour the melted wax.

But through determination, and steady hands, a new hobby quickly manifested itself into a small business: Olive & Co.

In a year’s time, she’s gotten people’s attention locally — her candles can be found in several stores — and nationally. People from Illinois, New York and other states are buying her products.

“It’s flattering and it’s awesome to see people everywhere across the U.S. be interested,” she said. “I do a little happy dance anytime that happens.”

In January 2020, Anderholt, who is a full-time teacher and intervention coordinator, decided to give candle making a try. As a fan of baking, self-care hobbies, math and science, all of that tied into making candles. So one weekend, after gathering a bunch of supplies off of Amazon and perfumes, she gave it a go — and quickly saw it wasn’t as easy a task as she thought.

But the complexities behind the process and its therapeutic nature intrigued her. Sure, the first candle wasn’t the best, Anderholt said, but the coming months involved learning more about different waxes, trimming wicks, creating scents and operating a business with her husband, Dylan Wilson, out of their two spare bedrooms.

The name Olive & Co. refers to Anderholt’s best friend, Olive, a black and white shih tzu that came into her life when she was 13 years old. For years they were an unstoppable duo, but in 2014, they both got sick. Anderholt recovered quickly, but Olive was getting much worse.

On Dec. 14, 2014, Olive passed away, and Madison always told herself she would name something after Olive. What better way to honor her memory than putting her name on a beloved product, Anderholt thought.

“That was the goal, to find something that her name could represent joy to other people because she was so joyful as a dog, and I wanted to represent that in the best way possible,” she said.

After getting the hang of candle making — “we’re still learning,” Anderholt said, and there’s a bit of trial and error from time to time — she released her first candles line in late February 2020. Since then, a number of local stores, such as Bratcher Home & Design, Archer the Storefront and Redhouse Beef, sell Olive & Co. products, and Anderholt and Wilson have been introducing new scents, waxes and products.

Olive & Co. candles come in a variety of scents, such as blood orange, sea salt and orchid, coconut lime, golden rose and other seasonal ones. Wilson explained the pair blends scents from bases provided by suppliers. One combination — grapefruit, mint, cucumber and melon — will be available this spring.

Some candles come in unique holders, such as dough bowls, which are hand carved, made from raw wood and from Mexico. They come in a number of shapes and colors, and once the candle is all used up, the bowl itself can be used for other decorative purposes. Anderholt’s mother also created concrete jars.

After some time, beeswax candles were introduced to the lineup. That allowed the couple to learn how it differs from soy wax and its health benefits. But first, they had to learn how to actually work with a 15-pound block of pure beeswax.

“How do I melt this? What do I do with this block?” Anderholt remembers asking herself.

“I tried shaving it, cutting it, throwing it on the ground. I used a pick and I just beat it as hard as I could... that was the only way to break it up into chunks and melt it down,” Wilson added.

Orange blossom (from the Central Valley) and clover (from North Dakota) honey is also available for sale, and some jars even come with almonds on top.

With a fruitful first year, Anderholt and Wilson hope one day to have a store of their own. But for now, they’re taking the process step-by-step, and even introducing others into their candle world. Olive & Co. offers candle making classes which provide everything one needs to create an 8-ounce soy wax candle. Classes are held in-person and limited to six people.

To learn more about Olive & Co., find the company on Facebook and Instagram @olivecocandles or visit https://oliveandcocandles.com/