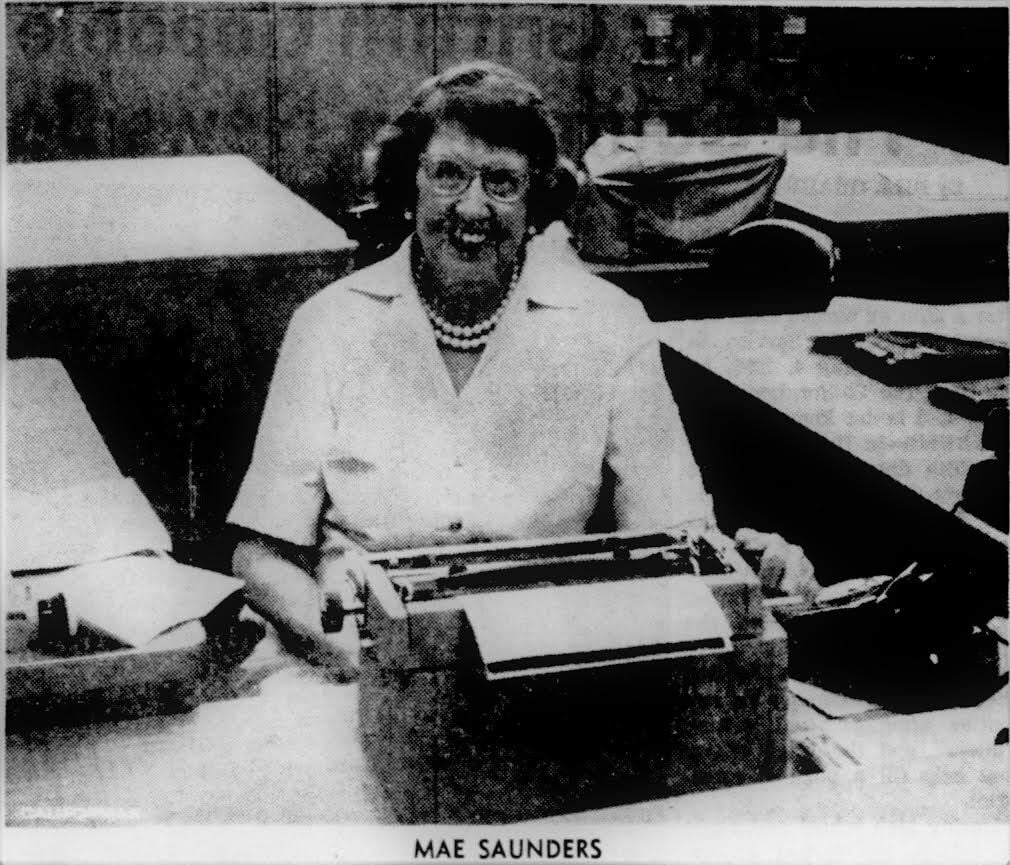 If there was one thing that Mae Saunders was sure about, it was her desire to be a part of the staff of The Bakersfield Californian. She devoted 46 years of her life and career to a paper that she loved. She stated in an interview with Barbara Waterhouse on Aug. 20, 1966, “My newspaper career has been rewarding because it has been with the newspaper which believed in community service and lent its support to many worthwhile endeavors in all fields.”

Saunders started her journey in journalism while still a student at Kern County Union High School. While there she worked on the staffs of the school newspaper and the yearbook. Like many other young reporters, she paid her dues working as a stringer. In the days before our modern technology, a stringer was a reporter who was paid by the column inch. Clippings and pastings of a story were put in a “string” that the editor measured.

It did not take long for her to secure a staff position with the paper as she was hired just before she graduated in 1922 and her first byline appeared on May 31, 1922. On June 3, 1922, she earned her first front page story for the evening edition of The Californian which proclaimed, “Largest Class in History of Local High School Gets Diplomas.” She was offered the role of woman’s editor via telegram the day she graduated from Berkeley in May 1927 and her local beats included community clubs, schools, libraries, interviews, features and reviews of movies, community theater and concerts.

She was also focused on providing readers with the stories of the people who mattered most – the everyday citizens of Bakersfield. During World War II, Saunders started a regular column in The Californian titled “Sharing Between the Shears.” As she explained in her Jan. 25, 1941, column, some friends debated the meaning of the title and came to the conclusion that “It means that the column is for items that get cut out from news stories, the leftover choice bits about this and that,” to which Saunders confirms, “That, folks, is it!”

She used the column to share letters and personal stories submitted by readers well as stories about the strength and determination of the women holding down the homefront. This continued through the years on other women’s issues as well. On Jan. 15, 1945, she wrote, “women are taking a step forward as they feel themselves responsible as citizens…establishing their rights…becoming self-reliant and courageous spiritually to meet the future, whatever it may be.”

She was a mentor to many and left behind a journalism legacy that has continued to assist other women in ways she could never have imagined. Her last story appeared on Feb. 20, 1967, about developer Henry J. Brandt, and aptly for this reporter of Bakersfield’s local history, she served as one of my most valuable sources for a story written about him almost 50 years later in this very magazine.