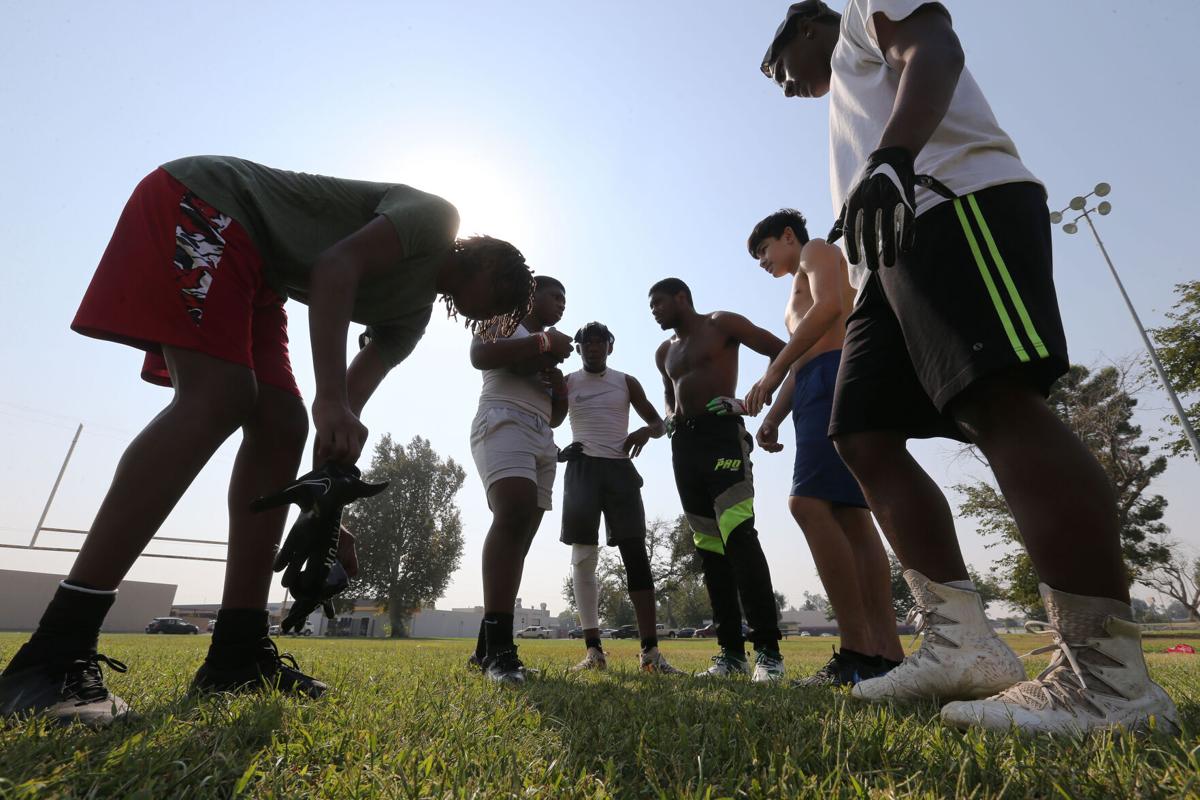 Daniel Bradwell, Harmonee Pack, Tyrone Cooper, Yriel McGee, Johnathan Bradwell and Willie Rainey huddle up to discuss an offensive play while practicing their football skills at Beach Park on Oct. 1. The team was preparing for a 7-on-7 football tournament. 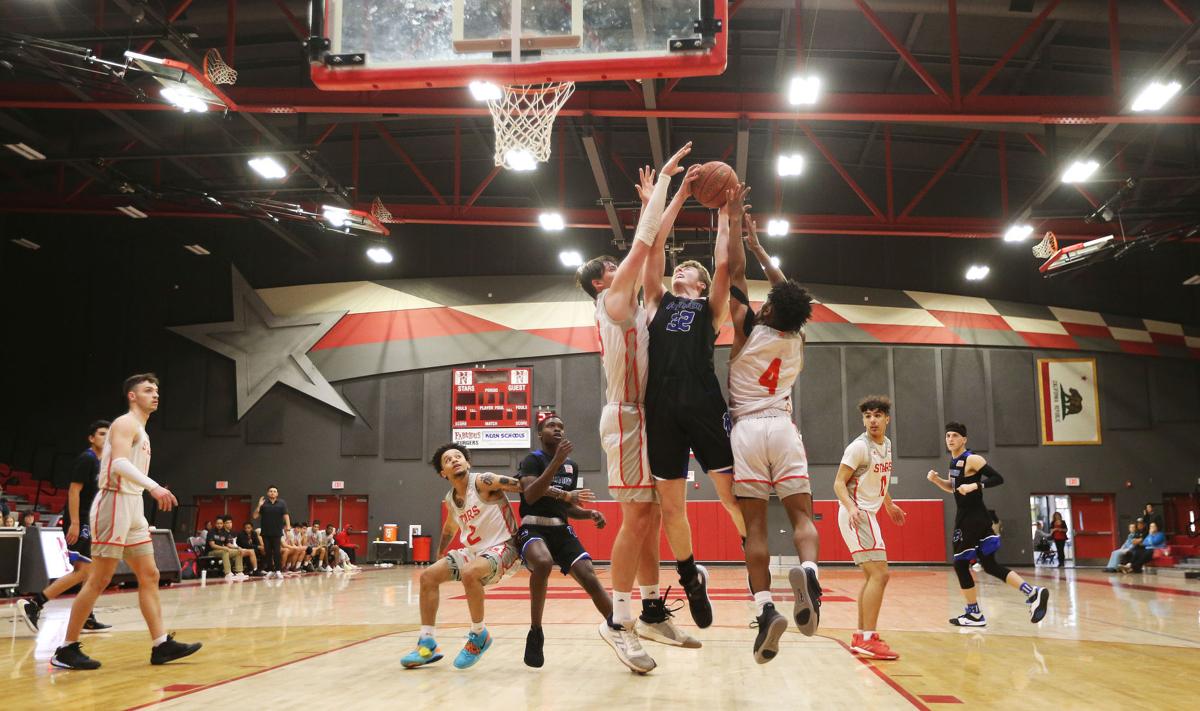 Frontier's Lucas Murray scores under the basket against a host of North defenders in February. 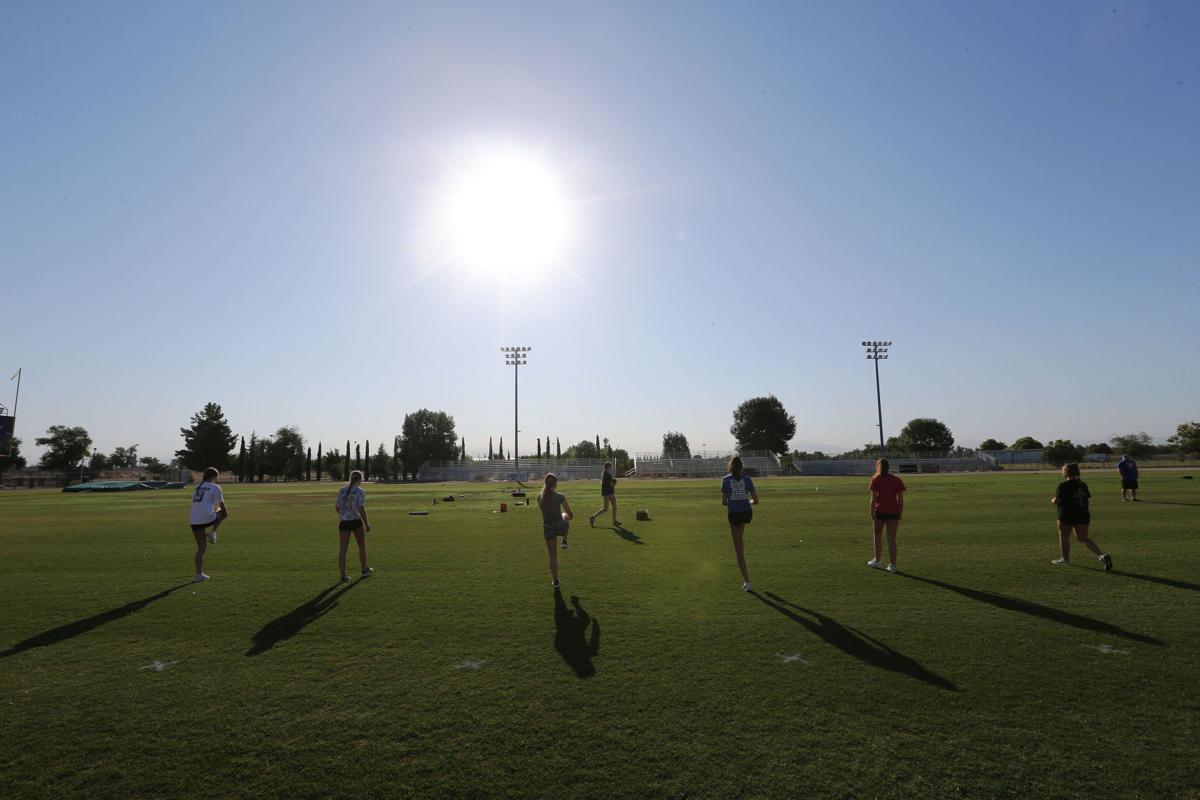 The Bakersfield Christian volleyball team participates in a workout June 26 on the BCHS football field.

Daniel Bradwell, Harmonee Pack, Tyrone Cooper, Yriel McGee, Johnathan Bradwell and Willie Rainey huddle up to discuss an offensive play while practicing their football skills at Beach Park on Oct. 1. The team was preparing for a 7-on-7 football tournament.

Frontier's Lucas Murray scores under the basket against a host of North defenders in February.

The Bakersfield Christian volleyball team participates in a workout June 26 on the BCHS football field.

Normally spending hours out on the football field, guiding his team on what plays to make and how to secure a victory for the Blades, these days he's dreaming about doing just that.

"The tough part is I used to coach and teach in Missouri and they’re competing and playing," Tittlemier said. "It’s a punch in the stomach really."

They say you don't know what you have until it's gone, and if 2020 has proven anything, it's that the things we take most for granted are the ones that can leave us at any point.

Take local high school sports, for example. No one could have ever imagined a year without weekly football games, daily practices or various tournaments.

But more than just being an outlet for students to stay active and away from screens, what many did not expect was the emotional and mental toll it would take on so many individuals.

"A lot of students really look to sports for structure and consistency and sense of belonging," said A.J. Shearon, athletic director and boys basketball coach at North High School. "When those things are not available, it impacts and hurts our kids."

Since mid-March, when local school districts announced schools would be moving to a virtual setting, student-athletes have had to adjust to a world where the days of being around teammates and competing were unavailable for some time.

Earlier this summer, the California Interscholastic Federation determined that athletics for the 2020-2021 school year will begin with a modified schedule. It is anticipated that most section start dates will begin in December or January 2021.

For many, the news has fallen on them hard.

Shearon said athletes have been shot or fallen into serious legal trouble in recent months. Many have also been communicating with him, asking when they can get back in the gym, court and field.

"We can only do so much from a Zoom call and conversation," he said. "These (student-athletes), they’re spending 14 to 15 hours at school a day, Monday through Friday. To lose that safe space and outlet, it’s hard."

Not only has time away from sports been difficult on students, but coaches, too, want to get back in the game.

"It makes it harder in California when you have other states competing in high school sports and we’re sitting back here looking," he said.

With his student-athletes at BC, Clark said he has been doing Zoom meetings with them and posting workouts to keep them active. At times, he has been able to meet with a small cohort on campus outdoors. Students stay 6 feet or farther apart, as guidelines state. His girls wrestling team, on the other hand, has been working out on its own.

The feeling of wanting to be out and about with athletes also hits hard at home for Clark. His son and three daughters are involved in athletics and other activities, and they have been wondering, just like others, when they can reunite with their coaches, teammates and peers.

"I want things back to normal," Clark said. "I have kids asking me every day, 'Are we going to be back in school finally? Is this going to last the whole year?'"

There are some ways coaches have been able to reintroduce a bit of "normalcy" into their students' lives. Tittlemier has weekly meetings with his football team and goes over plays, formation recognition, terminology and other basics so that when students are able to have practices again, they already have an understanding of what's expected of them.

"Something's better than nothing," he said. "We’re able to get the mental aspect addressed and embedded in their heads. Those things are so important. If they weren’t aware of them when we returned, they’d be even more behind."

The biggest challenges his students are facing, he noted, is lack of equipment to utilize for workouts. Most have to rely on pushups and situps, which doesn't strengthen them as much as school machines do. When they return, Tittlemier said the team will have to "take it slow" so that no one gets hurt after several months away from vigorous activity.

Tittlemier added many of his students have found jobs during the pandemic in order to help out their families. That might lead to fewer students on football teams throughout Kern County, but he said he will support whatever path his students choose to go on.

Coaches do have a silver lining in these confusing time, however. The Kern High School District Board of Trustees voted to approve allowing outdoor athletic conditioning, beginning Oct. 26. Conditioning will be held outdoors and cohorts will consist of no more than 16 youth and adults.

With much time away, Tittlemier believes students will enter this sports season with a different mindset.

"Sometimes the season is a grind and kids get burned out, but I think it's made them a bit more hungrier being away," he said. "They realized that they do miss those things and it brings them joy and happiness ... This is eventually going to come to an end and we’ll be able to come out there and it teaches them a lesson to not take things for granted."