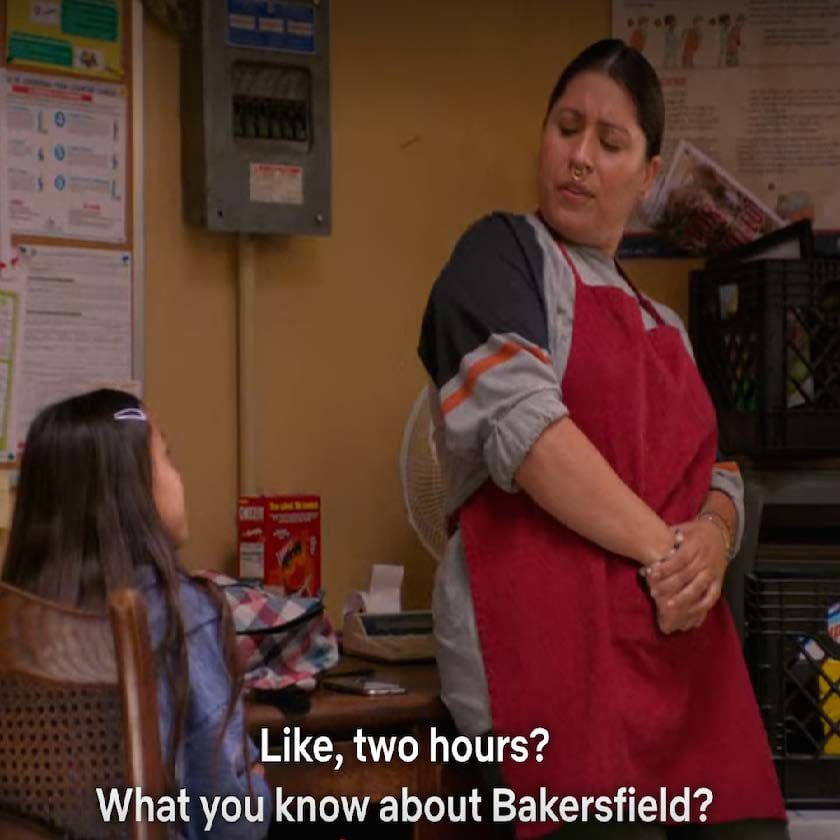 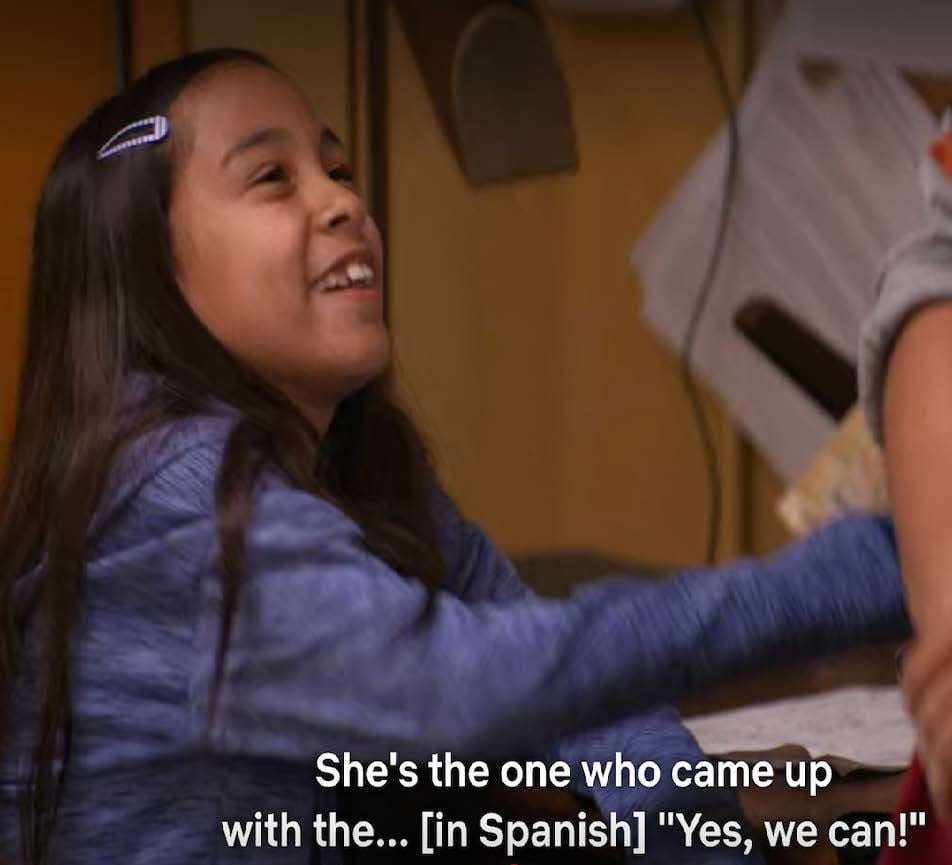 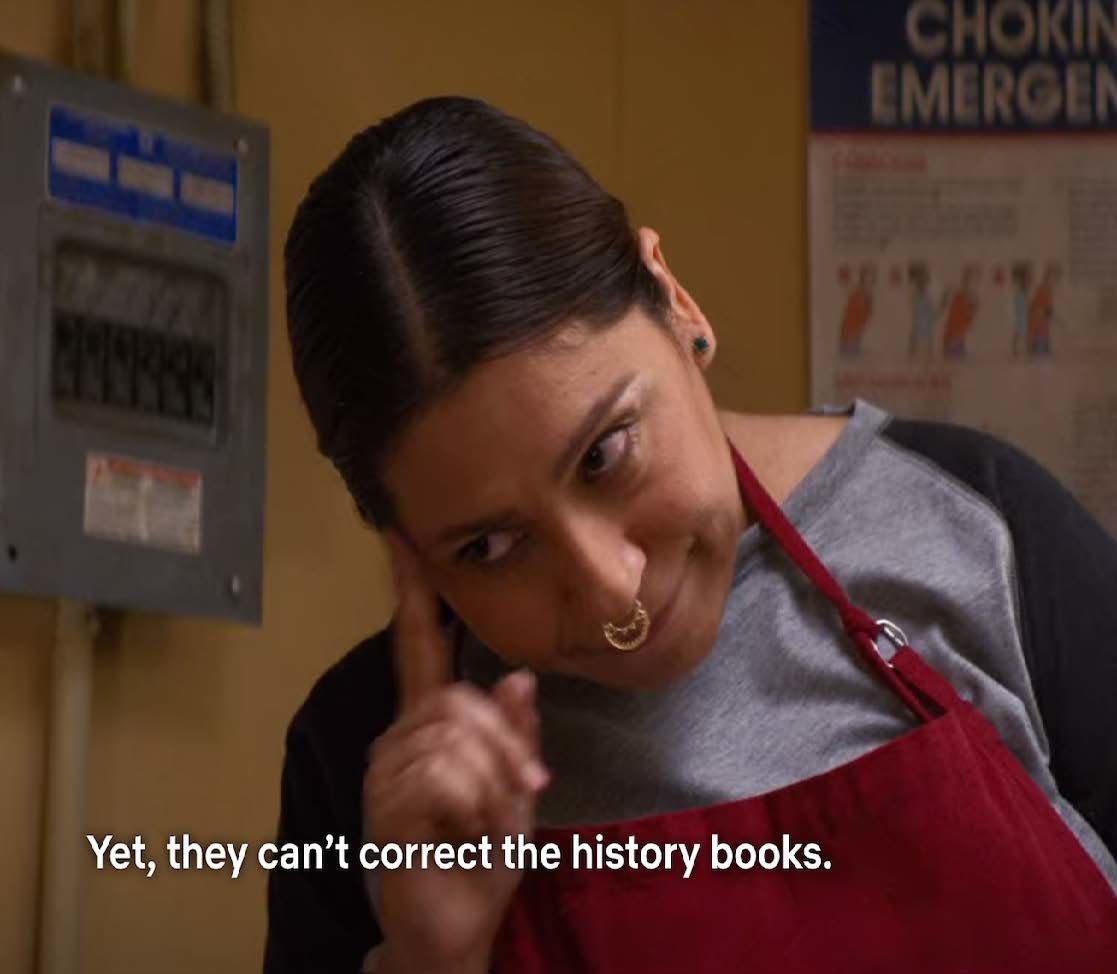 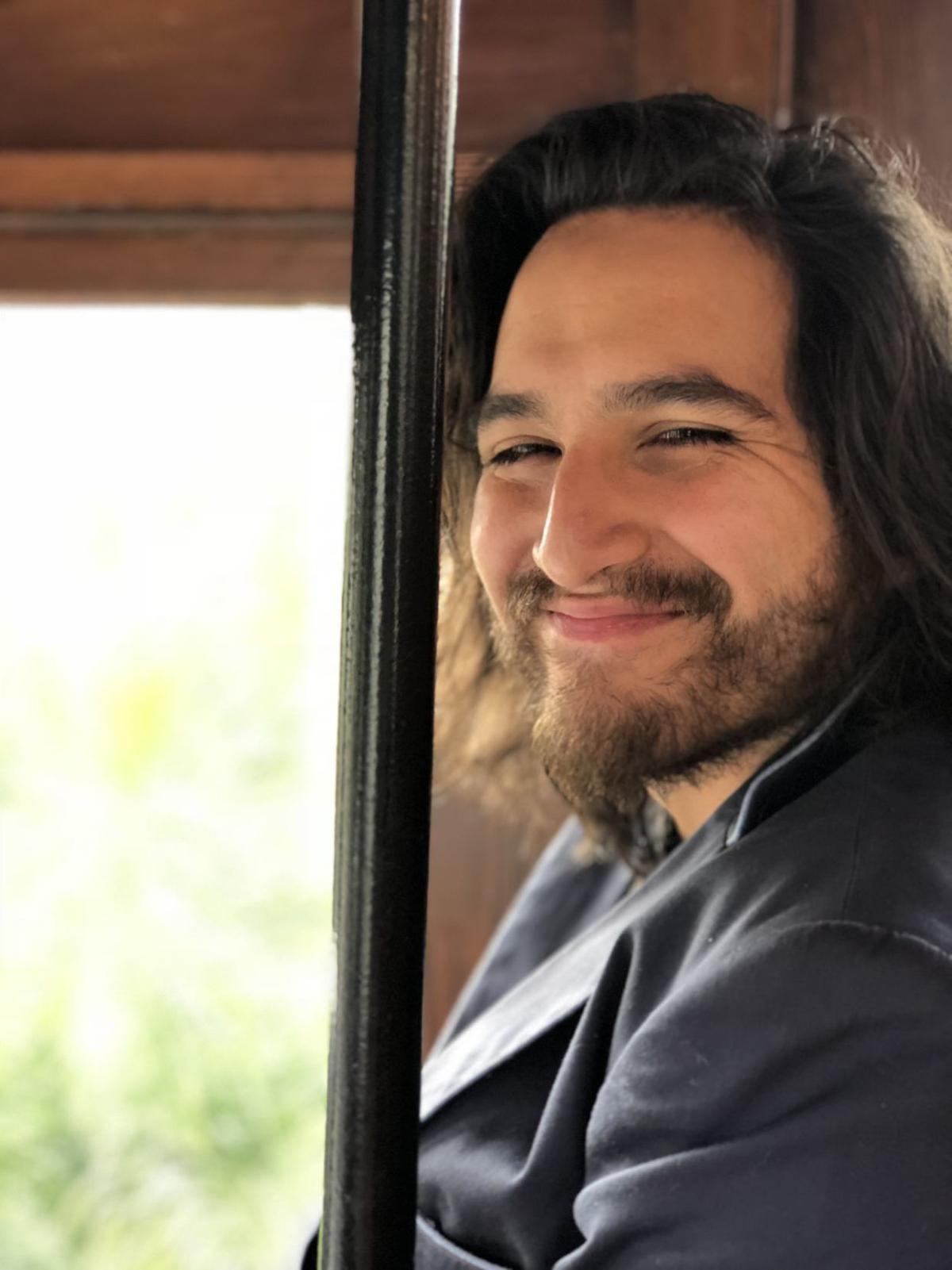 “Gentefied,” co-created and directed by Bakersfield native Marvin Lemus, premiered on Netflix in February 2020. The 10-episode Spanglish series captures the ways gentrification and ongoing wealth inequality affects a Mexican-American family living in Los Angeles. Despite being centered in Boyle Heights, Lemus found pockets to bring Bakersfield to the forefront. Take for example a conversation between Nayeli (a brown Chicana in the early stages of middle school crushes) and Norma (a Salvadoreña queer woman who works at Mama Fina’s Tacos restaurant):

Nayeli: How far is Bakersfield?

Norma: Bakersfield, Woo! [Exhales] Like, two hours? What you know about Bakersfield?

Nayeli: Well, Danny lives there. So does Dolores Huerta. She’s the one who came up with the “Si Se Puede” (Yes, we can!”)

Norma: Yet, no se puede (they can’t) correct the history books.

Or Larry Itliong, Philip Veracruz and the hundreds of Filipino/Filipina Americans for that matter, who just a few decades ago forged with fellow Mexican-American farmworkers like Huerta and Cesar Chavez to create a multiethnic, cross-racial labor movement. As many of my students have shared since I arrived at CSUB in fall 2017, “I have lived in (Bakersfield, Delano, Arvin, Shafter, Lamont, Taft) all my life but I never learned about these histories/herstories.”

One student actually learned more about Kern County’s contributions by leaving and learning that story elsewhere.

Norma is right: There is something about the U.S. education system that has yet to take ownership of the rich, transformative and fascinating contributions that black, indigenous people of color (BIPOC) and communities have made to local, regional and national history.

At just under 400,000 people, Bakersfield is Kern County’s most populated city, and therefore its most racially diverse. Accordingly, the city is home to 1.59 times more Latinx residents (approximately 197,000 people) than any other racial group (124,000 white alone, 30,000 black or African-American, 23,800 Asian alone and 998 American Indian and Alaska Native alone).

But demographics only tell a part of the narrative. Prior to becoming an agriculture and petroleum-producing epicenter, Bakersfield was, and remains, Yokuts land. For all of us who call Bakersfield “home,” we must remain cognizant and reflective that any claim to land and space in Kern County is inherently a racialized, colonialist project.

Yes, we are diverse (geographically, culturally, ethnically, racially), but are we capable of appreciating, valuing and learning from what makes us “diverse” without first a critical reckoning of the origins and development of settler-colonial racism and white supremacy in dominant U.S. culture, ideology and institutions? Without a holistic, critical and intersectional analysis of American history and society, the importance of studying, preserving and respecting the over 73 different cultures that coexist in Kern County will continue to remain outside the history books and our collective political consciousness.

At a time when Kern County can become the deadliest county in the U.S., can welcome GEO-backed proposals to expand private detention centers, and can exhibit discrimination and harassment against our LGBTQ (lesbian, gay, bisexual, transgender, queer) and nonbinary high school students, we need to ask: What kind of community does Kern County want to be and how will we learn from our historic past to better frame the present and inform the future?

Ethnic studies — the grassroots movement that powerfully reenvisioned education 50 years ago — provides the means to combat inequality, injustice and ignorance. Professor Emeritus Christine Sleeter in “The Academic and Social Value of Ethnic Studies” noted: “Rather than being divisive, ethnic studies helps students to bridge differences that already exist in experiences and perspectives. In these ways, ethnic studies play an important role in building a truly inclusive multicultural democracy and system of education.”

Put simply, both students of color AND white students become better thinkers and people after taking ethnic studies. Therefore, if we seek to preserve and respect Kern County’s diverse cultures, we desperately need ethnic studies at the K-12/higher-education levels across the Central Valley. As we continue to witness battles for who belongs and who does not, and for which stories can be taught and which might become banned, ethnic studies is a portal for truth, peace and reconciliation.  

Jorge Moraga is assistant professor of interdisciplinary studies at California State University, Bakersfield. He earned his Ph.D. in American studies with an emphasis in Latina/o studies, critical sport studies, and media and cultural studies. He is the proud son of two selfless Salvadoran immigrants. The views expressed are his own.

For more, check out two recent efforts that have sought to study, preserve and protect the different cultures found in Kern County: “American Migrant Stories,” a documentary directed by Andrés y Manuel Orozco, and “The Long Journey: A History of U.S. Immigration, from 1790 to Present,” a now digitized exhibit at the CSUB Walter Stiern Library. 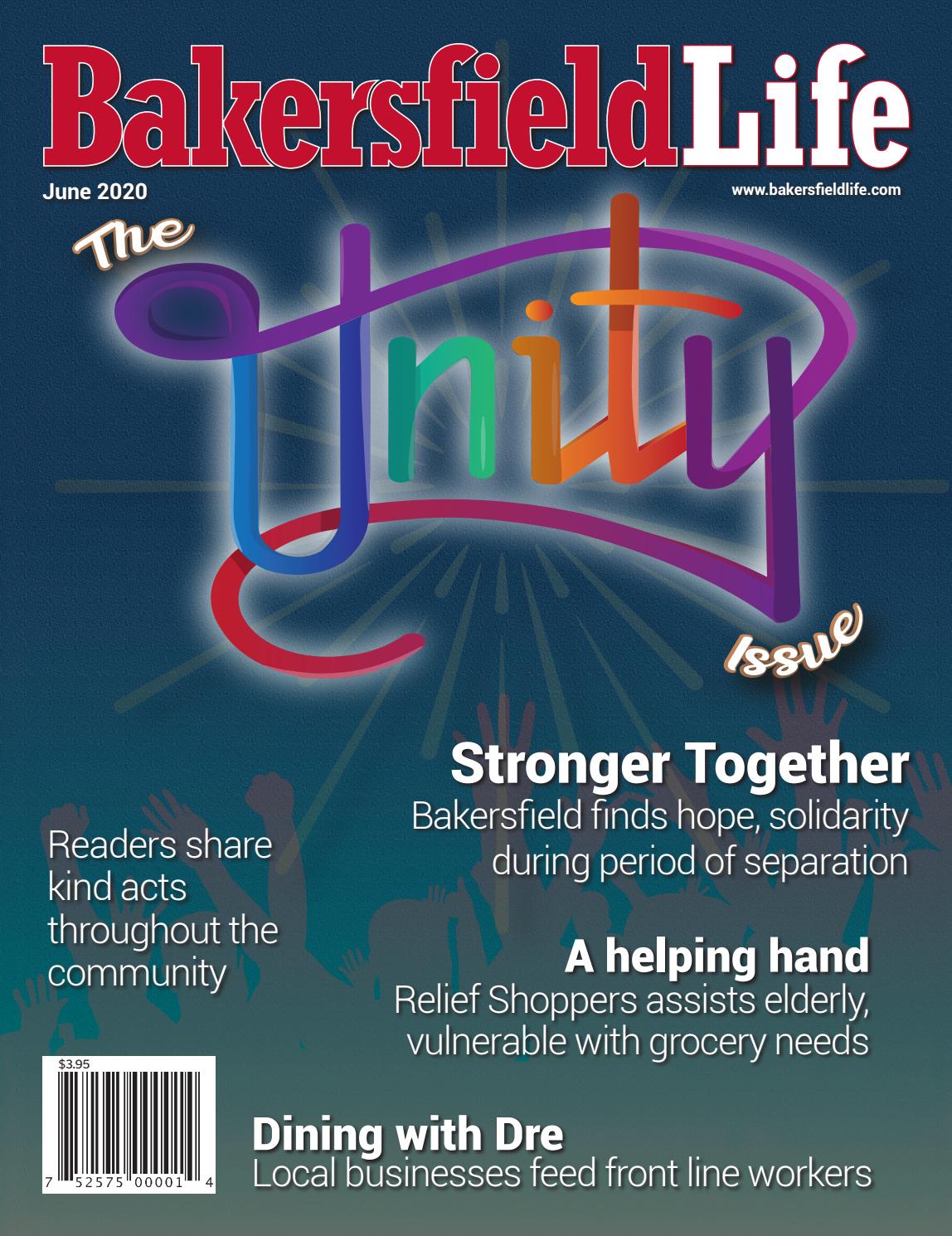