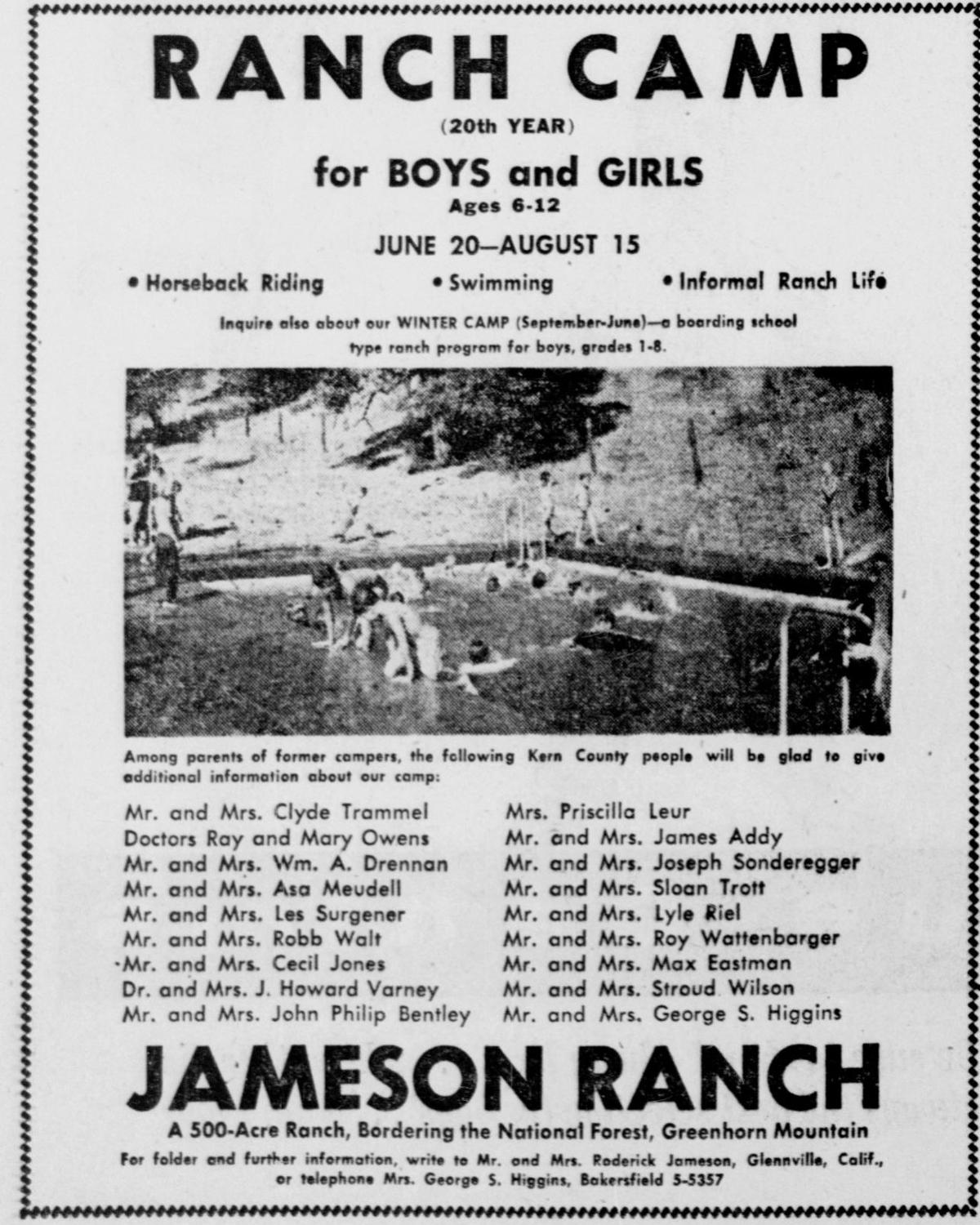 Life at Jameson Ranch Camp has brought joy to generations of children from Kern County and beyond for over 86 years. Just as the camp may be a summer tradition for many, for the Jameson family it represents a living legacy.

Jameson Ranch Camp has been a part of the Jameson family since 1934. The Jamesons are one of Bakersfield’s pioneer families dating back to the early 1870s. The family patriarch, William T. Jameson, first settled in Kern County in 1874 in Glennville and in 1876 the family moved to Bakersfield. His son, Frank H. Jameson, was the father of Virginia, Roderick, Muriel, Rex, David and Donald.

The camp had humble beginnings. Under the direction of Miss Virginia Jameson, the camp hosted its first group of guests during the summer of 1934. Located on the summit of Greenhorn Mountain, the number of campers was limited to just a dozen children between ages 6–12. Miss Jameson would continue to run the camp until 1938 when her brother Roderick graduated from the University of California, Berkeley. Eventually, Roderick and his wife, Catherine, would take over operations and under their direction the camp would continue to thrive and grow.

In fact, it did not take long for the couple to expand the camp when, in 1941, they purchased 500 acres of land. But this was not just any piece of land as it had historical significance to the family. The land that Jameson Ranch Camp continues to sit upon, according to the June 10, 1966, Bakersfield Californian, “once belonged to Jameson’s grandfather, Henry Bohna, son of Christian Bohna, who built the first house in Bakersfield.”

On June 7, 1942, Jameson Ranch Camp opened its doors to a new (and the current) location 7 miles from Glennville and about 47 miles from Bakersfield. The couple, along with their 3-month-old son, Connor; Mr. Jameson’s mother, Christine; and others helped host the campers at the new site.

While the number of campers continued to grow, so, too, did the variety of activities offered. The most popular was horseback riding, but the children also enjoyed wagon journeys, drawn by two favorite horses named Sage and Jack. They also enjoyed hikes, informal nature study, chores and jobs around the ranch, picnics, cookouts and swimming.

Jameson Ranch Camp added a winter session in 1945. Open to boys in grades first through eighth, the winter camp, which took place during the school term, offered a boarding-school-type ranch program. Activities included horseback riding, caring for the ranch’s animals and winter sports. The Dec. 31, 1949, Californian informed readers that “the winter camp is especially popular for children of working parents and for those who need routine ranch living or extra tutoring.”

Eight decades after welcoming its first guests, Jameson Camp Ranch, now under the direction of Roderick and Catherine’s granddaughter, Erica, along with her parents, Ross and Debby Jameson, and family friend and past camper Caitlin Latta ensure that the family legacy continues to be home for generations of campers to come.