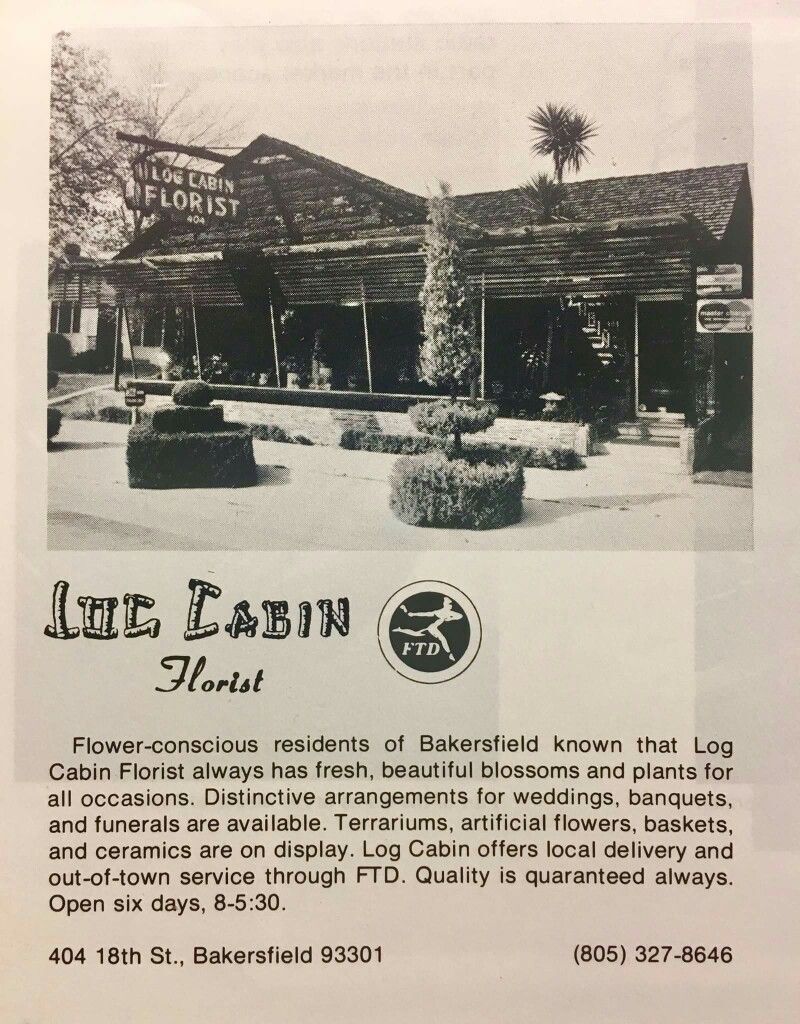 An advertisement announcing the opening of Log Cabin Florist appears in a November 1938 Bakersfield Californian issue.

An advertisement announcing the opening of Log Cabin Florist appears in a November 1938 Bakersfield Californian issue.

In 1157, poet Thomas Tusser wrote in “A Hundred Good Points of Husbandry,” “Sweet April showers Do spring May flowers.” In our modern way, we say April showers bring May flowers, and since 1938 Log Cabin Florist has been bringing flowers to the community — and not only in May.

Log Cabin Florist has a long and storied history in Bakersfield. While it is not the city’s first florist, it is certainly its longest operating. The original proprietors of the shop were James and Eva Riggins. James Riggins had worked in the floral industry for several years prior to opening Log Cabin Florist. In 1933, with partner Barney Finger, James Riggins opened The Flower Shop, and by 1935, Riggins managed the new floral department at Valley Nursery, then appropriately renamed Valley Nursery and Florist.

After 10 years in the business, Riggins formally opened Log Cabin Florist on Nov. 26, 1938. Located at 424 Eighteenth St. in the former location of Miller’s Flowers, the Nov. 25 Californian reported that the shop would remain open until 9 p.m. for visitors to come inspect and enjoy the special display of potted plants and cut flowers featured for the grand opening. Opening day specials included Pompom chrysanthemums for 25 cents a bunch and a dozen large chrysanthemums for just $2.

In 1946, James and Eva Riggins moved the shop to a new location at 404 West Eighteenth St. Log Cabin Florist not only served the needs of the community for all occasions, the Riggins made the shop an integral part of Bakersfield’s women’s clubs’ events. Floral arrangement demonstrations were frequently given in which the April 12, 1949, Californian informed readers that Riggins presented a “very outstanding arrangement” of lavender and bronze tulips arranged in a crystal bowl where he “opened each petal so that all flowers were full blown.”

During World War II, Eva Riggins held the business together when James Riggins was sent off to war. The little shop thrived and when he returned the couple continued to keep the shop running until 1968 when they sold it to longtime employee Jerry Beckwith and his wife, Terry. Just as James Riggins had, Jerry Beckwith continued the tradition of floral demonstrations for Bakersfield’s various women’s clubs, and in 1972 he was named winner of Florist magazine’s Design of the Month Contest for June, beating entries from as far away as Australia. His winning entry was a tropical arrangement of anthurium and bird of paradise, ti leaves and palm fashioned in a natural bamboo basket. Beckwith told the June 23, 1972, Californian that he found that particular arrangement to be a customer favorite due to the longevity of the flowers used.

Now owned by Dawn Baumgarten, Log Cabin Florist, located at 800 19th St., continues the quality and beauty expected of an arrangement set by the Rigginses and Beckwiths. As it has for generations, Log Cabin Florist puts the customer first. Baumgarten has also proudly established her own tradition for the shop as Bakersfield's Best Florist from 1994 to 2017 and as a recipient of the Good Customer Service award.