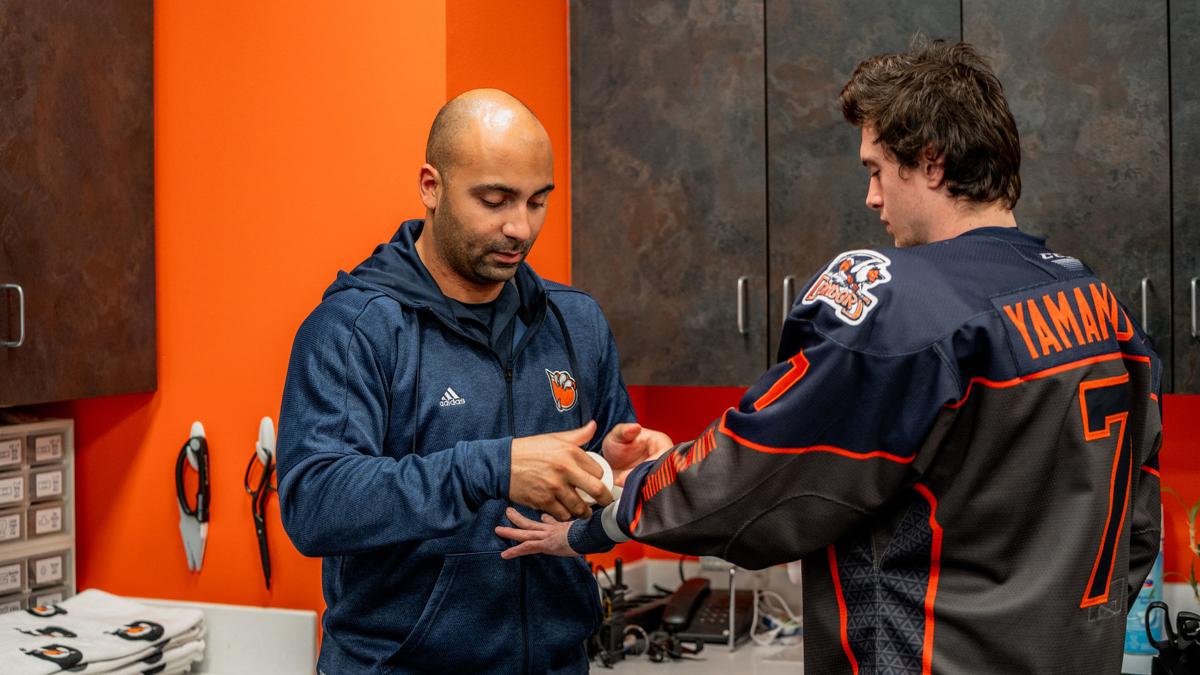 Bakersfield Condors head athletic trainer Chad Drown tapes the wrist of Kailer Yamamoto prior to a game against the Grand Rapids Griffins. 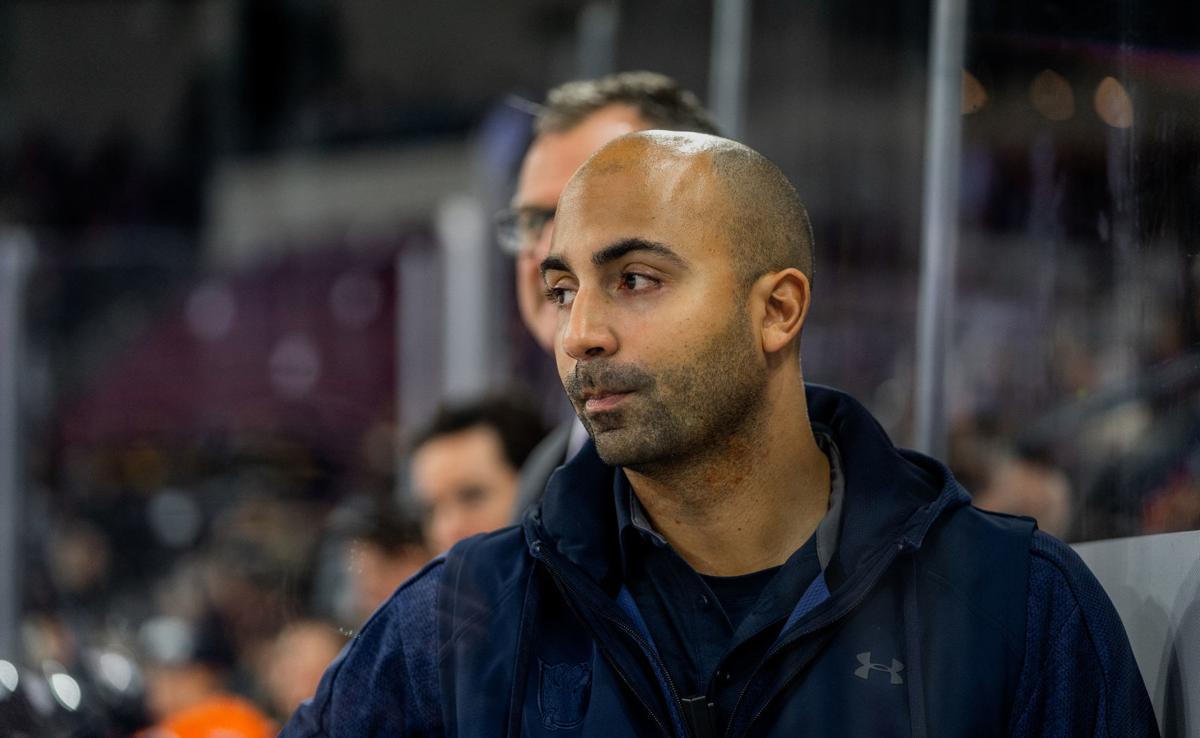 Bakersfield Condors head athletic trainer Chad Drown tapes the wrist of Kailer Yamamoto prior to a game against the Grand Rapids Griffins.

Chad Drown always knew that he wanted to do something involving hockey when he was finished playing the sport after graduating from high school in Waterloo, Ontario, Canada.

At first, it was working as a referee. But, ultimately, Drown decided to pursue a career as an athletic therapist/trainer.

The 31-year old, now in his second year as the Bakersfield Condors head athletic trainer, enjoys just about everything involved in his highly demanding but extremely rewarding job.

Drown, who holds a bachelor’s degree in health sciences in athletic therapy from Sheridan College in Ontario and a master’s degree in sports psychology from California University of Pennsylvania, is the person primarily responsible for the health and physical well-being of the Condors players, on and off the ice.

“My job is to keep them on the ice,” Drown said. “Keep them healthy. If they get hurt, to get them back on the ice as quickly and as safely as possible. But at the end of the day, my job is to make sure everybody goes home.”

It’s a 24-hour, seven-days-a-week job for Drown. During the season, on days when the Condors don’t have a game but are practicing, Drown arrives at the arena at 6 a.m.

His duties include setting up and checking the functionality of all the emergency equipment, preparing the hot tub and cold tub, checking in with the Condors coaching staff to review any specific plans involving limitations or restrictions that certain players might have for that day, setting up hydration (each player has an individually labeled water bottle), doing a combination of treatments on injured players, guiding healthy players through pre-practice exercises designed to alleviate soreness and taping players in preparation for the workout.

During practice, Drown is on the bench watching intently since he’s the first responder for any type of injury or medical emergency that occurs on the ice.

After practice, Drown does post-workout treatments on players and then tends to his extensive administrative duties.

If a player needs to see a doctor or dentist, he’s the person responsible for coordinating the appointment.

“These are hockey players and they put their bodies through a whole lot more than most people could ever imagine,” Drown said. “There’s usually something wrong with everybody. Someone is always going to have something going on. It’s my job to make sure what they’ve got going on isn’t going to get worse and to make sure we’re doing things right to get things better.”

Drown grew up in Waterloo, a city of roughly 100,000 people, located about an hour west of Toronto.

After learning to skate at age 5, he played youth hockey and then at Bluevale High School.

Drown was an aggressive player but not good enough to play beyond high school.

Following graduation in 2008, he began refereeing junior hockey. After one year, Drown was hired by the Ontario Hockey League to be a linesman. He eventually worked his way up to be a Level 5 referee.

While that was going on, Drown, whose mother, Cathy, is a registered mental health nurse, worked toward getting his bachelor’s degree.

At one point, he suffered a concussion while refereeing a game, which caused his educational process to be slowed down.

“It was a very trying time,” Drown said. “It wasn’t fun at all. I had to have a lot of different people’s support around me to get me through that. But I was better for it in the end.”

Drown, who drove a recycling truck for a waste management company during the summers while he was in college, completed his bachelor’s degree in 2014.

By the time he earned his master’s degree in 2016, he was already working as the head athletic trainer for the Guelph Storm of the OHL.

Drown spent the 2017-18 season as an assistant athletic trainer with the American Hockey League’s Tucson Roadrunners.

He joined the Condors prior to the start of last season.

“I love what I do,” Drown said. “I love working with the players. It’s fun. The good times are good and the bad times are challenging. That’s why I like this job. There’s never a day that’s the same. There’s always something different that happens.”

For Drown, working for the Condors is something he enjoys for many reasons. He especially likes getting to travel to new places and work in what he describes as a family type of atmosphere.

But the best part of his job is helping injured players return to action.

“When you take a guy who you’ve been with since day one through his injury and you’ve been through the sweat and the tears and frustration of rehab and then you see them go out there and smile and do their thing, that’s the most rewarding thing I think,” Drown said.