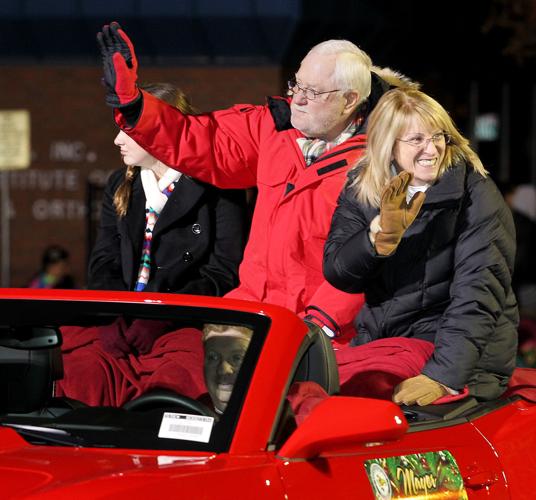 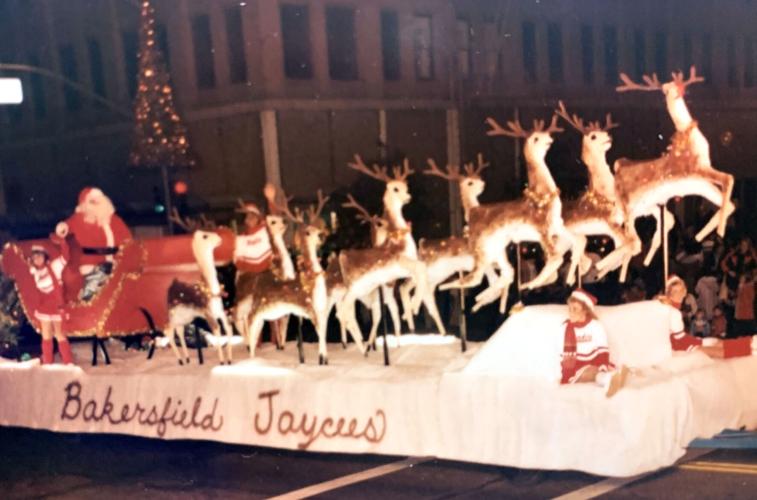 After a 10-year hiatus, the Bakersfield Christmas Parade made its return in 1983, featuring the Santa Claus float. 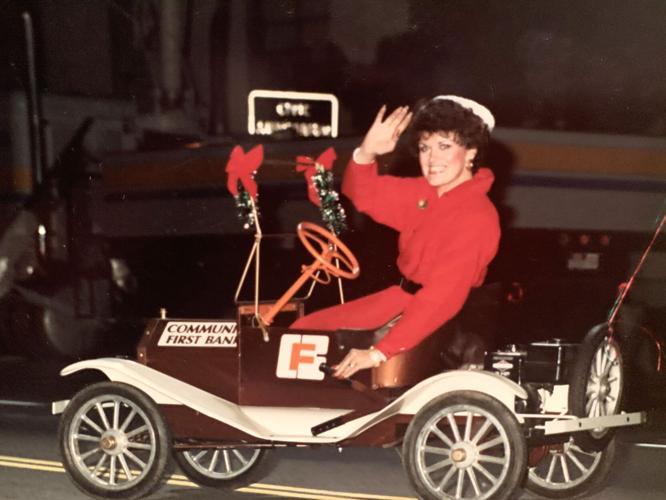 Cathy Butler has served on the Bakersfield Christmas Parade committee since 1983. 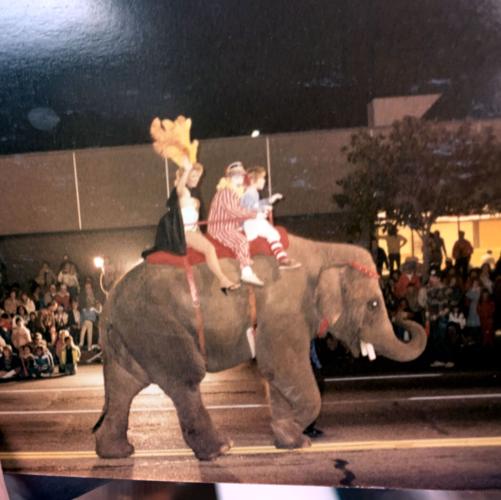 An elephant was a part of the Bakersfield Christmas Parade in 1983. 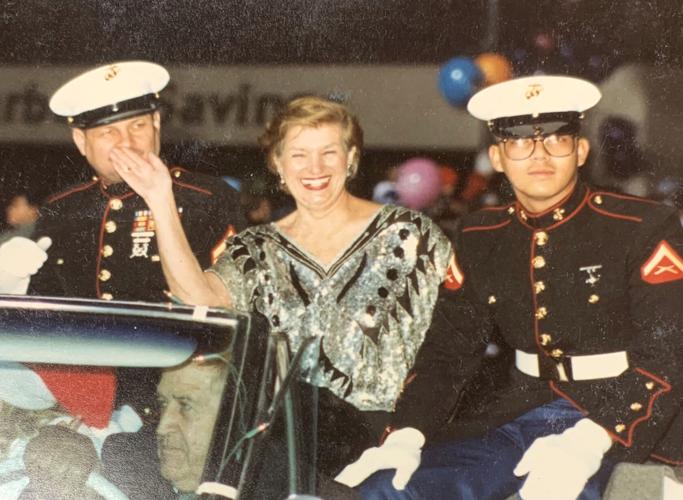 Former Bakersfield Mayor Mary K. Shell waves to the crowd during the Bakersfield Christmas Parade in 1984. 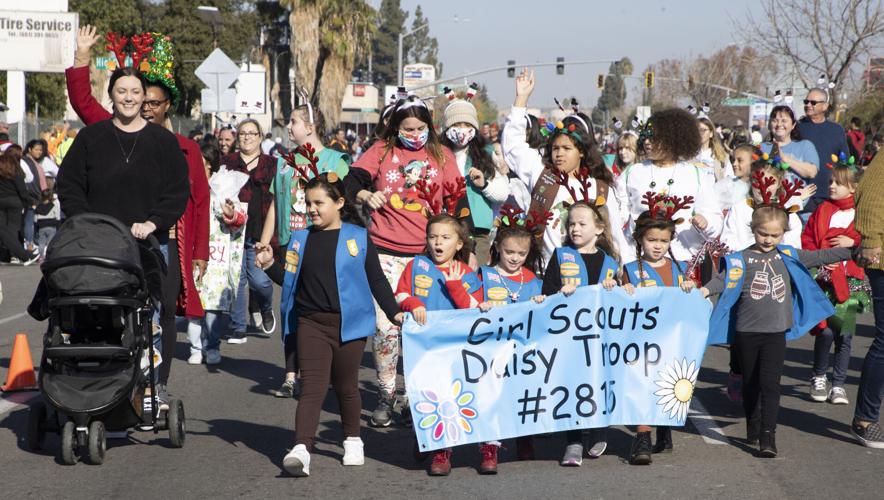 A Girl Scout Daisy Troop marches before the crowd during the North of the River Christmas Parade last year. The parade has no motorized floats. 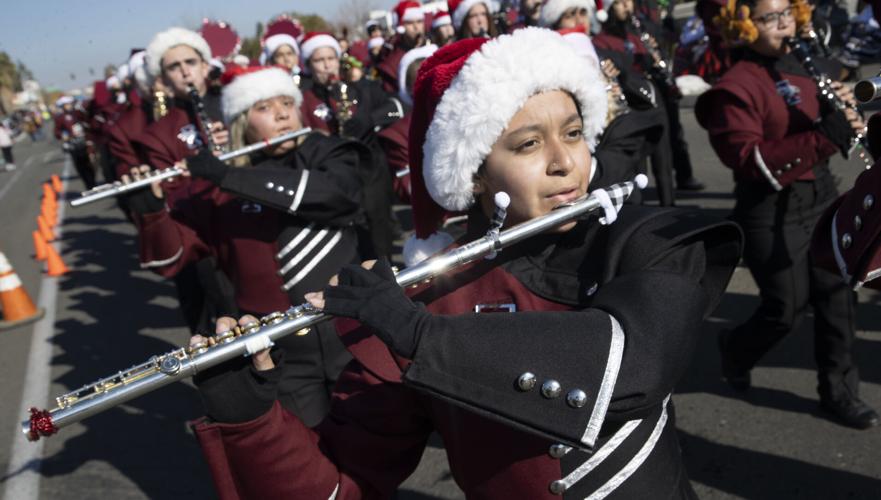 The Independence Band performs during the North of the River Christmas Parade last year. The parade features no motorized floats. All entries are on foot.

After a 10-year hiatus, the Bakersfield Christmas Parade made its return in 1983, featuring the Santa Claus float.

Cathy Butler has served on the Bakersfield Christmas Parade committee since 1983.

An elephant was a part of the Bakersfield Christmas Parade in 1983.

Former Bakersfield Mayor Mary K. Shell waves to the crowd during the Bakersfield Christmas Parade in 1984.

A Girl Scout Daisy Troop marches before the crowd during the North of the River Christmas Parade last year. The parade has no motorized floats.

The Independence Band performs during the North of the River Christmas Parade last year. The parade features no motorized floats. All entries are on foot.

The late Harvey L. Hall, Bakersfield’s longest-serving mayor, was known for many reasons and for many achievements.

When it came time for the Bakersfield Christmas Parade, he became known as "Mr. Christmas." He was part of award-winning floats for two years when the parade made its return in 1983 after a 10-year hiatus. Then he became parade coordinator.

This year, Hall’s widow, Lavonne Hall, will be the grand marshal of the parade on Dec. 1, when Harvey L. Hall will be remembered and honored for his longtime work with the parade that will celebrate its 40th year.

“He loved everything about Christmas,” Lavonne Hall said. “He loved to decorate at home. At one point, we had nine Christmas trees (at home). He just absolutely loved it."

At the Hall Ambulance campus on 2001 O St., Harvey L. Hall enjoyed transforming the entire area inside and out with Christmas decorations on the first Monday after the Thanksgiving weekend.

In short, Christmas was his favorite holiday.

He was highly instrumental in maintaining the Bakersfield Christmas Parade after it made its return in 1983, said Cathy Butler, director of public relations for the Downtown Business Association.

Butler has been on the parade board since 1983, and said Hall was “a big part of the parade.”

“It was a team effort,” Butler said, explaining how the parade returned after a 10-year hiatus. “I’m just glad we were able to bring it back because it’s a special tradition.”

This year, Butler said, the parade board expects the event to be back to full capacity after being under COVID-19 restrictions the past two years.

“We’re all still hanging in there,” Butler said of the efforts made the past two years that included a virtual event in 2020, when 30 entries submitted video presentations.

The former mayor always enjoyed promoting his motto for Bakersfield, “Unity in our community.” A reflection of that famous quote will be displayed at the 40th Bakersfield Christmas Parade.

Harvey L. Hall was meticulous with his planning as coordinator of the parade, said Lavonne Hall. His attention to detail could be seen in his precise planning that included avoiding any large gaps between floats because he knew the parade was being televised.

“Everybody had their role,” she said. “Everybody knew exactly what to do, when to do it, how to do it. He loved it. When he was running the parade, he had his clipboard and he would walk every inch of the setup. He would talk to everybody.”

He also had custom-made sweatshirts stitched for each year that included the year’s theme on it.

At this year’s parade, Lavonne Hall will ride with a parade float that will feature three themes, including a re-creation of the old Brock’s downtown department store that was known for its extravagant window displays during the holidays.

Also, in remembrance of the late Everett Goodwin, who played Santa Claus for several years, the float will feature a scene from a shopping mall that has the photo opportunity with Santa.

The float will also have a large train set, a re-creation of one of the first floats that Harvey L. Hall entered in the Christmas parade.

“He was always excited when there were more entries than the previous year,” Lavonne Hall said. “He would say something like, ‘Well, last year we had 104. This year we have 109.”

Here are some more parades taking place around Kern County.

The 44th annual parade will take place on the Saturday after Thanksgiving, making it the first of many parades held throughout Kern County.

The theme is "A KV Hometown Christmas."

The Kern River Valley has about 15,000 residents. The community includes ranches surrounding  Isabella Lake. That area is seen in the parade entries, which includes farm animals (think goats). There will also be a youth pack mule team and a U.S. Forest Service entry with firefighting equipment and Smokey the Bear.

Because the parade is held at night, participants plan to include plenty of lights with their entries.

The grand marshal for the parade is Yvonne Pickerell, who operates KRV Toys for Tots.

The Shafter Lions Club will conduct the parade. The fun begins at 4:30 p.m. with bounce houses, food and music at Manuel Park. Photos with Santa Claus start at 7:30 p.m

The downtown Christmas parade includes a tree lighting at Wasco High School auditorium. The route is on Broadway Street to Poplar Avenue.

The parade is presented by Orange Heart Foundation and Wasco Rose Festival.

It's an annual celebration of Delano's Old Fashioned Christmas.

The parade starts at the fire station and travels on 2nd Street to Central Park and ends at Delano Light the Night.

The parade along F Street is part of the Tehachapi Hometown Christmas, a daylong celebration that includes an ugly Christmas sweater contest, Toys for Tots unwrapped toy drive and a Christmas tree lighting at the Historic Depot Museum at 6:30 p.m.

The Rotary breakfast with Santa starts at 8 a.m. at Aspen Gym West Park. Photos with Santa and a bake sale take place at 11 a.m. at the Tehachapi Depot.

The 77th annual parade's theme is "Home for the Holidays." The Taft Chamber of Commerce conducts the parade and will accept entries until Nov. 30. The parade begins on Center Street and travels south.

The Taft parade has come a long way since 2020, said Chelsi Perry, the Taft Chamber of Commerce's event coordinator.

As a matter of improvisation due to COVID-19, Taft had a "reverse parade" in 2020. The floats were parked on a street downtown, and people drove by to see them, Perry said.

"We're expecting to be pretty big this year," she said.

The parade will be rescheduled to Dec. 8 if it rains Dec. 5, and the road conditions are not suitable to hold the parade.

The 53rd annual parade is sponsored by the Ridgecrest Elks Lodge. This year's theme is: "Peace, Love & Joy."

This is not a competitive parade. Entries will not be judged. However, each entry receives a participation ribbon as a memento.

North of the River

The 49th annual parade takes place on North Chester Avenue between China Grade Loop and East Norris Road. The Grinch will be the theme.

"We are celebrating Grinchmas," said Jasmin LoBasso, superintendent of recreation and community services for the North of the River Recreation and Park District. "We have some of our old-time favorites, too. Santa Claus will be there. We will have the wonderful Grinchmas theme throughout."

LoBasso said the uniqueness of the parade is wonderful. There are no motorized floats. Everyone is on foot.

"This is a very accessible parade," LoBasso said. "In a lot of ways this parade has a wonderful community feel to it because of that."

The parade features the 41st annual McFarland Christmas Run. The deadline to pre-register for the run is Dec. 2. The race start time is 10 a.m. This has become one of the historic and traditional favorites following the footsteps of McFarland USA runners.