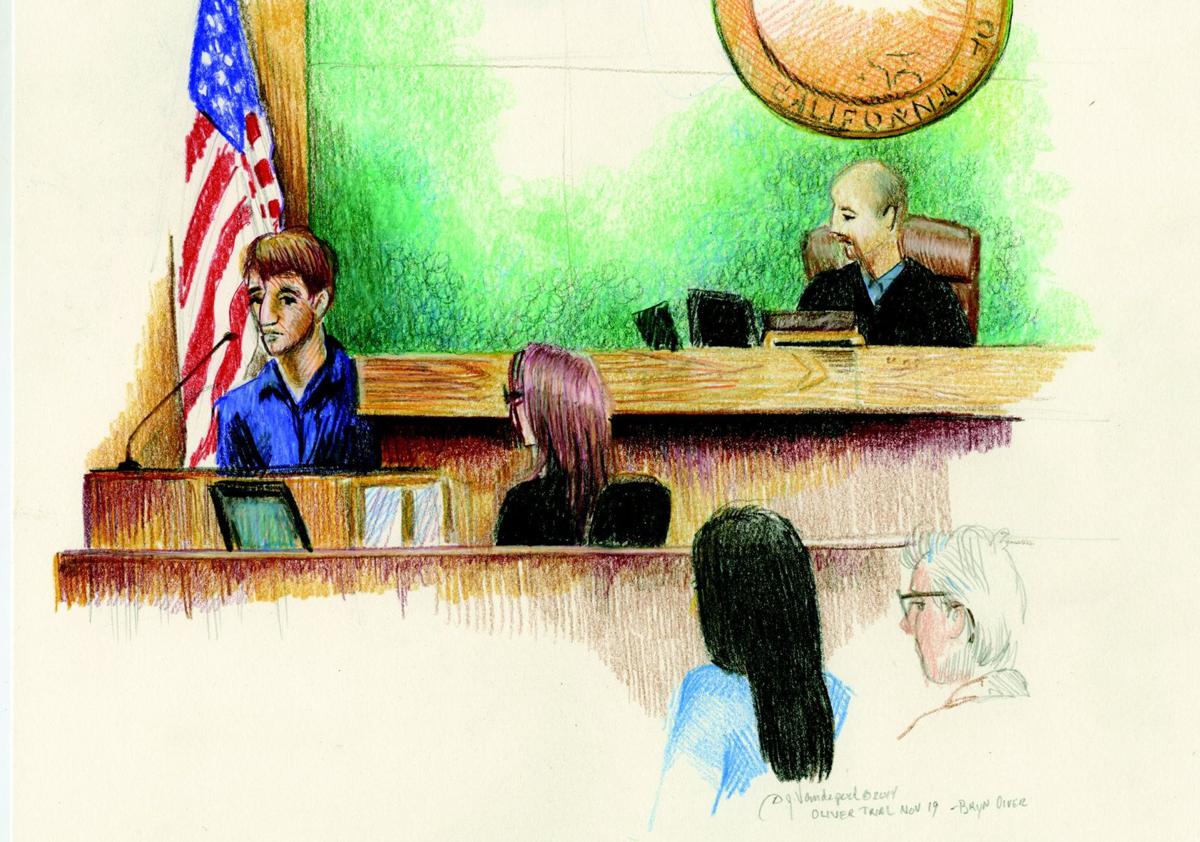 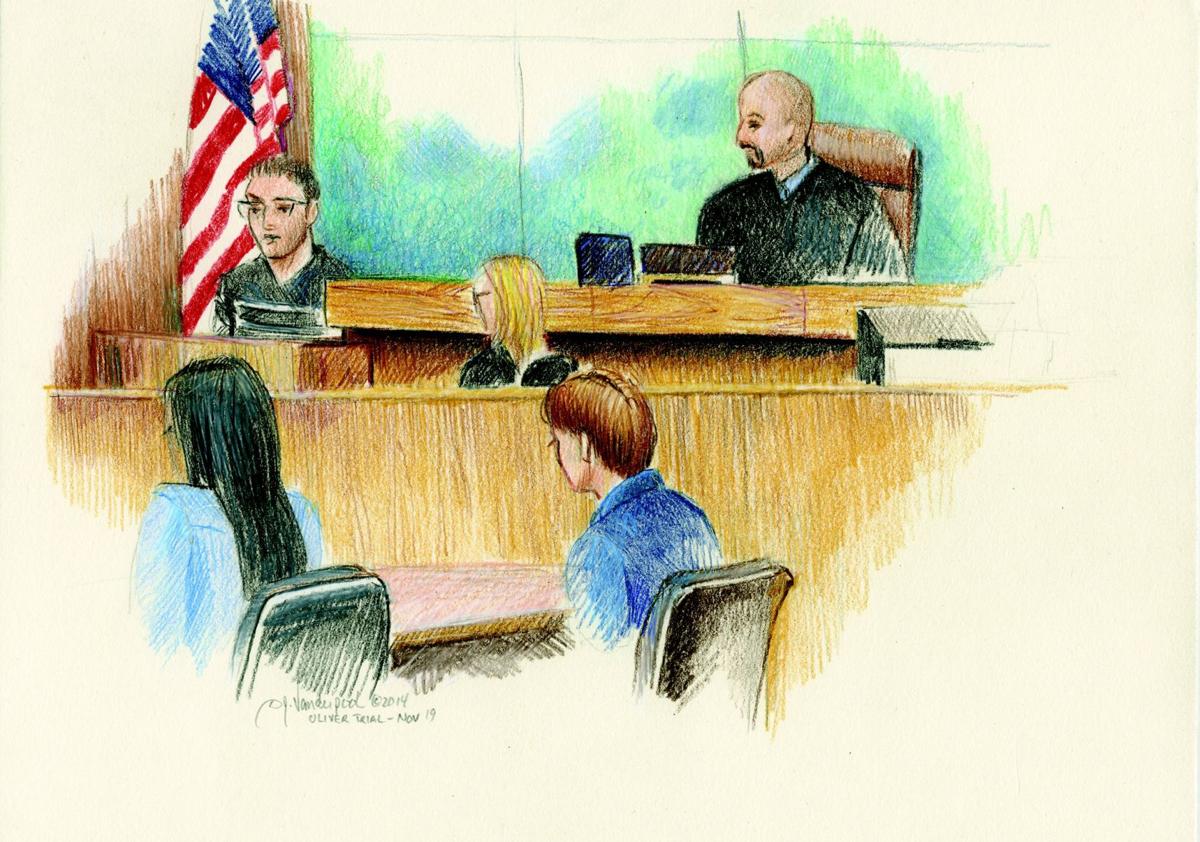 Bryan Oliver took the stand in his trial on two counts of attempted murder Wednesday and said he was sorry for opening fire with a shotgun in a Taft Union High School classroom the morning of Jan. 10, 2013.

Oliver said he hopes Bowe Cleveland, whom he shot in the chest, recovers from his injuries. He said he never intended to kill Cleveland nor the other student, Jacob Nichols, whom he’s accused of shooting at but missing.

During his four hours on the stand Wednesday he spoke softly with little intonation, occasionally taking sips from a cup of water.

He testified he has no memory of loading his brother’s shotgun, filling his pockets with extra shells and walking to school that morning. He said he blacked out from the moment he removed a disc from a DVD player at his home to the moment he was standing in the classroom with the shotgun in his hands.

Under cross-examination from Chief Deputy District Attorney Mark Pafford, Oliver admitted to talking with other students about school shootings. He said he was suspended in 2012 after discussing a dream he had years ago while living in Tennessee in which he donned body armor and armed himself, entered the school auditorium and killed all the bullies.

Pafford pointed out a number of similarities between Oliver and the main character in a story Oliver wrote his sophomore year called “Phycopath” (sic). Pafford said Oliver posted a portion of the revenge tale online the day before the shooting.

The character, named “Demian,” has both a younger and an older brother, as does Oliver. Both Demian and Oliver were bullied in high school, and both wanted to join the U.S. Army.

And Demian, like Oliver, blacked out before committing a shooting. Oliver told Pafford he included some parts of himself in the character, but that it’s not him.

Pafford asked Oliver if the story was his final manifesto. Oliver responded it was “just a story.”

Oliver testified the first shot he fired — the one that struck Cleveland — snapped him out of his blackout state. He doesn’t know why he then fired a second shot, and said that shot might have been fired in the direction of Nichols.

In addition, he testified he also has no memory of placing a knife in one of his shoes and a screwdriver in the other.

“I remember nothing,” Oliver said in response to questions from his attorney, Deputy Public Defender Paul Cadman.

There’s no dispute Oliver is the person who fired the shots at Taft High. Cadman, however, is arguing Oliver has been overcharged and did not have the mental intent necessary to support the prosecution’s charges of attempted murder.

Under questioning from Cadman, Oliver said he has been bullied since attending middle school in Tennessee. His family moved to Taft a few years before the shooting, but the bullying continued.

Oliver, 18, testified he was called a “ginger” and “fire crotch” in reference to his red hair. He said classmates also called him a “faggot” and “queer,” both derogatory terms against homosexuals.

Oliver said he’s homosexual and has struggled with it since high school. But he also said he kept his homosexuality a secret and didn’t believe anyone at school knew he was gay.

Other students at Taft High would knock his hat off his head and shove him, he said. One incident in particular received considerable attention Wednesday.

Cadman asked Oliver to describe what happened to him during a gym class in 2011. Oliver said a few students backed him up against a wall and began punching it to get him to flinch.

He said he told them to stop, but they continued. Finally, he knocked the hat off the head of one of the students.

Oliver said he and that student fought and he was brought to the ground. Then one of the other students, in an act called “teabagging,” placed his genitals on Oliver’s face. Oliver testified he felt violated and told school officials what had happened verbally and in writing. The bullying continued.

Pafford has said there is no independent evidence that the incident occurred.

Oliver said the teabagging incident was the last time he fought back. By junior year, he felt “hopeless.”

“I knew it would not stop,” he said of the bullying.

The teen told the court he enjoys reading and writing, and is especially a fan of science fiction and “Gothic” stories, which he described as stories like those written by Edgar Allan Poe.

Oliver said he wrote “Phycopath” his sophomore year; the shooting occurred his junior year. He said there is no reference in the story to either Taft High or any students attending the school.

His writings never gave him violent thoughts toward people in real life, he said.

Pafford, who is prosecuting the case along with Deputy District Attorney Marcus Cuper, asked Oliver if he would, considering how hurtful he found the word, ever call someone else a “fag”?

Oliver said he couldn’t recall doing so. Pafford presented copies of text messages between Oliver and his brother, Jared Oliver, in which the two exchange insults. Oliver then admitted texting his brother and calling him a “fag” and “Jew fag” in anger.

Pafford also presented a text message exchange in which Oliver told a friend, “No im right as hitler was” (sic). He also wrote “kneel or be gassed,” and “bow or be gases” (sic).

Pafford asked Oliver if he had a fascination with Adolf Hitler. The teen responded he was interested in him as a part of history, but didn’t characterize himself as a fan.

Much of Pafford’s questioning focused on Oliver’s interests, including violent films and drawings.

Oliver testified he sometimes watched “vore” videos. Vore videos are an example of “vorarephilia,” a sexual fetish described in a November 2013 Psychology Today article as an experience “in which people are sexually aroused by the idea of being eaten, eating another person or observing this process for sexual gratification.”

Oliver said he was drawn to certain unorthodox sexual interests.

A vore video Oliver viewed on his computer was played in court. It showed an animated pony killing and removing the organs of another pony to bake in cupcakes. A rock song called “Ready to Die” plays throughout the video.

Oliver told Pafford he didn’t find the video sexually arousing. He said he’d commented positively about the video online because he found some of it humorous and very exaggerated.

Pafford asked if he enjoyed watching others suffer.

“I found (the video) funny, but I don’t find it pleasurable for real people to be hurt,” Oliver said. “That was not real.”

Oliver testified horror movies are one of his favorite types of film. He said sometimes they’re funny, like the original “A Nightmare on Elm Street” series where villain Freddy Krueger cracks jokes as he stalks his victims.

He said there’s an adrenaline rush during scary moments in horror films, and he never took them seriously.

At one point he described the special effects in some of the older films as “retarded.” Pafford asked him if “retarded” is an offensive word, much like “fag.”

Oliver said he didn’t mean it in a way as to be offensive to people with mental or physical handicaps. He said the word can be used in different way.

The jury was shown several pictures Oliver drew. A few depicted stick figure characters shooting each other; one featured a stick figure holding what appeared to be the severed head of another stick figure.

As to the students he targeted, Oliver said Nichols had bullied him his freshman and sophomore years of high school and was the “ringleader” of the teens who bullied him. He said Cleveland would say things to annoy him, and knew how to get under his skin.

Pafford asked if Cleveland ever physically bullied him, and Oliver replied “no.”

The prosecutor, who questioned Oliver for almost three hours Wednesday, asked the teen how he was able to load the shotgun, walk to school, use an alternate route to enter the science building and later correctly tell detectives six rounds were in the gun all while “blacked out.” Oliver maintained he had blacked out and the first thing he remembers is being in the classroom with the gun.

He testified he correctly guessed six rounds because that’s the most the shotgun holds.

Pafford then played portions of the several surveillance cameras at Taft High that captured Oliver walking onto the campus on Jan. 10, 2013 and then entering the classroom. There was no camera in the classroom.

The prosecutor pointed out several times where Oliver — who admitted being the person in the video — looked over his shoulder and around as if to see if anyone was watching him. Oliver said it could appear that way.

The image of Taft Union High School District was more important than the safety of students before, during and after a school shooting in 2013…